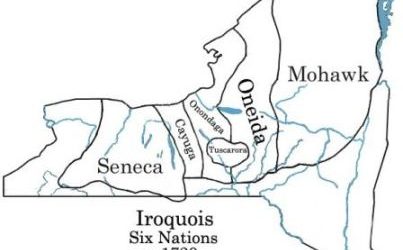 “The character of the French and British North American “empires” differed greatly. Although the French did war against the Iroquois, Natchez, Fox, and other tribes, they did not “conquer” New France; they merely paid very high tolls to the Indians for the privilege of exploiting it. Beyond their narrow ribbon of settlement between Quebec and Montreal, or ports like New Orleans and Mobile, the New France “empire” largely consisted of several scores of ramshackle trading posts, often isolated from one another by hundreds of wilderness miles and resentful Indian tribes. None of those tribes thought themselves French subjects and would have been incensed had it been suggested that they were. Nor did they think of the annual goods dispensed by the French traders as “gifts.” Of the goods received from the French, some were exchanged for “rent” and others for furs…”