What is a Euro-style game? 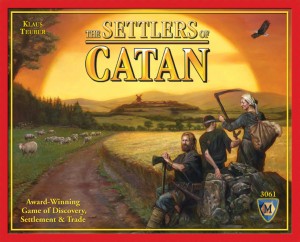 I’m a grognard* who plays the occasional Euro. Now it may be hard for some people to believe but not everyone knows what makes something a Euro-style game.

In my opinion a Euro (sometimes called a “German game”) has the following characteristics:

1. It is a game with little player interaction, which sometimes results in it having a ”runaway leader” problem.

That is, if there is no way to influence your opponent, how could you possibly stop someone winning who takes an early lead?

2. In a Euro game mechanics are king. And conversely their theme is short-changed, which occasionally leads to some awfully strange games, or at least, some awfully strange game titles. For example, while any particular Euro may be a variation on the standard blue blocks versus red blocks, in one they may be said to represent medieval farmers, in another ancient Egyptian merchants and somewhere else they are said to depict the mud people of the planet Mongo.

3. In my opinion, Euros typically lack pizzazz. In fact, I’ve never played a Euro where people shouted or cheered very much. It seems in a Euro luck, chance and emotions are kept to a minimum. In addition, games are made as “fair” as possible. In other words, one player doesn’t normally start on the defensive or with forces particularly different from what’s offered to others in the game. You just don’t find the equivalent of a Tiger tank versus 4 Shermans in a Euro.

4. Most Euros are heavily abstract, with rules that are short and to the point You can think of Euros as theme-flavored puzzles.

5. Their victory conditions are arbitrary, so as to keep the game’s length to a pre-determined maximum. Say 60 minutes or so typically. In a wargame, on the other hand, players normally don’t need “no stinkin’ victory conditions” to know who won.

To my mind the phrase “multi-player solitaire” describes most Euros perfectly.

Note: A grognard m (plural grognards) has been defined as