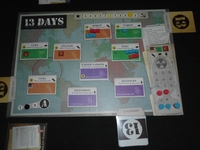 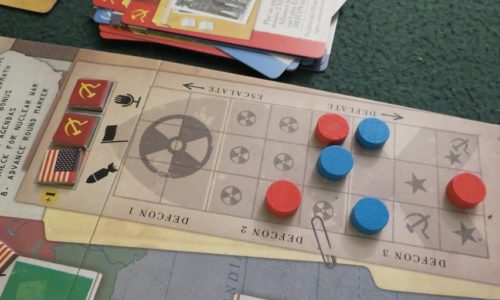 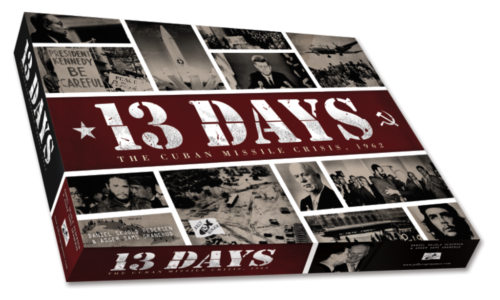 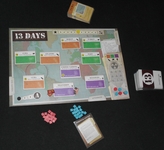 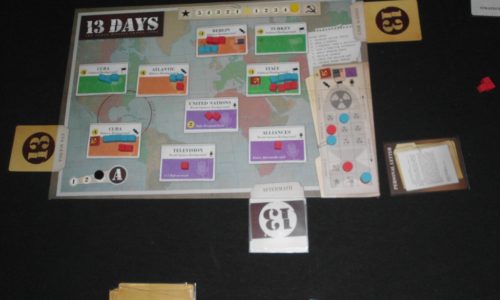 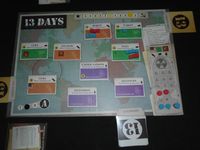 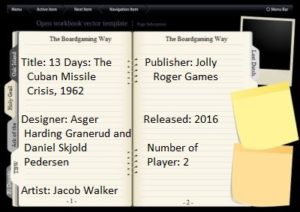 13 Days is a tight, fast two-player look at the events that brought the world closer to an all-out nuclear war than ever before, with one player taking on the roll of John F. Kennedy and the other Nikita Khrushchev.

The game box says it takes less than an hour to play, and that is absolutely true. It’s fast – just three rounds of play. There is a board to play on, but it’s not a regular map with ship markers and armies to move around, just nine boxes showing the three conflict areas of the time: the military,  the political and the world opinion battlegrounds.

For people who think the Cuban Missile Crisis was just about the United States putting a blockade around Cuba when Soviet missiles were found there by a U-2 spy plane, it might be a bit surprising to find Turkey, Italy and Berlin as areas where the battle between the two superpowers also played out.

But, there is very little that is simple in international politics.

For many in the United States, the Cuban Missile Crisis was a Cold War monster that seemed to come from nowhere – a storm centered 90 miles from the coast of Florida where the Soviet Union was bringing in nuclear-tipped missiles and the U.S. was warning it would never allow that to happen.

The U.S. Navy blockaded Cuba, the Soviet Union sent in ships, and – at the last minute – the Communists blinked and turned back. To save face, we said, the U.S. agreed to withdraw some of our nuclear-tipped missiles from eastern Europe.

Of course, it played out differently on the other side of the Iron Curtain, where the knowledgable insiders said that Khrushchev really wanted to get those U.S. missiles out of Europe, and the missiles in Cuba were just a ploy to get the U.S. to do what it wanted all along. 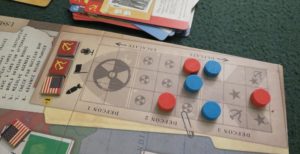 And the rest of the world held its breath for 13 days, or just watched in fear, or just decided to use the crisis for its own purposes. But, how do you put that all in a game, and one that plays out so quickly?

This game does it simply and elegantly, with cards and cubes.

You have to really read the game cards to catch the wave of history. You can argue just how many control cubes any particular action is worth, or how much prestige you should get from one or another of the actions called for, but that’s the genius of 13 Days. It sneaks the events of the Cuban Missile Crisis out in front of you while you are trying to push your opponent into losing. Score one for generating a whole revisionist historical debate into 45 minutes.

That aside, this game seems simple enough and plays smoothly. But be careful. Find the right person to play with and 13 Days can become addictive.

Each player starts out with 17 influence cubes to spread around those nine boxes, looking to take control of them. There is also a prestige marker, showing which player is getting more support for his actions, as determined by the cards they play. Prestige can only go up to five, no matter how many points the game gives you. And with only one marker, it means that when one player goes up, the other goes down.

So far, pretty routine. But start to play and 13 Days gets good really fast.

Each player moves their markers up and down on a Defcon chart – mostly up – depending on the cards played by them, by their opponent or because they have put too many cubes down in one place at one time. If a player shoots all the way to the top in any Defcon column – or has three markers (the political, military and world opinion) all on the Defcon level 2, they lose. End of game.

And you can go up quickly, since you move up in a Defcon column one space for each cube you put down in any battle area box (important exception – the first cube does not count).

It means that while the cards may allow you to put more control cubes in a box than your opponent, it will come with a risk as well as a reward.

The five strategy cards you draw at the start of each round tell you how many cubes you can place and where to put them, with the important phrase “up to” letting players decide how much of a defcon rise they want to risk. There are often some boxes on the side of the five cards, and you can simply put them down in the designated areas, but without the rest of the game action taking place. Each player get to choose for themselves how to use the cards, and some allow three or four cube to be placed in  multiple boxes.

Those cards are evenly divided between Russian, American and United Nations actions. Some will let you reduce your own Defcon level, or raise it for your opponent. If you draw an opponent’s Defcon card, you have to give it to them and let them play it. If they don’t want to, you get it back and generally you can then use the card to put out some of your own marker cubes.

(Strategy note: by the third round, it’s possible to run out of marker cubes, so getting that card back may not be any help to you.)

Along with five strategy cards each turn, the players also get three agenda cards, which  can have a big impact on the game. You keep one card – face down – and put the other two back, which means its really difficult for your opponent to guess your mission and thwart it.

They are played at the end of each round, generating prestige or moving defcon levels up or down. Sometimes a player needs to have more influence cubes in a particular area before their card can be played.

There is no rolling of dice in this game. Still, there is plenty of luck involved in the cards players draw. And, since the cards are all put back and reshuffled each turn, there’s no good way to predict which options players will be getting.

As a bonus for history buffs or for people of a certain age, there are lots of photos on the strategy cards that will bring a smile – Khrushchev and Fidel Castro embracing (you get to place two influence cubes in political battleground boxes) or Kennedy giving a wave and a smile. You get to move two US influence cubes from one box to another with that card.

And, since you can play the whole game in less than an hour, there’s usually time for another game and another beer. And some pretzels.