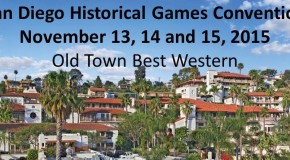 By Kevin Clasing on BGG and CSW I played my first game of Stonewall’s Sword this past weekend, and had to comment about an amusing aspect of the game.Our first turn must have taken

By Fred Manzo Well it’s finally time to head off to the Lancaster Host hotel. This is the final year that the World Boardgaming Championships (WBC) will be held in Lancaster, so the guys