A Beginner’s Guide to “Star Realms”

One of the more popular niches in Space Opera gaming is the “4X model,” in which players compete in eXploring, eXpanding, eXploiting and eXterminating each other’s empire. “Star Realms” however, is a fast-paced, multi-player, deck-building game that can more accurately be described as a “2X” game, in that players expand their empire and exterminate their opponent’s, but don’t particularly explore or exploit their corner of space.

Basically, our group found “Star Realms” to be perfect for those times 3 or 4 gamers are looking for a quick, fun experience. It does not come with a board, as the cards create your fleet and bases. There are four main types of cards, authority (which measure the health or morale of your empire), generic ships, faction specific ships, and faction bases or outposts.

Each player starts out with a deck of 10 cards, which is made up of 8 Scout ships and 2 Viper fighters, and with a starting hand size of 5 cards. When it is a player’s turn he may use the credits generated by any of the cards in his hand to buy a new ship or base from the tableau. 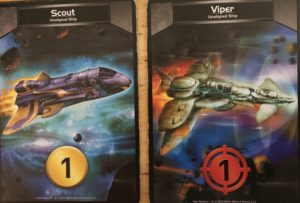 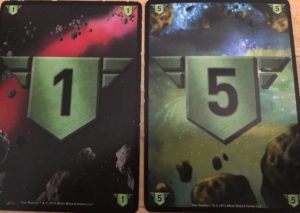 The front and reverse side of the same card. These measure the morale of an empire (also known as its authority). 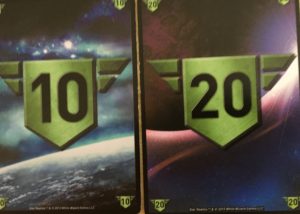 The front and reverse side of the same card. Players usually start with a set number of “authority,” say 50, and when their empire hits zero “authority” they are out of the game.

Once a game commences a player attacks and builds his empire (deck) during his turn. Some of the faction cards available to a budding empire builder specialize in culling a deck, some in building authority, some in buying new ships and bases, some in drawing more cards in a turn and some in combat. As the secret to success in this game is to unlock as many bonus sections on the cards he plays as possible players tend to concentrate on two factions as playing multiple cards from the same faction in a turn allows a player to unlock the bonus sections mentioned on those cards. (In effect, expanding the number of cards played per turn)

While concentrating on only one faction might seem an optimum strategy, the tableau both gives and withholds. That is, by concentrating on one faction a player will start to waste an excessive amount of his trade each turn as his preferred faction may not be available to buy or more probably may not appear with sufficient value to match the credits he generated. As you must use or lose all the credits you generate each turn sometimes players are forced to buy a faction ship or base that is not as helpful as he might wish, in that it may never be able to unlock a bonus section. 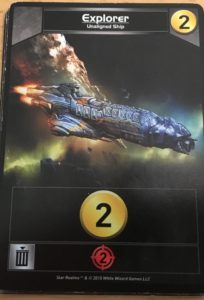 Besides the cards in the tableau players may always buy a generic “Explorer” ship which generates 2 “trade” (credits) when activated in a turn. Note that while Scouts, Vipers, and Explorers are available to each empire, their downside is that as they have no faction symbol they do not activate the bonus feature on any faction card. And unlocking the maximum number of bonus sections is the key to victory in this game.

A tableau is a marketplace where a player may buy new ships and/or bases for his empire. The size of the tableau depends on the number of players. 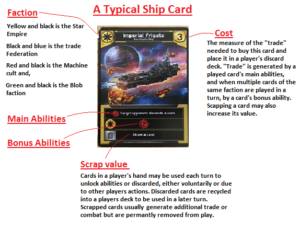 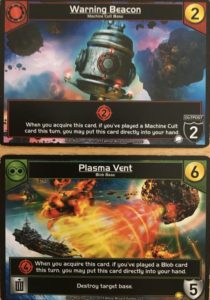 Bases come in two varieties: your ordinary base and your Outpost. Both stay in play producing items from turn to turn until they are destroyed by an opponent.  Bases and Outpost cards appear horizontally and have the word “base” on the second line directly beneath the card’s title. In addition, the word “Outpost” appears above the defensive strength in their lower right-hand corner. When attacking, an opponent’s “outposts” must be attacked first.  This makes Outposts the most valuable type of card as they both increase an empire’s output each turn they are in existence and they protect its authority from attack.

There are also 4 factions in the basic game: The Machine Cult, the Blobs, the Trade Federation and the Star Empire. Each specializes in a different ability and each player may have any combination of factions in his deck.

For example, the Machine Cult is good at attacking and scrapping low-value cards from your deck, the Trade Federation does a little bit of everything, including increases an empire’s authority, the Star Empire mostly builds but does fight and the Blobs mostly fight and draws extra cards. So depending on a player’s strategy he should start off concentrating on the two factions that play to his strength, and hope to unlock as many of their bonus sections as possible.

The game may be played with two to four players and uses a number of variants. The one we prefer is the one where players may only attack the player to his left or the outposts (and then the bases) of the player to his right. This variant prevents players from ganging up on a leader while allowing some flexibility in targeting.

“Star Realms” comes in a basic game, with booster packs. A major expansion will be released shortly that allows a second level of bonus sections to be unlocked on some cards. “Star Realms” usually takes about an hour or so to complete.

Note: The articles in the “Beginner’s Guide” series are not meant to replace the necessity of reading a game’s rules, but to give prospective players a feel for the game. It is my hope that after reading one of these article players will have enough information to decide if it’s the kind of game they’d like to pursue further.