A Grimm Tale of the Global War on Terror (GWOT) – of GMT’s Board Game Labyrinth: The War on Terror 2001 – ? – A Boardgaming Way Analysis 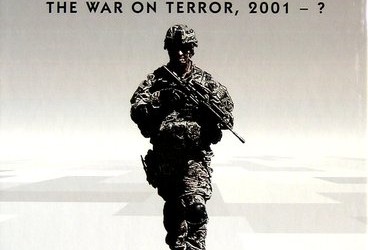 Labyrinth: The War on Terror board

As Harvey Mossman has already produced a fine review of GMT’s Labyrinth: The War on Terror for The Boardgaming Life AND used up all the good classical allusions to strings, mazes and labyrinths, all that is left for me to do is deal with a few last breadcrumbs. 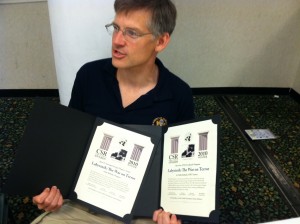 Designer Volko Ruhnke, accepting both the 2010 Charles S. Roberts Award for Excellence in Wargame Design for the best post-World War II wargame and the James F. Dunnigan Design Elegance Award for his Labyrinth: The War on Terror, 2001 – ?.

First off, after three plays and a couple of group discussions, I’d agree that this is a strong and well thought out treatment of the War on Terror. It really does give you the feel of waging an anti-terrorist campaign (in a highly abstract way, of course), although, in my opinion, it has weak points. So you’ll just have to judge for yourself how important they are before buying the game.

Breadcrumb # 1: Card Design.
In a Card Driven Game (CDG), card design is an art in itself and I’ve only seen it done right once (in Hannibal: Rome vs. Carthage). In this instance it seems that too large a segment of a new player’s time is spent arguing over what exactly each event means. (Was it really necessary to give players the impression that GMT was running short of verbs?) Apparently, the push for a compact and efficient simulation came at the expense of easily understandable components.

Breadcrumb # 2: Events.
As for the actual events themselves, well, the take in our group was that players put in a lot of effort, perhaps too much effort, seeing that they don’t trigger their opponent’s events AND paradoxically they succeed! That is, between events having numerous pre-conditions and the fact that one event can be buried each turn and that players can manipulate their first few cards in a turn in such a manner that the enemy events they hold become inoperative, most such events end up never being triggered. It just seems to me that it is more satisfying to spend time making something happen, as in Hannibal, than to spend time making nothing happen. Plus, it would produce a quicker game, create visible consequences and keep both players involved in important game decisions. In fact, I’d be interested in playing a game of Labyrinth using the Hannibal system itself. Yes, the system as it now stands produces grim choices for a player, but its cost – in games terms – is high.

Now it’s been said that “You shouldn’t think of victory in this game as one side crushes the other or one side gives up. This is a long struggle and neither side is going to give up. The victory conditions are couched in a time frame of the next few years and the side that best achieves its objectives will ‘win’ by having an advantage going in the long haul. On the other hand, if one side isn’t ready to give up in what sense has he lost? All situations have advantages and disadvantages, but winning implies having a position so decisive that your opponent refuses to go on. And that’s not going to happen in this state of affairs, no matter what the point total is.

The Gingerbread House
So, in the end we have a detailed, but playable, take on a modern conflict. Although its clock-work approach combined with a substantial dose of randomness will not be to everyone’s taste, I’d say that most fans of Hannibal: Rome vs Carthage and Twilight Struggle who put in enough time and effort will find this game a delicious morsel.