DuBarail’s horse artillery missed again, but his light cavalry charged recklessly, avoiding Defensive Fire, and cut down many Prussian Guard horse artillery gunners, forcing the remainder back onto their own cavalry (D2*).

The Guard (purple) activated and Shook the French cavalrymen with some close-range fire from a much-diminished horse artillery battery. A French Battlefield Conditions chit prevented them from suffering further harm from a Krupp’s Guns chit. The Guard cavalry then assaulted, rolled a 1 and promptly retreated off the map (counting as Broken so they wouldn’t be seen again, not without an HQ to rebuild them), leaving only the surprised gunners to defend the road.

Rheinbaben’s 5th Cavalry Division (white), seeing the guardsmen in peril, rode to the rescue, assaulting DuBarail’s horse artillery (they couldn’t reach the cavalry unit). Forton’s cadre-strength medium cavalry Opportunity Charged the Prussians but were wiped out for their trouble. The Prussian light cavalry then forced DuBarail’s gunners back, cutting down many of them (D2*).

Wilhelm’s 6th Cavalry Division (dark green) reached Puxieux on their ride to the Verdun Road, still a long way to ride to get there and thus unlikely to reach their goal as darkness gathered (barring use of a CIC chit anyway). 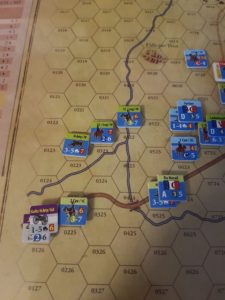 DuBarail’s Chasseurs (light green) crash into the Prussian Guard horse artillery (purple), hurling them back! Forton’s few remaining Dragoons and Cuirassiers (light blue) are too far away to interfere. Ladmirault’s IV Corps Hussars and Dragoons (green) are waiting for orders to advance, but no such orders appear to be coming…

Flavigny
Frossard’s artillery (khaki) failed to damage Stulpnagel in Flavigny and then he failed in rebuilding any of his shattered units, being thus of little help to the Imperial Guard’s impending attack.

Manstein’s small IX Corps (orange) shook up Frossard’s Corps artillery, then assaulted it, the larger brigade flanking it by coming right up next to Flavigny (I decided to make the smaller battleworn unit the leading hex, as it wouldn’t then have to assault up-slope). The assault turned into a Tough Fight, reducing the Corps Artillery and forcing the Prussian attackers back (the battleworn brigade passed the Break Test and only had to retreat one hex). An Auftragstaktik chit later saw the retreated brigade return and finish the job, breaking the French artillery, ending up right next to an Imperial Guard stack.

With the larger brigade right next to Flavigny, any Auftragstaktik or Prussian CIC chit would be enough to relieve the town if any of the defenders abandoned it (due to being Broken or suffering the effects of Prussian Aggressive Tactics or FOW Wayward Prussian Unit during the last turn).

Goeben’s lone brigade from VIII Corps (brown) assaulted some II Corps light cavalry screening the Guard’s left flank. The cavalry stood their ground and was roughly handled (disrupted and reduced), but at least Goeben wouldn’t get to mess with the Guard’s flank before the attack on Flavigny.

Canrobert’s VI Corps (yellow) fired at Flavigny to no effect, then redeployed for an assault at dusk (9 pm) with three brigades, all but one fully rallied (one SP 6, one SP 5 and one Shaken SP 4 brigade).

The FOW Event chit turned up quite late, with disastrous results for the Prussians! Stulpnagel’s infantry brigade in Flavigny, as a result, was blasted to pieces by Chassepot rifles and French cannon using point-blank plunging fire down on the poor Prussians in the stream into which they stumbled. And just like that, Flavigny was populated only by some very nervous gunners! (I didn’t even bother to sacrifice a Prussian Inspirational Leadership chit on the poor infantry; there was no way they could have survived all that plus further fire when the Imperial Guard activated.) 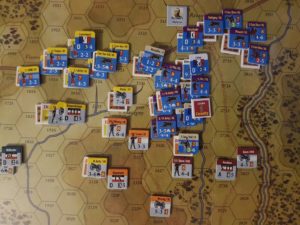 Flavigny in peril! Another of Alvensleben’s brigades has just marched to its doom, the victim of a Wayward Prussian Unit FOW Event, leaving Flavigny in the hands of unsupported artillery (yellow), but Manstein’s IX Corps (orange) is close, having just destroyed Frossard’s Corps Artillery (khaki). To the north, three fresh brigades from Canrobert’s hard-fighting VI Corps (yellow) are preparing to attack Flavigny should the Guard fail…

The next-to-last formation to activate (Alvensleben’s III Corps being the last), the Imperial Guard Corps under Bourbaki easily passed their roll on the Bazaine’s Leadership track, activating despite the Bazaine’s Malaise chit placed on them earlier. 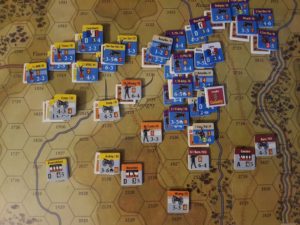 Alvensleben, ever calm, did the best he could with his III Corps (yellow). Noting that Tronville was not under threat he recalled the two battleworn brigades and cavalry from there, planning to create a diversion on Canrobert’s flank (yellow) during dusk, possibly distracting him from any attack on Flavigny. His Corps Artillery and rifle fire from the Hasty Works west of Flavigny broke one of Canrobert’s brigades. Seeing that the Imperial Guard was not advancing he rallied and sent back Stulpnagel’s divisional artillery to Flavigny. Not bad work at all! 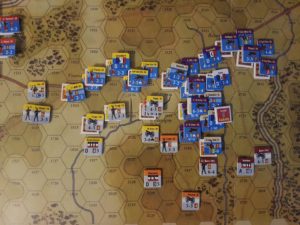 Alvensleben (yellow) has rallied his frightened gunners and put them back into the Flavigny earthworks, battered Canrobert’s VI Corps infantry and sent some of his own infantry to bother Canrobert some more on his western flank. 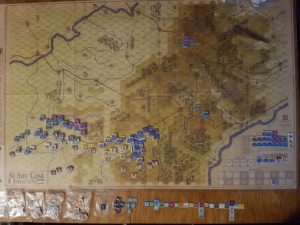 A view of the battlefield at the end of the 8 pm turn. Both Ladmirault (green), Canrobert (yellow) and the Imperial Guard (purple) still have enough fresh infantry to win the day if given the chance, and only a single unit of Prussian Guard cavalry stand on the Verdun Road exit hex! Dusk is next…

To summarize the Dusk Turn rules – 1) LOS is reduced to one hex, meaning fire can be only conducted at adjacent units; 2) movement costs one MP extra per hex except along roads; 3) TCRs are reduced by 1.

As the last turn begins Tronville and Puxieux look to be safe in Prussian hands, Flavigny reasonably so, but the western hex of Mars-la-Tour is clearly threatened. A lot depends on the chit draws now; if X Corps can rally and reinforce the threatened hex in time the French will have a hard time taking it. As always, an untimely Prussian Aggressive Tactics followed by an equally timely French activation could easily decide the day, whether at Mars-la-Tour or Flavigny. And it’s anyone’s guess how the situation at the Verdun Road will resolve…

And again, no French CIC chit this turn either and Planned Events remain Prussian Aggressive Tactics and Bazaine’s Malaise.

Mars-la-Tour Holds
Ladmirault’s IV Corps (green) promptly failed a roll against the Bazaine’s Malaise chit (two chits on the track) and thus Mars-la-Tour was safe as LeBoeuf’s III Corps (red) would be unable to threaten Prussian possession of the town!

When LeBoeuf activated there was literally nothing he could do; the only units that could even reach any Prussians were disrupted to uselessness. In the end, he simply withdrew the one brigade in contact and rallied it.

Voigts-Rhetz’s X Corps (green) had nothing to shoot at and simply rallied the defenders of the western town hex. 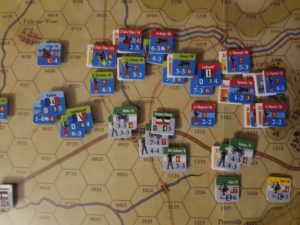 Mars-la-Tour held the whole way! The French IV Corps (green) sledge-hammer never came and LeBoeuf’s III Corps (red) was too shattered to accomplish anything! The field was littered with French dead and shattered gun carriages, fallen mostly to the deadly Krupp guns…

Flavigny Holds
Frossard’s II Corps (khaki) was unable to do anything in the darkness, neither capable of shooting or moving fast enough to reach anything worthwhile.

The French Imperial Guard never stood a chance… a Command Initiative chit was waiting to spoil their attack but didn’t even have to be used because of a Degrade Next Chit FOW Event. And so the glorious Imperial Guard watched the sun settle behind Flavigny without ever getting to test their mettle against its wall. Their shame was only slightly lessened by their seeing the nosy Hessian brigade on their left flank off with effective artillery and rifle fire.

Alvensleben (yellow) assaulted and broke one of Canrobert’s brigades (yellow) on the road to Vionville, advancing right up to the outskirts of the town. 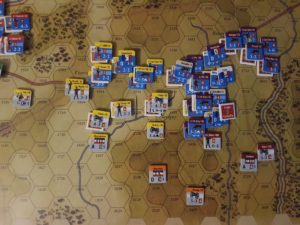 Flavigny also held until dark! Neither Canrobert (yellow) nor Bourbaki (purple) could summon up the determination for an assault in the gathering darkness against unsuppressed defenders.