To Be The Quick, Or Be The Dead, That Is The Question (8 pm)
What a turn! The French are knocking on the doors of Tronville, Puxieux, and Mars-la-Tour, while Kraatz-Koschlau’s X Corps division has pushed through three divisions’ worth of French cavalry (1C, 3C, and the III Corps cavalry) to reach Jarny!

I’m not even going to try to analyze the situation! Anything can happen! Will Bazaine’s Malaise and Prussian Aggressive Tactics have an effect? Who will activate first and strike the first blows?
The last hour of daylight…

Jarny
Forton’s 3rd Reserve Cavalry Division (light blue) could contribute little, being either too weak or with its LOS blocked, and so did nothing this turn.

The French CIC chit appeared and I chose to activate Nayral’s division from LeBoeuf’s III Corps (red), taking the 40th brigade under fire from three directions (the Shaken 2-2 1st brigade, the Shaken 4-3 2nd brigade and the 2-3 divisional artillery with mitrailleuses), Disrupting it with some lucky low-odds rolls.

Du Barail’s horse artillery (light green) managed to Shake the 39th brigade. The infantry brigades the Prussians relied on to carry Jarny were now in a sorry shape…

The nail in the Prussian coffin then seemed well and truly hammered in as LeBoeuf’s III Corps (red) activated before either the X Corps (green) Activation Chit or the Prussian CIC chit was drawn, and no Bazaine’s Malaise in sight…

Operating in Defensive Posture with a Feu de Batallion chit helping out, French fire was accurate and deadly. The brave but already disrupted 40th brigade was the first casualty reduced, then Broken and scattered. Its brother brigade, the 39th, survived without further damage. The OOC Prussian Guard cavalry near Ville-sur-Yron was also finally Broken. (Its horse artillery did nothing, and would have withdrawn if the French had been closer, due to a Withdraw! OOC chit.)

LeBoeuf ended his activation rallying his Shaken infantry and Corps Artillery in Jarny.

Rubbing salt into the Prussian wounds, the very next chit drawn from the cup was one that could have resulted in a very different outcome; the Prussian CIC chit. If Kraatz-Koschlau’s division could have fired and assaulted first this disastrous turn of events might possibly have been avoided.

I could hear the screams of Prussian frustration when the next chit, in turn, was the Bazaine’s Malaise chit! Among the next few chits were no less than two Inspirational Leadership chits, which could have saved the 40th from the French fire before the brigade became Battleworn and Broken! Oh, cruel fate!

Rheinbaben’s 5th Cavalry Division (white) could do little but try to exact some revenge, finishing off Du Barail’s stubborn horse artillery, allowing the cuirassiers to push on until they were right next to the reduced French brigade (Nayral’s 1st) protecting Jarny’s north-western flank.

The last word at Jarny, however, had not yet been spoken. Voigts-Rhetz’s activation of X Corps (green) was in Defensive Posture due to a French Command Initiative chit, but Prussian rifle and artillery fire saw more Morale Hits piled on the French, Nayral’s 1st brigade ending up Disrupted. The Prussian 39th brigade withdrew slightly to rally and the divisional artillery replenished its ammunition chests and moved to a better position from which to take Jarny under fire. The Prussian CIC chit then again saw Kraatz-Koschlau’s division (now down to a single brigade with supporting artillery) activated. The divisional artillery now rallied and with plenty of shells available, Disrupted Jarny’s defenders. Rather than take the town on in a frontal attack (and exposing itself to Defensive Fire from still deadly Chassepots and Corps Artillery) the 39th instead assaulted Nayral’s battered 1st brigade, easily seeing it off (retreated to behind Jarny) and then advancing to the outskirts of Jarny (Breakthrough Movement, avoiding Defensive Fire). All was set for a daring night attack during the Dusk Turn… if the Prussians got to activate before the French the chance of a successful assault against the town would be much improved! 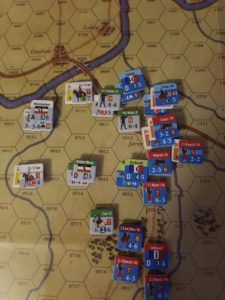 With the loss of the brave 40th brigade, it’s now up to the 39th and 37th to show the French how close quarters combat is done! The French defenders in Jarny are looking decidedly weary, having just suffered the attention of the deadly Krupp guns and equally deadly X Corps skirmishers.

Mars-la-Tour
The Prussian Aggressive Tactics chit appeared early, with only a single chit on the Prussian Aggressiveness track. Schwartzkoppen’s 38th brigade in Mars-la-Tour went charging out, into Defensive Fire from three French brigades (admittedly one had a Low Ammo marker), getting disrupted and reduced even before it attempted to assault. At least it survived that and retreated back into the town, a shadow of its former self.

Canrobert was caught hesitating, not wanting to throw his brigades into what seemed to risk becoming a perilous night attack on two fronts. The Bazaine’s Malaise chit finally took effect! So there was to be no final VI Corps (yellow) French assault on either Mars-la-Tour or Tronville. (Even had the roll passed I had a Prussian Command Initiative chit ready to spoil Canrobert’s evening.)

But the shenanigans of the 38th brigade weren’t over yet! An Advance! OOC chit saw to that. I still had an Inspirational Leadership chit available and quickly used it to make sure the battered (but overconfident) 38th would survive the charge. The artillery stacked with the 38th managed to Shake the target stack’s two French brigades and Defensive Fire was shrugged off, but the subsequent assault was quickly beaten off by the French (A2), which saw 38th back in Mars-la-Tour again, with a Shaken marker. 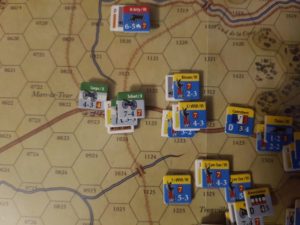 Give the commander of the Prussian 38th brigade a medal for his bravery and a padded cell for his sanity! Twice he stormed out of a perfectly good town hex, the second time while Battleworn and Disrupted! With brigadiers like these, who needs the French?

In the following assault, the 1st Voltigeur brigade got involved in a Tough Fight with the cuirassiers, decimating both units. The assault on the 12th brigade and its accompanying cavalry also turned into a Tough Fight, but this one saw the lead 1st Grenadier brigade shattered, its front ranks mowed down by Dreyse fire and the confused rear ranks disrupted by a quick countercharge by the Prussian cavalry (the French failed their TCR test while the 12th passed, the already Shaken guardsmen thus taking both a Casualty Hit and an extra Morale Hit).

The OOC Guard artillery did little (one Cautious, two Frozen), the OOC cavalry only a little more (Maneuver and Cautious, allowing the foolish Chasseurs who had charged Manstein earlier to get out of the line of fire).

The 6th Cavalry Division (dark green) subsequently suffered a Degrade Next Chit FOW Event and did nothing more this turn.

Stulpnagel’s much-abused 10th brigade (yellow) in front of Tronville was finally Broken and scattered by the heavy artillery and Chassepot fire from Frossard’s II Corps (khaki). The French infantry then assaulted the Prussian horse artillery unit behind the now shattered Hasty Works (removed once the French entered that hex) that had sheltered the 10th for so long. The already Shaken Prussian gunners found themselves decimated and reduced (D2*) but held their ground, barely.

Alvensleben’s III Corps activation (yellow) saw little in the way of effective fire (the Curse again!) but 12th brigade was able to pull out of the line and withdraw to Puxieux, rallying and preparing to defend the town better than the nervous 6th Cav horse artillery gunners already there. No other III Corps units were able to rally due to enemy proximity but an Inspirational Leadership chit was used to rally the disrupted and battleworn horse artillery in front of Tronville, ensuring they would remain an obstacle at least a little longer. 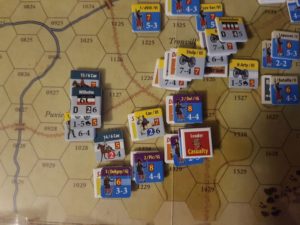 The Imperial Guard (purple) put down some effective rifle fire against the Prussian artillery but then found their match in the Prussian III Corps 12th infantry brigade (yellow) and 6th Cav cuirassiers (dark green), suffering crippling losses. The victorious 12th brigade then retired in good order to Puxieux, securing the town alongside some 6th Cav horse artillery already in place. At Tronville, Alvensleben has been squeezed into a tiny perimeter, only really holding on to the town hex itself after a battering from Frossard’s II Corps (khaki). Luckily Canrobert’s VI Corps (yellow) was the victim of the Bazaine’s Malaise chit this turn, sparing Alvensleben any further blows.

Rezonville/Flavigny
Goeben’s formation (dark brown) clambered up the heights and assaulted the II Corps Dragoons (khaki) holding the Hasty Works outside Flavigny. Both IV Corps cavalry units (green) on the flanks failed their tests to Opportunity Charge and the Dragoons declined to as it would have been an uphill charge. The ensuing assault turned into yet another Tough Fights which saw both units decimated.

Manstein’s artillery (orange) disrupted the French brigade on the road in front of it and the reduced Hessian infantry unit attempted an assault on the French cavalry guarding Flavigny’s eastern flank but was Opportunity Charged by the IV Corps Dragoons (green), the ensuing melee seeing both units Shaken (rolled a D1(A1) result).

Fire from Ladmirault’s IV Corps (green) continued to batter Manstein’s IX Corps (orange), disrupting its artillery and the Hessian infantry. An OOC unit of Hussars (light cav) attempted to assault Goeben’s reduced brigade (dark brown) but rode into a wall of lead (A2*) and fell back, reduced. Grenier’s 1st brigade abandoned Rezonville into the hands of the divisional artillery (as it seemed now no longer threatened) and marched down the road, preparing to relieve Flavigny (ended up adjacent to the town hex but not in it). 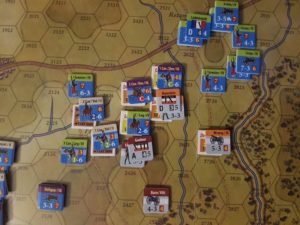 Manstein (orange) and Goeben (dark brown) smash their heads against French cavalry, receiving as much as they dished out. Flavigny now seems out of reach, especially with Grenier’s 1st brigade (green) ready to relieve the town.

A Prussian Command Initiative chit was drawn too late to be of use. The French CIC chit and Bazaine’s Malaise would appear next turn again, but the French chose an Inspirational Leadership chit as their Planned Event, hoping to use it to rally the infantry brigade in Jarny. (With the Prussian CIC chit around I didn’t think even a timely French Command Initiative chit would be enough in itself to prevent a Prussian assault on Jarny, and therefore chose Inspirational Leadership instead.) 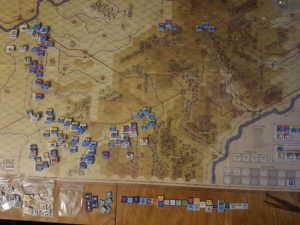 Having been a battle of maneuver, it has now turned into a slugging match. Prussian and French forces have suffered heavy casualties at Jarny, Mars-la-Tour, Puxieux, and the Gorze Road, all without a decisive breakthrough anywhere. 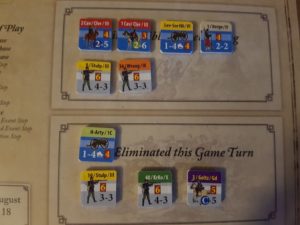 Casualties this turn were actually much heavier than this picture shows, with many more units becoming Battleworn or surviving Break Tests.