Last Saturday we ran the “It Will Cost What It Will” teaching scenario of our upcoming game “At Any Cost” through its final paces. Hermann Luttmann played the Prussians (“Don’t call them Germans.”) Bob DeMaio and Joe Gioia played the French and I kibitzed. This scenario covers the opening stages of the Metz-Verdun campaign of the Franco-Prussian War and is used to illustrate how the French got themselves into such a mess.

Basically, their problem was that there are only 2 main roads out of Metz and the French suffered from terrible road discipline. So unless you focus carefully their route march will quickly turn into a 19th century rendition of the Long Island Expressway on a Friday afternoon in the summer, complete with desperate travelers taking any service road just to create the illusion of progress.

Now it’s important to realize that “At Any Cost: Metz 1870” has many scenarios covering all aspects of the entire campaign, but whenever you discuss the Battle of Mars La Tour and the effort of the French Army of the Rhine to escape to the safety of the Verdun fortress people always wonder, “How did they get into such a position and how did they manage to lose, anyway?” After all, they had good troops, better infantry rifles, first-generation machine guns and outnumbered the Prussians for most of the battle. Well, for those interested this scenario answers some of those questions. It’s not for everyone but once you play it you will come to realize that while the French army had many advantages, hitting hard and moving fast weren’t two of them. 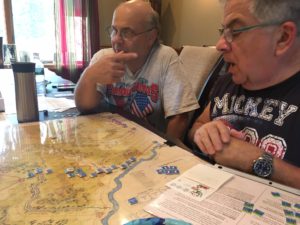 That’s Joe on the left and Bob on the right. Metz is off the board and the French army is straggling onto the southern route to Verdun 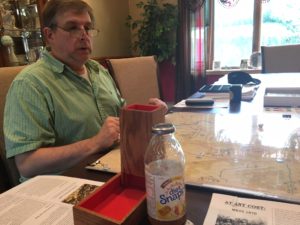 Here Hermann is surveying the powerful Prussian forces initially opposing the French. Mars La Tour is behind the Snapple bottle and that’s just about the only thing in front of the French. 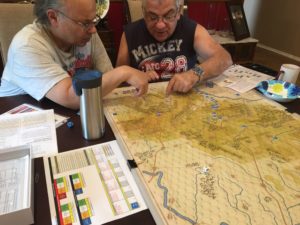 Here is the French general staff throwing up their hands at the traffic mess and having III Corp disobey orders and come on the northern route. (This happened historically, by the way). 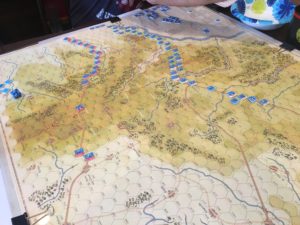 III Corp on the left is trying to beat the Prussians to Mars La Tour and control the fastest route to Verdun. But as they have to take a longer route and sometimes go cross country its a close race. Mars La Tour is off the picture to the lower right. 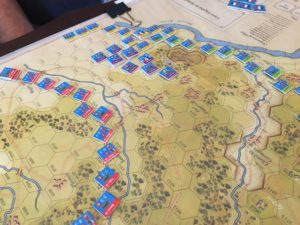 In this photo you can see that the French Imperial Guard has gotten so frustrated they’ve decided to take the service road to Mars La Tour. (They are the middle column in the picture.) As anyone who has ever driven on the BIG LIE can tell you, it won’t help. 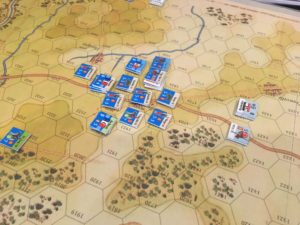 The French finally reached the Prussian cavalry screen in front of Mars La Tour in numbers. We stopped there as the situation was historically plausible and the scenario is basically a teaching tool.

“At Any Cost: Metz 1870” will be published by GMT around October of this year. It uses a variation of the “Blind Swords” chit pull system, which has already appeared in “Duel of Eagles,” “Stonewall’s Sword: The Battle of Cedar Mountain” and “Thunder in the Ozarks: The Battle of Pea Ridge.” We are now running through all the various scenarios of AAC one last time to see if any need tweaking. So far so good.

“At Any Cost” Home Page

“At Any Cost” BGG Page