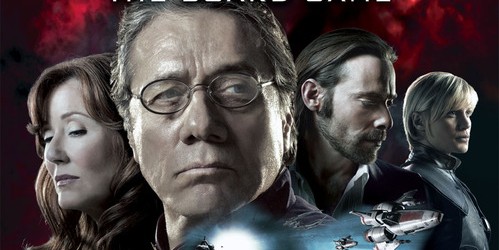 A Review of FFG’s 2008 Release of Battlestar Galactica 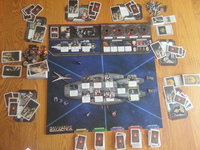 The “At Start” position of the main game board – BGG

Battlestar Galactica – The Board Game (BG) is a solid card driven co-  operative game, with good mechanics and when played with the right group of  people it’s great fun to play. At least it was the first three or four times we tried it.  We particularly liked trying to figure out who was or wasn’t the secret Cylon  deep-cover agent (or agents). In fact, this game is probably the best TV series  theme game that I’ve come across.
So what’s not to like?

Battlestar Galactica resource chart. Run out of resources and the humans lose – BGG

Well, all that being said, BG shows definite signs of being a rushed production. For example: there are 5 skill decks of about 20 cards each for the crew members to draw from, but each skill deck only has 2 different types of events. Why? Or again, the trailing Cylons can close with and board Galatica – after they’ve swept aside the defensive Viper fighter screen – but once they get there all they do is move up a generic track. Why couldn’t they have taken over different parts of the ship one department at a time? Say, somehow capture the refueling Vipers or perhaps take over the navigation department, or the life support system, or the armory or something? 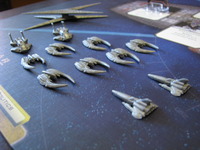 And then there is the ship–to-ship fighter combat: the defending Vipers simply roll an 8 sided die and either eliminate their Cylon counterpart or not. And once the Galactica jumps to a new planet all the small Vipers automatically follow along. Why not add some tension with the Vipers being possibly lost or damaged if they fail to return to the carrier in time? Or the rules booklet: the rules seem all to be there but trying to find them when you need them is something of a chore. Let’s just say that organizationally they need work. Or the crisis card deck: each crisis – and there are an awful lot of them – doesn’t seem particularly crisis-filled. In a 4 hour or more game (with 6 players), a typical crisis would involve the possible loss of one population, or one fuel, food or morale point. But as you start with about 10 points worth of each of the different supplies – 40+ in total – the first hour or more is not that dramatic. What’s one fuel point more or less when you think you have more than enough already? In other words, why give up obvious chances to add interesting details and tension? 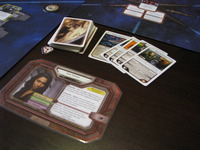 Yes, these changes would make a long game longer and I know that euro game designers consider anything that takes over 2 hours to play a chore but Battlestar Galactica – The Board Game ends after an arbitrary 8 interstellar jumps. So, it seems to me easy enough to have made it last an arbitrary 6 or even 5 jumps instead and then see to it that it’s pack with tension all along the way.

The bottom line is that Fantasy Flight Games missed a golden opportunity to publish a superb product. Its skeleton is there, but he accompanying muscles are not. Perhaps the later version, Battlestar Galactica: Pegasus Expansion (2009) made improvements, but this first effort just didn’t create enough long-term interest in my group for anyone to buy it and find out. 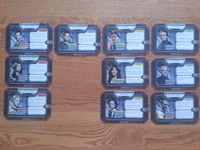