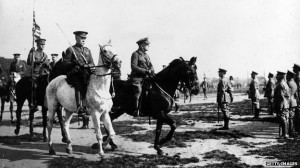 Much of what we think we know about the 1914-18 conflict is wrong, writes historian Dan Snow.

No war in history attracts more controversy and myth than World War One.

By setting it apart as uniquely awful we are blinding ourselves to the reality of not just WW1 but war in general. We are also in danger of belittling the experience of soldiers and civilians caught up in countless other appalling conflicts throughout history and the present day.

1. It was the bloodiest war in history to that point

Fifty years before WW1 broke out, southern China was torn apart by an even bloodier conflict. Conservative estimates of the dead in the 14-year Taiping rebellion start at between 20 million and 30 million. Around 17 million soldiers and civilians were killed during WW1.

Although more Britons died in WW1 than any other conflict, the bloodiest war in our history relative to population size is the Civil War, which raged in the mid-17th Century. A far higher proportion of the population of the British Isles were killed than the less than 2% who died in WW1. By contrast, around 4% of the population of England and Wales, and considerably more than that in Scotland and Ireland, are thought to have been killed in the Civil War.