“The tragedy is that, obsessed with avoiding defeat, he was blind to a beckoning victory.” – David Ascoli, author of A Day of Battle, referring to French Marshal Francois Bazaine

The Battle of Mars-la-Tour was fought on August 16th, 1870 and is considered to be one of the more remarkable battles of military history. Not only were the circumstances under which it was fought most singular, but its impact on the future of Europe was monumental. The importance of the engagement on that “day of battle” alone makes it ripe for study in the wargaming community, having had such a significant impact on the rise of the German Empire and the fall of Napoleon III’s Second French Empire. Yet, the very uniqueness and oddity of that “murderous day” make it almost impossible to simulate accurately on the game board. Such was the challenge that Fred Manzo and I decided to take on with the design of the Mars-La-Tour scenario for At Any Cost: Metz 1870. So how does At Any Cost attempt to accurately simulate such an odd and convoluted battle? Well, let me tell you …… 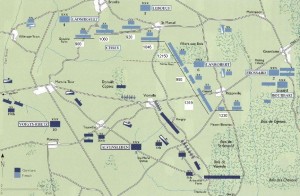 Map of the Battle of Mars la Tour – The French positions are to the top of the map, the Prussians to the bottom.