This year, some of us from the Long Island area travelled down to Lancaster in order to take part in the Cold Wars festivities.

They each draw about 2,000 to 2,500 attendees and are considered large regional conventions. The only larger ones I’m aware of being Origins and Gen-Con. Though, these larger conventions cast an awfully wide net and include any number of things not traditionally considered miniatures or boardgames. 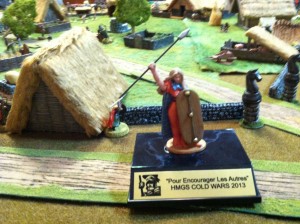 The “Pour Encourager Les Autres” award given to Raze Rohan at the 2013 Cold Wars Miniatures Convention, as can be seen, reflects the convention theme of Warrior Women throughout history

However, instead of posting the usual pictures of a bunch of guys standing around tables, I decided to concentrate on one event in particular. It was an award winner, yes. But it wasn’t all that unusual as most miniatures conventions, no matter what their official theme, cover all sorts of topics, including World War II, Civil War, Ancient, SF, fantasy (including, of course, the Lord of the Rings) and pulp fiction. Although most of these topics are obvious, the pulp fiction category might need a little explanatory help for newbies. Just imagine yourself being dropped into a 1930′s pulp serial adventure populated by all the usual suspects: Mad Scientists and their minions, Nazi Spies, Chinese Warlords, Alien Invaders, Mummies or Hard-Boiled Private Eyes and you’ll get the general idea.

But the one fantasy event I’ll concentrate on today was Brad Ireland’s “Raze Rohan,” which ran about 4 hours per session and had room for 8 players. Its rules were based on a modified Lord of the Rings rule set from Games Workshop and its figures were 28 mm in size. Its handmade landscape and buildings were uniformly excellent and were no small reason for why it won a “Pour Encourger Les Autres” award. A simple look at these pictures will show you why. 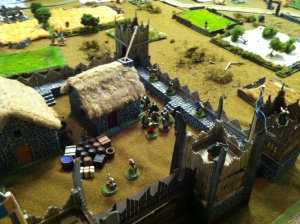 The Rohan fort viewed from above one of its corner towers. Note the supply dump located in the fort’s center

According to the convention catalogue “A band of Uruk Hai attack a Rohan village. Is the local garrison of Rohan troops strong enough to save the villagers?  Will reinforcements arrive in time? Will the Uruk Hai capture all of the villager’s supplies they are storing for winter?” 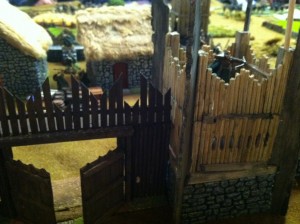 To give you an overview of the event, it was run on a 6′ by 6′ table in the main gaming hall. There was a river running down its western edge, which was crossed via a bridge located halfway up the table. A supply road ran down its eastern edge, with fields, a Rohan village and a fort located between the two. The Uruk Hai could enter the game along the southern, western or northern edge and were armed with any number of short range weapons, a few longer range crossbows and some petards. Initially, they were strong enough to be fairly certain of capturing either the Rohan village or possibly the fort but not both. Both sides were scheduled to receive reinforcements, although the exact  times of arrival were unknown. The event’s victory points centered on control of the supply dumps, the wagon train and the number of villagers killed/rescued. 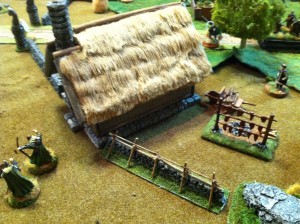 The event had been put on any number of times before we got involved and usually revolved around the Uruk Hai’s attack on the fort. Typically, they’d launched their first wave against the fort’s western wall, attempt to breach it with multiple petards and then use attritional tactics to wear down the surviving garrison. Once the fort fell. the villagers and the wagon train would find themselves surrounded and with, at least, two supply dumps captured, most of the villagers killed and the main road cut, the Uruk Hai commanders could then looked forward to a substantial, if not a strategic, victory.

In this scenario any Uruk Hai reinforcements that appeared could be brought in along the table’s northern edge in order to advance on the village from three directions or they could appear from the south in order to circle around the fort and seal off its main gate from the east. 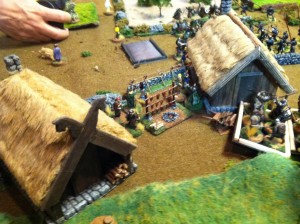 However, in our situation the Uruk Hai commanders decided to go their own way. That is, they’d go up the middle, by advancing across the table from the bridge to the supply road (after lurching towards the village). The one big advantage of this approach was that it precluded the Rohan from manning any decent defensive positions.

Therefore, the Uruk Hai’s first step was to assault the village from the west and north. When the Rohan reacted by rushing reinforcements to the village the Urak Hai would re-focus their assault towards the middle and attempt to split the defenders.

However, the Rohan commanders, in a brilliant move if I do say so myself, decided to abandon the village and its supply dump. They felt that by holding the eastern edge of the fortified village they’d control the bulk of the strategically important features on the table. Their plan centered around keeping the road open until the supply train appeared, evacuating the villagers along the road to the fort and ending the game in control of the fort and its supplies. All they had to do was fall back slowly along their northern front while shifting as many of their garrison troops as prudent from their left towards their center. In the meantime, any reinforcements they received would be feed directly into the central front until the supply train arrived. Although a fighting retreat is the hardest tactic of all pull off they felt they had a decent chance of obtaining a substantial victory. 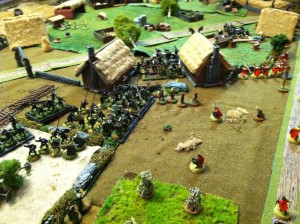 The Rohan central front. Note regulars rushing north and villagers fleeing towards the main gate – as viewed from the fort’s northern wall.

In this picture the Rohan have fallen back to their Main Line of Resistance between the village and the fort’s northern wall. Their village and its supply dump have fallen, but Rohan remain in control of its eastern walls. (The supply road to the right of the picture is still open.) Note the linear tactics the Rohan are employing. The red-caped troops to the right are regulars rushing towards the front. Villagers can be seen fleeing towards the fort’s gate along the southern edge of the picture. The Rohan village is to the north (top) and by looking carefully the captured supply dumped can be made out along the upper edge of the picture. This picture was apparently taken from the Rohan fort’s northeastern tower. 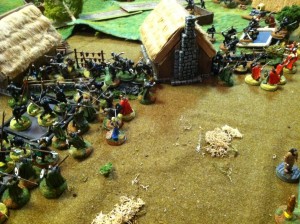 The Rohan Main Line of Resistance starts to break. The supply train is off the northern edge of this picture. Its now a race to the Main gate !

A few minutes on, the Rohan line has started to break. Note the bulge developing along the central and northern lines. However, the wagon train has been spotted on the horizon. Although, it’s still too early for the Rohan to fall back as the wagon train has only two speeds, slow and stop. 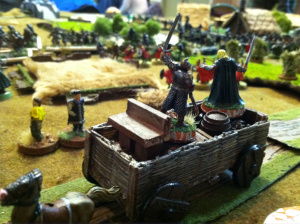 The wagon train wins the race! Note that in this picture its lost one horse to the Uruk Hai’s last minute “Hail Mary” play.

In this last picture, the wagon train is seen approaching the fort’s main gate. The Uruk Hai commanders had by this time realized they faced a Substantial Defeat. In response they gathered all their long range weapons behind their central front and let go with one last “Hail Mary” play. Note the supply wagon is down to one horse as the Uruk Hai crossbow blast hit the second one and slowed the train to a crawl.

In this last picture, the wagon train is seen approaching the fort’s main gate. The Uruk Hai commanders had by this time realized they faced a Substantial Defeat. In response they gathered all their long range weapons behind their central front and let go with one last “Hail Mary” play. Note the supply wagon is down to one horse as the Uruk Hai crossbow blast hit the second one and slowed the train to a crawl.

So the good guys were cheated out of a hard fought Substantial Victory and had to settle for a minor one. But fun was had by all.