The Economist: Financial board games – Playing the markets 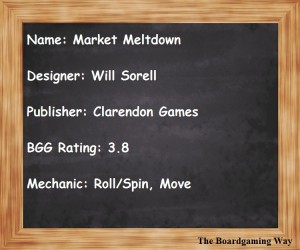 During the recent trial of Kweku Adoboli, a former trader with UBS, the prosecution described his trades that saddled the Swiss bank with a $2.3 billion loss as “unprotected, unhedged, incautious and reckless”. Sound like fun? Now there is a way to channel your inner rogue, without the seven-year prison sentence.

The makers of “Market Meltdown”, a new board game, enable rampant speculation with borrowed money to play a role in family gatherings during the upcoming holiday season. In the game, you are a trader facing severe market turmoil. As your piece (a private jet) moves around a Monopoly-style board, instead of collecting money when you pass “Go”, nervous depositors withdraw funds from your bank in sums that double with each revolution, simulating an unstoppable bank run.