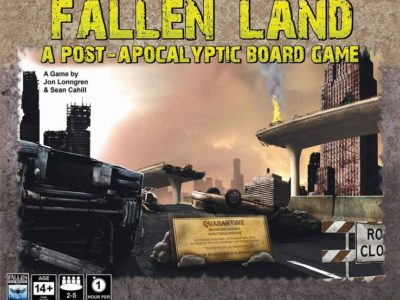 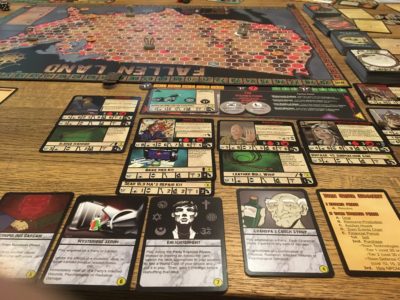 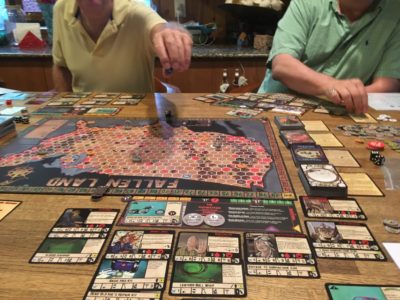 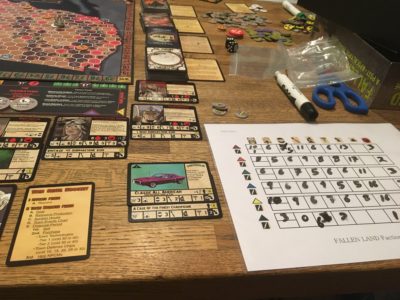 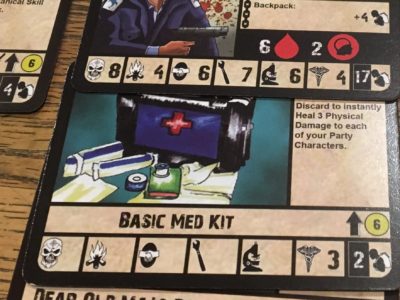 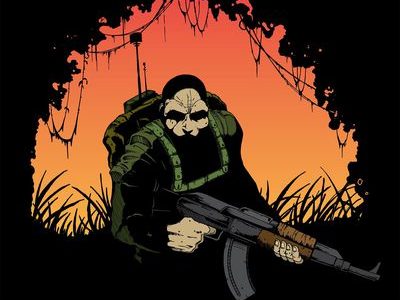 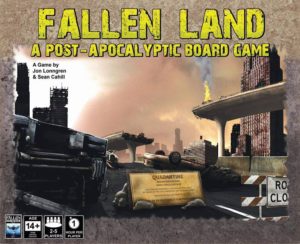 I’ve discovered a new trend, and – be warned – by the time I get around to discovering one, everyone else in the gaming world has already figured it out. Months before me. Sometimes years before me. Light years before me, if you are terraforming a new planet around some alien star long after the destruction of the Earth.

Yep, I’m talking about the wave of post-apocalyptic games that I’m seeing more and more of lately.

Fallen Land is one of those, with the action taking place in the United States after a post-nuclear war, a worldwide plague and the collapse of the stock market, followed by the collapse of civilization as we know it. (That’s the back story. You don’t really need it to play).

Fallen Land is a good candidate for that. And, it can make you crazy as well. That may be the best part. 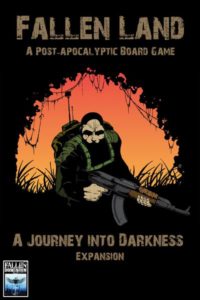 Let me explain what I mean. A lot of games are just logical – do this and that will happen. Other games have a high luck content. Like playing a Catan game and never rolling an 8, or rolling that evil 7 whenever you hold eight resource cards.

Just a couple of warnings. It’s easy to play if you follow the step-by-step player sheet sequence, but it’s neither quick or predictable. There are well over 100 possible outcomes for the events that happen every time you stop, and you will never be able to guess what challenges or skills you will need to win those skill tests. And not all those challenges are equally bad. One or two will even heal your wounds.

It is a fine game to play with several other players – more laughter all around – but there is a problem there, too. It even warns you about it on the box cover. Fallen Land is designed for two to five players, and every player you add to the game adds an hour of playing time.

Is it fun? Of course. Otherwise, I wouldn’t waste your time or mine reviewing it. Can you plan and plot to destroy the other players? Of course. 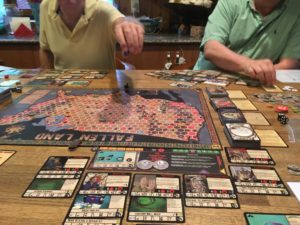 That’s John Desmond on the left and Herman Luttmann on the right. The US map in the center is for strategic movement. The cards in the lower center are mine (Fred). The large rectangular piece of cardboard surrounded by cards is the town itself. The 6 cards around it are the 5 members of its “away team” and the one member who stayed home. The card with the light blue background on the town card is my chopper, which was temporarily for sale.

I played one game with a good friend who – like me – had a whole batch of cards in their hand ready to wreak havoc and death upon anyone who attacked him. So, we killed each other. Wound after wound. Death after death. I probably shouldn’t have taken his nearby and easy-to-develop resource centers at the start of the game. Naturally, with the two of us weakened, the victory went to another player. Some things in wargaming never change.

So what makes Fallen Land stand out? Well, a lot of things. Literally. You get five characters in your active party, and there are 80 character cards dealt at random. Each character has five skills, but which ones you will need depends on which challenge you draw. And if you are lucky enough to get a vehicle from the spoils deck that gives you equipment, it counts as the sixth character in your party.

Your team faces a challenge every time they stop moving, in the plains, the mountains or the cities. The plains are easiest, and they have 60 different encounter cards. Another 80 for the cities and mountains.

You can see a lot will be going on with each move.  You can also see who is winning, since the victory points for prestige and city health are all around the edge of the board, and players can watch everyone’s markers go up or down as they roll on that town effects chart or win or lose encounters. 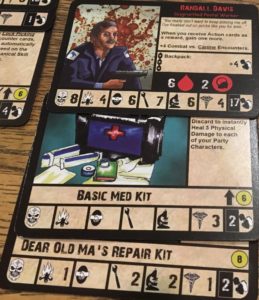 Here is one of the members of my “away team” with all the equipment he starts his trip with. The symbols across a card’s bottom row are for combat, survival, diplomacy, mechanical skill, scientific knowledge, medicine and the weight of the equipment. The black arrow indicates there is something special about the equipment mentioned on its card, the number in the yellow circle is its value, the red drop of blood is a character’s strength and the number next to the red brain symbol is the character’s mental health.

In short, this is the kind of game you begin by saying “I wonder what’s going to happen to me” instead of “Now how can I win this.” Life is tough in the Fallen Land, but opportunities are numerous.

And, if you aren’t getting the points you need for victory, you can always hope the next card you draw will let you steal them from another player.