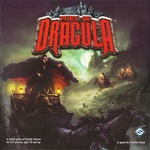 Designer: Stephen Hand and Kevin Wilson
Publisher: Fantasy Flight Games
Fury of Dracula is a great, but not perfect, 5 player game. The five players represent Dracula (of course), and four Hunters: Lord Godalming, Dr. Seward, Van Helsing, and Mina Harker. It involves hidden movement on one side and co-operative play on the other. In this game Count Dracula travels around 1890 Europe by coach (trains being déclassé) while the 4 Vampire Hunters track him down with the help of rumors, allies, fast trains, a sensationalist press, some luck (all generated by cards) and the use of their deductive abilities.

One of the game features that will make this a superior    experience  for most players is the trail mechanic the good guys  use in the hunt.  For, as the Count travels from city to city he  leaves behind calling  cards of his various visits including  hidden minions, rats, bats and  baby vampires. If the hunters  are good enough they can use the  time and location of these  encounters to figure out Dracula’s  present location. If they survive, that is. Once they stumble across the Count or his underlings, a fairly simple combat ensues, which takes into account whether it is day or night (of course) and what each side has brought along. As a hint, don’t bring a gun to a vampire fight, although pistols and rifles are useful against his weaker assistants, including the “Knife Wench” and revolting peasants. 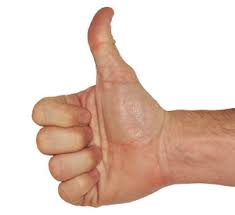 On the cuteness meter this game would be a 10, but as an old wargamer I’d    prefer that during combat the sides be a bit more asymmetrical. Perhaps, the  Count could have been given a + 1 DRM if combat occurs at Midnight and the  hunters a + 1 DRM for fights at High Noon. Or perhaps the combat system  could be a little more sophisticated. But on the other hand, this is not a war  game, this is a fun, co-operative, deduction game. In that category, it  succeeds.

However, it’s slightly unbalanced, but that’s not usually the game breaker you  would think. The game lasts a maximum of 6 “days”. This is the amount of  time that Dracula has to advance his “Vampire Track” to 6. The ways he can advance his Vampire Track include:

+2 Every time he creates a new Vampire (using an “Encounter Marker” mechanism).
+1 Every time a new day dawns (i.e. he survives another day).
+2 Every time he defeats one of the other players (Hunters).

If the game goes the distance, meaning that the Count cannot score 6 notches on the Vampire Track during that time, he’s usually toast. That’s just too much time to continue successfully evading the Hunters. The greatest chance for Dracula to achieve victory is during the first 2 or 3 days. Experienced and clever Counts prevail by using all their powers as early as possible and as often as possible. For example, he could trigger his ”Dark Call” early in the game in order to maximize his chances of generating powerful Encounters or he could use his “Wolf Form” ability every night to slip through a cordon of hunters.

But the Count’s biggest decision is in where to start a game. There are two schools of thought on this problem:

1. Take a defensive posture and start in some obscure corner of Europe (and stay out of everyone’s way for as long as possible).

2. Take an offensive posture and begin close to Mina and trail her. After all, its highly unlikely hunters will realize they are being tracked until its too late.

This last strategy is based on the fact that hunters rarely re-check a city they have already searched, so that once a hunter has been someplace its comparatively safe for the Count to go there too. Plus, Mina is the weakest hunter, as she begins the game already bitten. So if the other humans aren’t in supporting distance and it’s night, Dracula can go in for the kill. His possibilities really are endless but he has to use them all in order to survive. 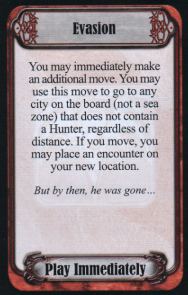 Unfortunately, what can spoil the fun for many people is the untimely appearance of the ”Evasion” card, which allows Dracula to teleport to any location on the board. Every once in a while this card will show up late in a game, just as all four Hunters have finally cornered the Count. Once he vanishes, the frustrated Hunters are dead. They have no idea where he is, time is running out and even if they correctly guess where he’s got to, it will take them forever to get there.

All in all, though, this is a very entertaining game.