I’ve always felt the battles for the Golan Heights have somehow been overlooked by game designers who saw them as a footnote – certainly important, but nevertheless not really critical – to the larger overall conflict between Israel and its Arab neighbors.

In some Arab-Israeli war games, the Golan Heights represents only a few hexes on a big map or is defended by just a handful of units, while most of the action takes place on the Egyptian front. That’s because fighting there took place in a wide-open desert, where tanks and helicopters ate up the miles. In the Golan, every few meters seems to bring a new problem. 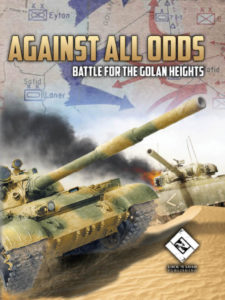 So, imagine my happy surprise when I started to lay out Against the Odds and ended up placing 20 – count em, 20 – T-55 Syrian Army tanks in a solid line on the Arab side of the map, just a few hexes from a monster anti-tank ditch. With 10 more Syrian tanks coming in on turn two, backed up by 20 T-62 tanks on turns 3 and 4.

Now there has been more than enough conflict in that part of the world since the modern state of Israel was created after the end of World War II, conflicts which were originally fueled in part by the European powers promising the same territory to both the Jews and the Arabs while that war was going on.

Not that the region needed encouragement to go to war. Antagonism there started before the birth of Christianity…just remember the story of Moses. Or, maybe, the history of some of the world’s larger religions.

The formal recognition of the state of Israel resulted in three significant battles,  in 1956, 1967 and 1973, conflicts which were very local and, at the same time, which became a proxy fight and a weapons testing lab for the United States and the Soviet Union.

The battle in the Golan covered in Against the Odds (actually just a small part of the Golan Heights, but it serves the job well) covers four days of fighting in 1973, and is vitally important for two reasons – if the Arab forces get through the defensive line, they can cut Israel nearly in half and are a stone’s throw from Jerusalem. If the Israeli forces hold the Syrians until their reinforcements build up, they can be knocking at the gates of Damascus before anyone can stop them.

Now when you put down those first 20 Syrian tanks and their supporting units, they threaten to overwhelm the 11 Israeli Centurion tanks in their pre-printed firing positions – your choice of placement is limited – and the support units for both sides (infantry, air, and a few all-important bridging units for the Syrians) will turn out to have a major role as the game develops.

But, before we get to the good stuff, the wargame reviewer’s code mandates that I bring up a couple of little points that stand in the way of you just opening the game and starting a pitched battle.

First, you can’t do it. Not until you take out the really good graphic counter sheets and paste them on sheets of cardboard (included), carefully lining up the front and back sides. I suggest making a little notch in one corner of the pre-printed counter sheets which will help them to line up properly even though you can’t see how well you are doing it.

I also suggest that you find a good old-fashioned paper cutter, the kind with a really sharp blade that will let you cut down the rows of counters neatly, top and bottom, side and other side, until they are ready for play. Same thing for the aircraft counters, the mines, the leaders and the helicopters.

The other thing is that this really neat map – and it is very well done – is actually three different sections, which generously overlap each other. So, a nice piece of plexiglass is a good thing to have. Put down the three map pieces, carefully put the plexiglass on top to hold them down, and everything will line up properly for easy play.

You can get a paper cutter from any office supply store or from any elderly aunt who used to work in a school district. Plexiglass is available at Lowe’s or Home Depot, and probably from your local hardware store.

Now that those things are out of the way, let’s open it up and see what Against The Odds can do, and how it does it. Often, it may not be the way you are used to playing.

The odds table is simple and fast to use. But, you will quickly notice that each side is treated differently in the sequence of events. Then the game stops being simple when you have to figure out the best use of your leaders and air power – not many planes and helicopters, but they can give players a critical edge – and the subtleties of direct fire, close assault and opportunity fire, which are also different for the Israeli and Syrian player and can help even the odds for the outnumbered Israelis. Until it doesn’t.

Then there are the mines that the Israeli can put down almost anywhere they want, including under enemy tanks. The use of air support requires a random roll, and there is a rule that if two units are stacked together, each one must be disrupted once before either gets two disruptions and has to take a step loss. (That’s why the markers have to line up so well. You flip a damaged tank over to its weaker side).

But of all the little quirks that make playing this game interesting, the most important one is the three AVLB anti-tank trench bridging units the Syrians use to cross the anti-tank ditch. They have very poor armor, so the Israeli players have a good chance of killing them off, at least until they are in position. They can never be moved and once deployed their armor value goes up from 4 to 40.

Each side can only stack two units in a hex, and firepower can only be combined by stacked units. Those two things get you into the game really fast, and all the other rules that create problems to one side and opportunities to the other will keep players so busy that they probably won’t have time to notice there are no rules here dealing with zones of control.

The 13-page rulebook (extra pages for the two scenarios) are easy to follow and well-illustrated. Terrain effects, combat results tables for hard and soft targets, reinforcement tables and an air support table are on separate cards.

Against the Odds somehow manages to be simple and straightforward while, at the same time, adding a lot of complexity with mortars and random roles for air support to help stir things up.

There is an optional rule that turns the first two turns of the game into night turns, cutting the Israeli attack range in half, and keeping the Syrian helicopters from bringing infantry troops in until turn three. Which side the option helps more depends on the luck and skill of both players.

You have to read the rules and the charts carefully. There are some innovations that you have to pay attention to. For instance, stacked Israeli units can always combine fire, but Syrian units need a leader in their stack to do it. Put a leader in an Israeli stack, and they shift the fire results table one column in their favor.

Or fire a Syrian sagger at an Israeli tank. It’s a powerful weapon, but they were in short supply for the Syrian army. So, you have to roll a D-6. All the odd numbers on the combat results table show “no effect.” It shows the unit has run out of ammunition.

Players on both sides can move leaders from any stack to any other stack – movement distance is unlimited. But, you have to roll a D-6 to do it. Roll a 1 or 2 and your leader has died in transit.

But enough of the innovations. Let’s get to the victory conditions, which are also a little different.

Why? Because unlike most Arab-Israeli games I have played, the Israeli player in Against the Odds is completely on the defense. They can’t win by attacking, only by stopping a breakthrough of the Syrian armor – 10 units in one scenario and 9 in the other.

And, it all happens in 10 turns. There’s a lot of punch in each of those turns, and figuring out what to do – especially with the option of Israeli passthrough fire – offers a real challenge.

Makes it worth carefully pasting those counter markers on their cardboard sheets.

Against the Odds: The Battle of the Golan Heights homepage here: