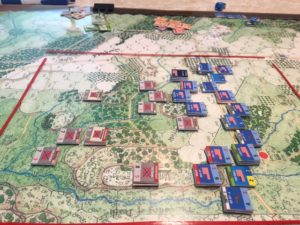 We playtested “The Whirlpool” scenario for Revolution Games “Longstreet Attacks” yesterday. Hermann Luttmann was the Confederates, Bob DeMaio was the Union and I was the chit-puller and kibitzer. In this early picture the Union is holding on the edge of the Stony Hill in the center of the picture and has already lost the Wheatfield. The Union is starting to regrouping behind the ridge the Wheatfield road runs along, in a reverse slope position. The red tape is the scenario outline. You can just see the tape running through “The Peach Orchard” in the upper center. The scenario runs from the Emmitsburg Road to slightly beyond Houck’s Ridge. (This is a playtest set.)

Here is another angle of the same position. In the campaign game the ridge line running from the lower center (Houck’s Ridge) to the upper right (near “The Peach Orchard”) makes a fine gun line. But here its being used to shield the Union troops while they await reinforcements. There are still two Union regiments on the Stony Hill, in the enter of the picture, but they are not going to be there long. “The Wheatfield” is just below and to the left of the “Stony Hill” in the center of this picture. You can also see the “Fog of War” chit in the upper center. Here its preventing a Union regiment from doing much of anything except for some weak defensive fire. 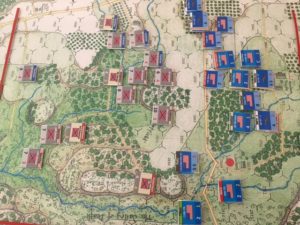 The Confederates have completely taken The Stony Hill, The Wheatfield, Devil’s Den and Houck’s Ridge at this point. Fortunately for the Union, the Irish Brigade will be coming on shortly to hold its left flank. The Union went on to recover Houck’s Ridge, in the lower center, when the game was called on account of time. By points it was a slight Confederate victory. The Stony Hill changed hands a few times and, in general it turned out to be a fairly accurate rendition of the battle. All in all we were very satisfied with the scenario. Next up will be some testing of the short “Little Round Top” scenario. We’ll be showing off “Longstreet Attacks” at Origins in mid-June and the game should be ready to be published around September or October of this year.