Weather: Cold and clear after a morning fog. Clouding over late in the afternoon as a new front of snow moved in. Fresh dusting of light snow already covered frozen ground.

Location:51°8′N 16°48′E On Google Maps search for the present day village of Lutynia in Poland, about 16 km west of Wroclaw (formerly Breslau). 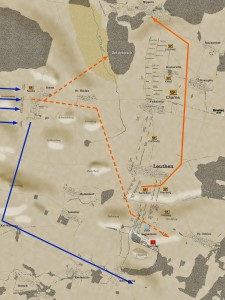 This map shows the main movements during the morning, from 08:00 to about 13:00. – Obscure Battles

Author’s Note: Here is another one of those battles which (like Blenheim) is not so obscure (at least to aficionadi of 18th century European history–my impression is that Gettysburg is obscure to most people, and many have trouble telling you how long the Seven Years War was.). However, I have a take on this otherwise well-known battle that may give some a second look–even if the event itself is not obscure to them.