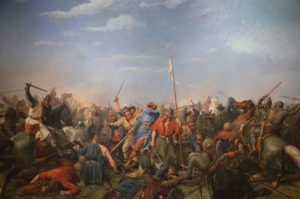 The Battle of Stamford Bridge (1870) by Peter Nicolai Arbo – Wikipedia

“Nearly everyone with a passing awareness of the History of the English Speaking Peoples knows of  the fateful year 1066, when William, Duke of Normandy (also known as “The Conqueror”, “The Bastard”, and “The Son-of-a-Bitch”–I just made up this last one), invaded England and seized the country from the lawfully elected King Harold II and the Anglo-Saxons at the Battle of Hastings. But what not everybody may know (put your hand down, Nigel, we know you do) is about an equally fateful battle fought less than three weeks before, some 250 miles north of Hastings, in which the same King Harold saved his crown and country from a Viking after the same thing.

As with my previous post on the Battle of the Granicus, much of the history of this nearly thousand-year-old, lesser battle is in dispute. A lot of it is legend or distilled from contemporary propaganda, generated by people who weren’t there but only heard. Or who had their own political axes to grind (I’m looking at you, Normans). But as with that article, I intend to apply my own obscure suppositions to how this 11th century battle might have played out. And, as usual, you’ll decipher my own ax grinding….”