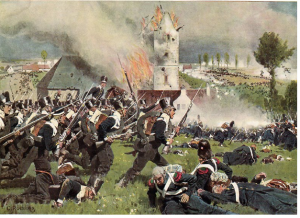 Mention the name “Waterloo” to most Americans and 60% will say it was Napoleon’s last battle, 25% will bring up a song by ABBA and the rest will have no clue. Then ask the 60% who knew about the battle the name “Plancenoit” and 98% will have no idea what you are talking about.

Plancenoit is a sleepy village about 3 kilometers southeast of Waterloo. It was where a majority of field marshal Blucher’s Prussian army arrived on the battlefield of Waterloo late on the afternoon of June 18, 1815  (which also happens to be the first battle in a series of games titled “Black Eagles Over Belgium” by Legion Wargames, with Wavre and Ligny to follow.)

Early on June 18, the main body of the French army attacked the combined Allied Army of British and Dutch-Belgium forces situated on the hills and buildings at Mont St. Jean. Throughout the morning Napoleon threw division after division against the farm house of Hougoumont on his left flank. Then between 1 PM and 3 PM the French forces launched a major attack on the Allied center. (Although, during this period there were also cavalry changes and counter-changes by the British).

At the same time, and 10 km to the east, a smaller clash was also proceeding near the town of Wavre between the French forces under Grouchy and the Prussians under Blucher. While General Grouchy had been ordered by Napoleon to keep the Prussians away from the main battlefield at Waterloo, he misunderstood his orders and only tried to engage them, without actually blocking the roads to Waterloo. Blucher on the other hand, knew his forces were needed by his ally, Wellington. He, therefore, sent General Bulow’s IV Corps marching toward Mont St. Jean at daybreak. (Though they were delayed due to poor roads). 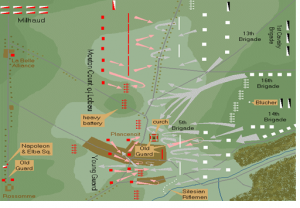 Map of the Plancenoit battlefield

Accordingly, around 4 PM, both commanding generals at Waterloo were expecting to see reinforcements arriving from the east: Napoleon was looking for Grouchy to arrive with his 35,000 man and smash Wellington’s left flank, while Wellington was hoping that Blucher would arrive with his 75,000 men to crush Napoleon’s right.

While they awaited these developments, Napoleon also ordered Lobau’s VI Corps withdrawn from the center of his line and sent it, along with Subevie’s cavalry, to his far right to protect the village of Plancenoit. (In Black Eagles Over Belgium this is simulated by the French setting up first on the hills above the town.).

Not long after the French established defensive positions protecting the roads that lead into Plancenoit, Blucher’s advance units – Losthin and Hiller – made their appearance. (In the game the Prussians arrive on turn 1 from east edge of the board.)

The lead brigade of the Prussian IV Army Corps was Losthin’s 15th, with 6,100 infantry of the 18th Infantry and 3rd and 4th Silesian Landwehr. They also had the support of Silesian Landwehr cavalry squadrons and its 6-pdr battery plus a 12-pdr foot battery from the Corps reserve. The 16th Brigade under Hiller (15th Infantry, 1st and 2nd Silesian Landwehr) also advanced on Losthin’s left.

After 45 minutes of fighting, and with the rest of Bulow’s Corps arriving to strengthen the Prussians even further, the French under Lobau were pushed back into Plancenoit,  (In the game Tippelskirch, Rjssel, Kraft and Hacke enter the board on turns 3 and 5). Simultaneously, the Prussian vanguard under Losthin also deployed skirmishers toward Fichermont on their far right.

It was at about this point in the battle that the Prussians mistook Wellington’s Nassau troops for Frenchmen, because their blue uniforms were similar to French ones. The Prussians, therefore, fired on their own allies and ejected them from their positions. Fortunately for Wellington, when Napoleon observed the pro-British Nassau troops being fired upon from the rear, he naturally assumed that his subordinate, Grouchy, had arrived to save the day.

However, shortly after 5 PM, when Napoleon was apprised of the true situation at Plancenoit he ordered General Duhesme’s Young Guard to aid Lobau in retaking the town from the Prussians. He apparently was under the assumption that the Prussian units would then be crushed between the advancing Young Guard and the men of Grouchy’s Corps, but he was wrong again.  (The Young Guard may enter the game on turn 3 or later.) Although the French still managed to clear the town of Prussians by 6:30 PM.

As Blucher had arrived on the scene by this time, he ordered the 15th brigade to pull back and regroup. But because he had come to realize how important Plancenoit was to his battle plan a new push to clear the town of Frenchmen was made by Lt General Hacke’s 13th and Major General Ryssel’s 14th Brigades. Blucher also ordered Steinmetz and Pirch’s II Corps to join in the battle. This push resulted in fierce fighting until there were only a few Frenchmen holding onto the Church and the graveyard near the edge of the town.

As a last ditched effort to protect his right flank, Napoleon then ordered the Old Guard under Fraint and Morand to retake the village. (In the game committing the Old Guard costs the French player victory points).

But it was not enough:

“Despite their great courage and stamina, the French Guards fighting in the village began to show signs of wavering. The church was already on fire with columns of red flame coming out of the windows, aisles and doors. In the village itself—still the scene of bitter house-to-house fighting—everything was burning, adding to the confusion. However, once …. the French Guards saw their flank and rear threatened, they began to withdraw. The Guard Chasseurs under General Pelet formed the rearguard. The remnants of the Guard left in a great rush, leaving large masses of artillery, equipment and ammunition wagons in the wake of their retreat. The evacuation of Plancenoit led to the loss of the position that was to be used to cover the withdrawal of the French Army to Charleroi. The Guard fell back from Plancenoit in the direction of Maison du Roi and Caillou….”

But this back-and-forth fighting lasted over 3 hours and involved more than 20,000 French and some 35,000 Prussians.(In a measure of its ferocity a number of Young Guard units suffered 90% casualties rates.)

As the sky darkened that evening in Belgium, the last few defenders of the smallholdings of the village were dying where they stood unaware that the center of Napoleon’s line had given way and their compatriots were already fleeing the battlefield.

Napoleon lost this battle in part because he sent one quarter of his troops and 90% of his reserves to hold the small town of Plancenoit when these men were needed to break the main Allied line at Waterloo. 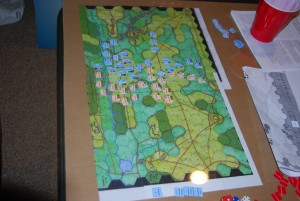 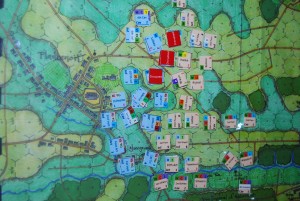 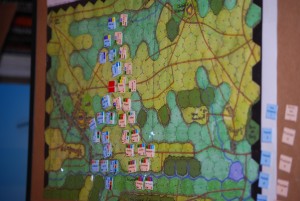