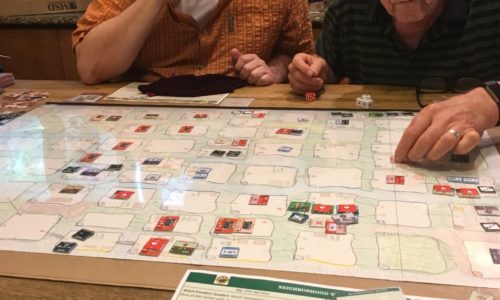 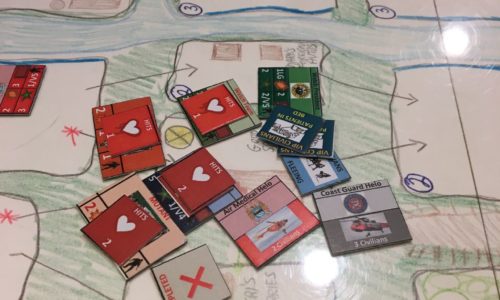 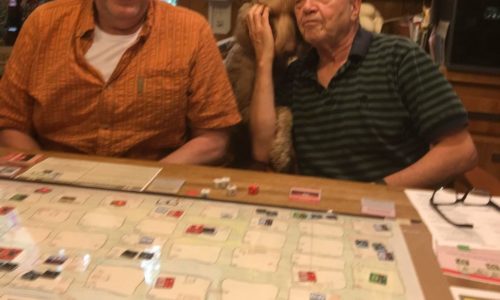 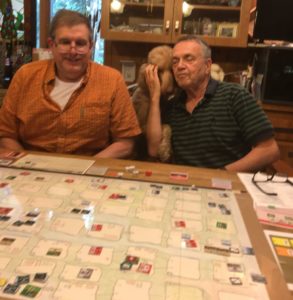 Hermann Luttmann, John Desmond, Mitch Freedman and I just spent the day playtesting Hermann’s newest game “The Plum Island Horror.” It’s in its 4th version and still in development but we are hoping to submit it to GMT sometime late this year. It is a co-operative SF game and one of about 6 we are actively working on (two American Civil War games, one Napoleonic, one World War II, and 2 other SF games). We had originally hoped “Plum Island” would make its public debut at WBC but it’s here instead.

I’m its developer, Hermann’s its designer and its too early to worry about an artist, as we’ve only been working on it since last fall. I think it still needs a bit of polish but we’re on the right track and should be ready to submit it to GMT in only a matter of months. Then, with luck, it’s on to their P500 list, and if all goes well, publication sometime in late 2020 or early 2021.

Right now, the playtest map is rough, as you can see, but the game mechanics are solid. We do have to speed play up a bit and double-check its balance but things are moving along quite nicely if I do say so myself.

Basically, “Plum Island‘ is a 1 to 4 player area-movement game on the defense and evacuation of Plum Island after a terrible toxic spill resulted in the outbreak of plague. Think of it as a cross between Hermann’s “Dead Reckoning” from Tiny Battle Publishing and “Dawn of the Zeds” from Victory Point Games, but don’t use the word “Zombies,” these aren’t “Zombies,” they are “Shades” as in Dante’s Inferno and are completely and totally different than Zombies, except where they are the same. 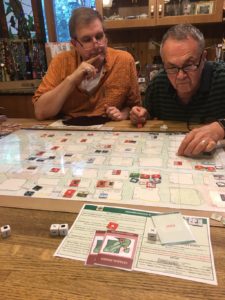 My player’s aid is the large blue sheet nearly you. My mission cards are the red ones on the lower left of the picture, my “Emergency Procedure” card is in the lower right and my “supplies” and “ammo” markers are on the far left. In this playtest I controlled “The Neighborhood Watch,” which included a band of tailgate partiers, the “Youth Scouts,” and various other neighborhood-type organizations.

In the game, each player controls a different town organization, such as “The Neighborhood Watch,” the veterans group, the Town government, and each player has his own goals and hidden Victory Point schedule. Of course, there are plenty of random events and the easiest way to score Victory Points is to evacuate civilians. Just think of it as a semi-cooperative game in that all the players may lose together or one player may win.