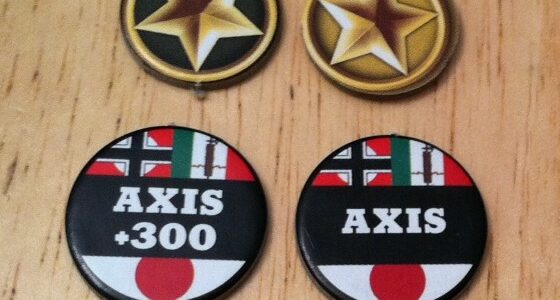 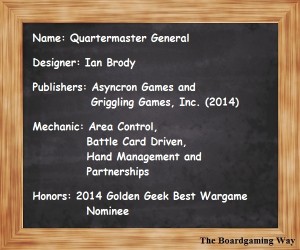 Let’s get one thing out of the way, right off: while Quartermaster General is an elegant design and a fast, fun game, it has little to do with being a quartermaster general during World War II. In fact, when I meet the designer, Ian Body at Origins the first thing he said when I mentioned I’d do one thing differently if I had been involved with the game’s design was to say “I know. My next game will be called ‘Blood and Death.’”

Quartermaster General is also one of the very few games I’ve played that runs smoother with more players than fewer.. For example, while it can hold anywhere from two to six players, trying it out with only two is a challenge as the number of hidden cards and independent hands involved actually slows down a game considerably due to paralysis by analysis.

So I’d say 6 players is optimum in this game and even with that number the game should take no more than 1 or 1 ½ hours. Imagine that, a complete World War II game in 90 minutes.

Now, obviously, this isn’t on the scale of Campaign for North Africa, but it is a rendition of World War II.

Although, if I was involved, I’d have suggested (besides a name  change) that a few of the more prominent geographical land features be included, such as the Sahara or the Himalayas. 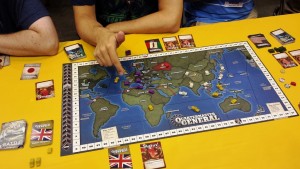 An example of the game Quartermaster General being played. – Wiki

I suppose the best short description of Quartermaster General that one could make is that it’s a “waro”. That is half Euro, half wargame. It’s a Euro in that no one is ever knocked out of a game, even if all their armies are destroyed and their Capital is captured. But it’s a wargame because it is, after all, a depiction of World War II.

Basically, in this game each country has its own deck of card. And these decks, by the way, are composed of a different number of cards for each country, so that the USA, with 40 cards, is in a much better “economic” position than Japan with only 32. This is due to the fact that each country-player must play one card, no matter whether it helps them or not each turn under the penalty of losing a Victory Point. Therefore, there is a real chance the Japanese or Italian “economy” will collapse long before the 20th turn of the game ends the war.

While a player can lose a VP by failing to play a card, he can also gain Victory Points by controlling supply centers. But as this is a team game, the alliance with the most Victory Points after 20 turns wins. So alliance members either all win or all lose in this game.

Quartermaster General is also a hand management game, and with only 8 different types of cards, it doesn’t take that long to decide what a player should do when his turn comes around. So play flies along in almost all cases. Think about it, a 6-player game, 20 turn long that ends in less then 90 minute.

Another view of Quartermaster General – Wiki

But perhaps more surprisingly, though play speeds along, the game has depth. First, as mentioned, you have to watch how fast you run through your deck so as not to run out of cards before the war ends. This is only possible because some powerful cards result in you or your enemy discarding some un-played cards from your decks. So pressing you opponent might adversely effect his “economy” and/or your own country’s war effort.

Second, you may only play one card a turn. So you are always wondering “what should I do with all these powerful long-term cards in my hand that I might not get to use? Should I dump them and get better cards? If I do, will I run out of cards? If I don’t, realistically, how many of them will I ever be able to play profitably?” (So if, say, you have a card that can eliminate an opponent’s fleet in a sea area and you opponent doesn’t presently have a navy should you dump the card? He may have a navy in the future and that card you just threw away will probably never get back into your hand as there is no re-shuffling in the game. But on the other hand, you need cards that can help you NOW.  It can be a conundrum, believe me. 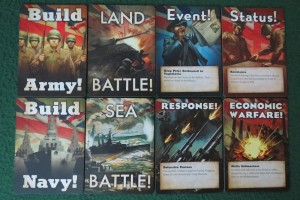 Each player deck runs from 32 to 40 cards, depending on the country involved. But there are only 8 different types of cards involved – Wiki

Here are the 8 cards types:

Build an Army: You can build an army in a space next to one of your forces. But only one army per country can be yours, so allies are important in order to defend critical positions, such as west Europe.

Land Battle: You take off one enemy army adjacent to your forces. You always win a battle. But winning doesn’t automatically give you control of an area. It simply removes an enemy army. There could have been two enemy armies controlled by two different enemy countries in the area or the area you attacked could now be empty. Empty areas are not controlled by either side, no matter where they are located.

Event: These are random events that instantly help you.

Status: These are long-term advantages that can help you throughout the game. They are placed face-up in front of you and may accumulate as the game goes one. Combinations of powerful “Status” cards can create a devastating effect late in the game. But they costs time and resources (in unplayed cards having to be discarded) to establish.

Build Navy: Builds a fleet next to one of your armies or navies. But a chain of navies also needs an adjacent land area to be under friendly control in order to be refueled. So, for example, the USA has to island hop across the Pacific.

Sea Battle: Wins a battle at sea and removes one enemy navy. Like chess, the attacker always wins. But also like chess there is more to the struggle than the results of one battle.

Response: Are cards that are played face down in front of a player and are trigger as needed.  Once again, these are powerful long-term effects that have short–term costs, in that playing a response card in one turn means you are not pressuring your opponent in that turn.

Economic Warfare: Results in your opponent losing some cards from his un-played deck. There are conditions involved with the play of these cards, but if a few of them can be directly at one of the weaker economies, such as the Japanese, they can be devastating late in the game as once Japan runs out of cards, it can’t response to attacks and the Axis loses one Victory point a player-turn.

But remember, you can only play one card in a player-turn. So do you play a long-term status card or a short term Event card? Do you attack now or hold off in order to build a powerful combination?

This is especially true of the German position. Once the Germans can combine three, four or five long-term advantages their blitzkrieg style attacks become unstoppable. But in order to generate 5 long-term advantages the German player had to forgo playing 5 short-term cards. But giving the Allies 5 turn to build their defenses without pressure from Germany places the Axis in an untenable position. What to do? And remember it’s your turn already.

So Quartermaster General is not only an elegant design but it possesses a surprising depth of play and endlessly replayabity.