Seizing the Strategic Initiative in Hannibal: Rome vs Carthage – A Boardgaming Way Analysis

Seizing the Strategic Initiative in Hannibal: Rome vs Carthage

“I seen my opportunities and I took ‘em.”

– George Washington Plunkitt, American politician and philosopher of corruption,
as quoted in Plunkitt of Tammany Hall: A Series of Very Plain Talks
on Very Practical Politics

While there are many ways to turn incremental advantages into winning positions in Hannibal: Rome vs. Carthage (HRC) some of the more dramatic occur at the end of each turn.

The End of Turn Struggle 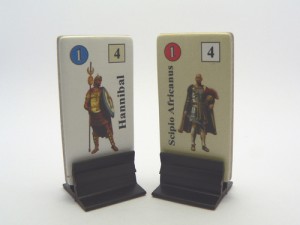 Hannibal vs Scipio in Hannibal: Rome vs. Carthage

Usually, the most important development in any game of Hannibal: Rome vs. Carthage (HRC) involves using multiple uncontested cards to create semi-permanent advantages, in a tactic that is sometimes called an end-of-turn cascade. For example, with a 3 card advantage and the right cards, Carthaginians can revolt Sicilia, gain political control of this politically important province and ship in a defensive force large enough to protect their new holdings before the Roman Republic can even react.

Although the power of such combinations is obvious to most players, just how to generate them remains something of a mystery. As far as many are concerned ending a game-turn with a few exact cards is just something that sort of happens. On the other hand, better players are aware that this advantage is the result of a struggle that proceeded throughout an entire turn. This article will focus on this struggle in an attempt to teach new players how to see their opportunities and how to take them. Now normally, most players understand that whoever allows his opponent the initiative at the beginning of a turn will be compensated by being given the potential advantage of playing the last, and uncontested, card at its end. However, there are a number of ways to enlarge, contract or even eliminate this advantage.

Basically there are 3 ways to expand it: by triggering the … and the …events and through using fewer Interrupt events than your opponent. In addition, there are two or three methods of disrupting your opponent’s own terminal strategy.

How to Create a Cascade

1. It’s simple: don’t go first. Although the Carthaginian player usually decides who plays the initial card in a turn, the Roman player may force the issue by launching a Campaign. Therefore each player has at least some chance of determining who goes first. The obvious advantage of playing last, while not that big a deal in itself (as whatever damage has been done can be undone next turn), is important because it can be viewed as the starting point to a winning position.

2. Play the Messenger Intercepted card as an event. In fact, many people would say that this is the most powerful card in the game, though some might favor that label being applied to the Syracuse Revolts card, which certainly is devastating when played during the game’s last turn.

Of course, some players complain that the use of the Messenger Intercepted card as an event is an expensive undertaking. After all, you are giving up a sure 3 OPs card and are not guaranteed to receive anything of particular value.

However, what these people fail to consider is that the Messenger Intercepted event has a decided effect on the end-of-turn struggle. Because if you think letting your opponent play a card you can’t counter is bad, letting him play three cards in a row you can’t counter is ten times worse. And this is exactly the effect that the Messenger Intercepted is capable of creating. For example, say you went first and so your opponent goes last. (We’ll use 7 card turns to save space):

A. You Go First Your Opponent Goes Second (so he expects to play the last card)

Fourth Round: You decide to play the Messenger Intercepted card and have 3 left, but you get one from your
opponent’s hand, so you end the round with 4 cards again. Then your opponent, who started with 4 cards, loses 1 card to the Messenger Intercepted event and has only 3 cards,
but must still play 1 card this round, leaving him with only 2 cards at the end of the round.

Seventh Round: You have 2 cards left to play, with no possible response this turn.
But suppose your opponent went first in order to take advantage of a tactical situation?

B. Your Opponent Goes First You Go Second (so you expect to play the last card)

Sixth Round: He plays his last card and has none left. You have 3 cards still to play. He can’t respond this turn or possibly ever, depending on what 3 cards you use.

As we see, the Messenger Intercepted card can generate a 2 card advantage, either taking 1 from your opponent and giving you 2, or giving you 3 cards to play at the end of a turn, instead of 1.

The alternate Roman and Punic dice in Hannibal: Rome vs. Carthage (Second Edition).

And remember, your opponent didn’t know you would be playing the Messenger Intercepted card until the third round. So what happens if he used an interrupt card in round 2? After all, that’s what they are for. What happens is that your end-of-turn advantage climbs to 3 or even 4 cards. Yes, that’s unusual, but no, it’s not that unusual. I’ve even seen it hit 5 cards. Granted, that was a unique experience but it is possible.

However, like most cards, when using the Messenger Intercepted it’s important to realize that it has both offensive and defensive implications. Offensively, you are building your own cascade. Defensively, you may be upsetting your opponent’s by taking one of his cards when he only has a limited number of alternatives available. Plus, you’ll be picking from only a small number of cards, so you’ll have a greater chance of obtaining something of value in itself.

3. Play the Phillip V of Macedon event when it is in your favor. Remember, although the first time this card is played it makes Carthaginian naval movement easier and results in the Roman player discarding one strategy card unused, the second time it is played as an event it forces the Carthaginian player to discard one card unused. Many players don’t realize this card has any anti-Carthaginian potential at all because the wording on the card itself does not mention any. But it is mentioned in the rule book’s card summary section.

4. Don’t play Interrupt events (unless they are absolutely, positively, necessary). Players should always judge whether the advantages these cards produce outweigh the advantages their use will produce for your opponent, as every interruption allows him to play one more card that you cannot respond too.

How to Disrupt Your Opponent’s End-of-Turn Scheme

1. Play the Truce card as an event. It’s important to realize that a Truce also has both offensive and defensive characteristics, which have to be carefully considered before initiating one or ending one. Defensively, a Truce prevents players from moving into towns they do not already control and it prevents sieges and combat actions. It also allows unimpeded Carthaginian naval movement, which presents them with an important advantage.

Offensively, it could be used to thwart enemy plans, especially near the end of a turn. Say, your opponent has won the end-of-turn struggle and is looking forward to play 3 uncontested cards. The chances are he’s planned something that requires all of these cards, or even one or two more, in order to maximize their effect. And he is waiting until you have little or no way to respond before he jumps off. You might, for example, have only 1 or 2 cards left and so normally you just won’t be able to stop his nefarious plan. Well, in this situation you might consider playing the Truce card as an event. As the Truce can only be broken by certain limited cards (those whose events do not move an army and are actually possible for you to perform), there are many situations where a truce will go on long enough for your uses. In other words, your opponent may either not have a way to break the truce this turn or more likely, the card he has that breaks the Truce is also the one he needs to trigger for its ops in order to make his plan work. In any case, you now have a decent chance of seeing his scheme go up in a puff of smoke.

2. Play the Messenger Intercepted card and, if possible, the Phillip V card defensively as explained above.

3. You could trigger either the Hanno Counsels Carthage or the Cato Counsels Rome events depending on which side you are playing, in order to prevent the movement of important armies. Trapping the Carthaginian’s reinforcements in Africa that Hannibal was counting on has been known to ruin his whole day.

Now these plans, like most plans, don’t always work. After all, to paraphrase George Pickett on the underlying cause of the Confederate defeat at Gettysburg, “I always thought the enemy had something to do with it.” But having the ability to play two, three or even four uncontested cards is a huge advantage and any strategy whose aim is to establish such a situation is by definition a good one.

The strategic initiative in the Hannibal: Rome vs Carthage board game is dependent on both the cards dealt and how they are handled. That is, by the number of campaign cards each player possesses, by the number of cards they play as interrupting events, by the number of “Revolt” cards each side receives and, in particular, by whether or not the Messenger Intercepted card will come into effect. A critical factor in judging a situation will undoubtedly be, who plays last in a turn and how many cards will he then play?

Four Player Variant for the Hannibal: Rome vs Carthage Board Game

Two Bad Generals … or, how to use Varro and Longus in the Hannibal: Rome vs. Carthage Board Game

Seizing the Tactical Initiative in Hannibal: Rome vs Carthage

Board Game Design Lab: “How to Design a Solo Game with Hermann Luttmann”

League of Gamemakers: Patients, Protections, and Boardgames – Part I