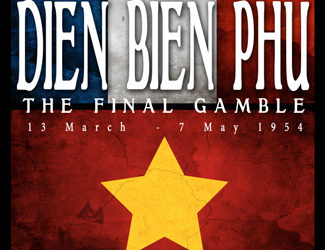 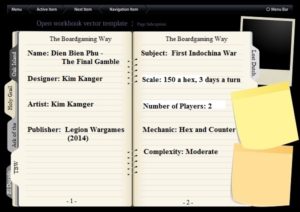 Dien Bien Phu – The Final Gamble is another great game from Legion Games (a small upcoming game company) by the designer Kim Kanger. It covers the critical battle that became the turning point of the French – Indo China War.

This game is a quick playing two player medium complexity game with four medium length scenarios and a longer campaign game. This game can easily be played solitaire due to the interactive nature of the rules where both sides must make decisions during the resolution of combat. This is a “meat-grinder” of a battle with the strategy being fairly straight forward………grind forward/hold on to victory or defeat. Its still interesting for both sides with good playability due to its variable combat results, weather, supplies, possible reinforcements and the all important morale of the opposing forces. 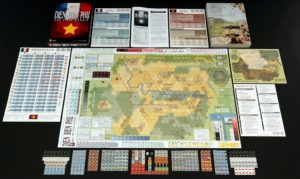 The rules are 24 pages long and are printed in black and white. with a good number of examples of play. Pages #1-6 are devoted to the map, charts, tracks and units. Pages #7-19 are the substance of the rules, pages #20-24 describe the three scenarios. On the back of the rule book is the important Sequence of Play with the rules section readily notated for quick reference into the sequence. Nice job! I would like to have had the scenarios listed by date, initial position and outcome for historical purposes. There was a short player’s notes and designer’s notes section. Personally, I would also have liked to have seen an extensive historical article, which would have allowed the players to follow along with the battle.

The map is 22 x 34 inches and is clear and pleasing to look at. The map attempts to cover a lot of territory. The map covers the operationally the strong point areas and Dien Bien Phu itself. The surrounding valley areas, several Laos holding boxes and a Hanoi holding box are also represented. A nice addition are the “trench lines” that are on the map and designate (which eliminates the need for a lot of extra counters to show) where the Viet Min (VM) trench line current position is. Each hex is 150 meters per hex and each turn represent 3 days per turn. The campaign game can be up to 21 turns or can end sooner if the French side surrenders. The map is well done with many integrated charts, tables and information and looks beautiful with the counters on it. The 4 Player Aids charts are in color, clear and nicely formatted once you fully understand them fully by reading the rules for a better explanation. 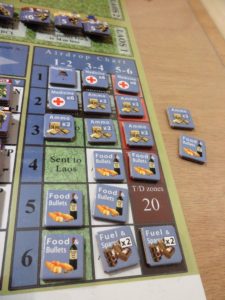 There are 352 .6 inch counters which are very well done with detailed laser printed picture icons on the counters which have morale and strength factors clearly printed, units are battalion and regimental level. The set-up of the units must be sorted out on the scenario charts (which need a detailed explanation – which can be found in the rules). The counters come shrink wrapped in the box but are easily removed from each other, with virtually no dog ears and no need to clip these counters. There is also a very nice color counter manifest in the game. These are some of the best designed counters that I have ever seen!

The Abbreviated Sequence of Play for “Dien Bien Phu” 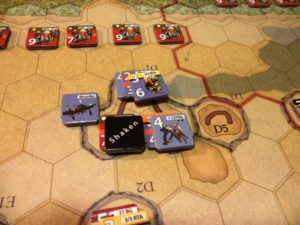 How does the game play? Well for some reason, I found it difficult for players to jump right into the game. Probably due to its somewhat unusual combat results tables, charts, map details and extensive sequence of play, the players will need to really pay close attention to the rules that explain the scenarios and the map specifics.

The game keeps your interest and is tense because  both players always have a number of options available to them. For example, due to the very interactive sequence of play both sides need to make important tactical decisions during each segment of the battle for a position. Knowing when to add barrage support, defensive fire, reinforce, retreat, or counterattack and how many supplies to use will keep both players struggling to take the strong points. Essentially both sides must decide “when to hold em….and know when to fold em….” The rules and sequence are not at all complicated, but do take some time to get used to due to the subtleties noted above. Due to the small number of units on the map and limited time, the deployment of units for both sides to take or hold the strong points is important. 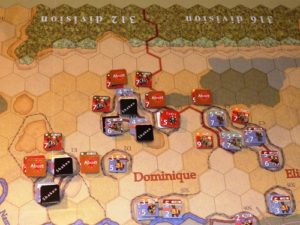 Casualties, supplies and the loss of the strong points will determine if the French will surrender or if the VM morale is irreparable shattered due to excessive casualties. The VM must balance the taking of the strong points with massed attacks and bringing additional reinforcements. However, this must be done without taking excessive time and casualties, which can damage his morale and prevent the taking of Dien Bien Phu. The French must decide the type of supplies (troops, ammo, fuel, food) to air drop and keep his morale high in order to continue defending. The French must also make critical decisions such as possibly bringing in more reinforcements by air, or a ground relief force and knowing when to counterattack to delay the Viet Minh.

There is little to no errata and Legion Wargames has one of the best laid out websites that fully supports Dien Bien Phu – The Final Gamble with a VASSAL and Cyberboard module. (I have never seen such a nicely laid out website at www.legiongames.com.) Despite some of the unusual aspects of the game, I would still highly recommend Dien Bien Phu – The Final Gamble due to its fresh approach to the battle, its re-playability and the historical accuracy of the game. Enjoy!