A Game of Thrones Board Game (First Edition) – And the question of “What is Fun?” 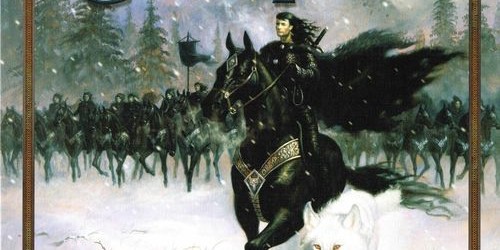 A Game of Thrones

For example, a typical Euro “multi-player solitaire” game starts with, say, 5 players and take, say, 90 minutes to complete. Without ANY interactions each player would be active only a fifth of the time. If he took say 50 percent longer to consider what he should be doing next, he’d only still be involved, say, 18 + 9 minutes or 27 minutes out of a 99 minute game. For the rest of the time he’d be little more than an observer. Sounds dull.

Now if the other players involve him in their turn by, say, attacking him, the game’s dead time shrinks. In two player games such as Go or Chess, there is, therefore, no real downtime. Either you are moving/attacking or your opponent is about to move/attack you. Perhaps that is one of the reasons Chess and Go have been around for hundreds, if not thousands, of years.

Of course, if a Euro doesn’t have any way of “attacking” an opponent and allows 5 or 6 players to move sequentially we’ve got problems. In The Game of Thrones – A Clash of Kings 6 player expansion version, for instance, while players may attack their opponents, it was decided to make it difficult to do it more than a few times an activation, which is fine in a 2 or 3 player game. But with 6 factions it causes problems.

I’d, therefore, like to throw out a number of suggests to increase this version’s interactions. 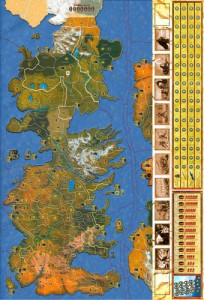 The Game of Thrones Map

First, I’d look into cutting the number of players down to three, with players controlling factions 1 and 4, 2 and 5 and 3 and 6 from north to south, if possible. That way, whoever was moving would have to take the other players into consideration at all times. This should cut the downtime to a much more reasonable level.

Perhaps it might also help if each foot unit moved one space, each knight moved two spaces and each ship moved three spaces while transporting two foot or a knight (with any units given “defend” orders” not involved). The “move” orders could then be converted into “Campaign” orders. Something like the “Move Here” orders in Strike of the Eagle only with a plus one movement allowance (I.E., foot soldiers could travel two spaces etc.)

What’s more, I’d consider having a player conduct all his movement and only later all his combat.

Furthermore, I’d seriously think about combining the three voting tracks into one grand voting track, while keeping the powers intact. This would shorten playing time. In addition, I’d have the Wildings come in fairly often, in fairly small numbers and – in order to balance the game – hitting the more powerful factions fairly frequently.

Perhaps we should also consider creating a separate reinforcement segment in order to increase the number of units on the board and so increase the likelihood of multiple simultaneous attacks occurring, which is critical with so many factions. 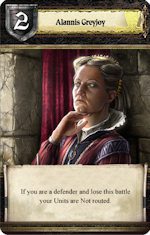 In addition, we could ask that players who placed “support” orders on an army, commit that army when giving support. This way, players would have to make tough choices on exactly who to support and when to support him. As the game now stands, one well positioned “support” army can “support” say four or five adjacent armies without bothering to pick which he deems a priority. This requires no decisions on his part, allows for no mistakes and produces no bluffing.

I’d also think about increasing the randomness of the cards in a player’s hand. Right now, everyone’s cards are public knowledge plus once a card is played its out of the game for a while. How about saying that after a battle the player gathers up all his cards and randomly discards the same number of cards he played in the battle? You’d know he has fewer cards, but which cards would be a question. As things are now everything is known to everyone, which results in battles sometime being sure thing fights.

In my opinion, the first edition – 6 player version – of The Game of Thrones has both too much randomness in the event cards and not enough randomness in a battle’s outcome.