Origins is not what it used to be. First, the registration process went smoothly. Unnaturally smooth. Eerily smooth. And second, it’s become almost exclusively a Euro fest: all Euros, all the time.

Gary Andrews reminded me that we’ve been going to Origins as a group since Philadelphia, which was way back in 1995 and some of us having been going individually since Origins was a wargaming road show in the 70’s and 80’s. But those days are gone. Origins can still be fun. But it’s not even the wargaming fun of a few years ago. It does still provide a wide gaming experience. It has role playing, miniatures, collectable card games, Live Action Role Playing (LARP), seminars, a large number of dealers and of course Euros, Euros and more Euros. But what it doesn’t have is old fashioned wargaming. In fact, if wargaming was an animal it would be on the Origins’ endangered species list. I personally did not see one hexsheet being used, although Harvey Mossman claims to have spotted one or two in a far corner of the open gaming area. Even the old “War Room,” that was run by CABS (the Columbus Area Boardgaming Society), has been folded into their “Boardroom” area.

Plus, all the bigger companies gave Origins a pass: MMP, GMT, Hasbro, Wizards of the Coast all were missing in action. In general, the dealer area was somewhat sparse and predominantly occupied by companies of the Mom and Pop variety. For example, Steve Jackson and Fantasy Flight Games didn’t have their own booths there either, although their games were being sold by a company called “Adventure Retailing”.

On the other hand, there were a few real wargame dealers. But you had to look and look hard for them. Academy Games was present, and so was Decision Games, though Crazy Igor was replaced by Chimera Games, who apparently bought out his stock. Grognard Simulations was there, as was Mark Walker of Lock ‘N Load games. But, that was about it. 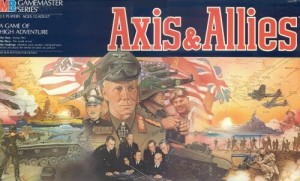 The only wargames I saw on the official schedule were a few, and I mean a few,  Axis and Allies games, some House Divided sessions, some Strike of the  Eagle and a couple Few Acres of Snow games. If you count SF games like  Twilight Imperium there were a few more. But if it was even 5 percent of the total it was a lot. And they were all listed under the “tabletop games” category on the schedule. Plus the seminars had very little that could be called history lectures, the overwhelming majority of offerings being in the realm of “How to work believable fantasy characters into your short story.”

As for the big auctions Origins was famous for, they’re gone too. This year all they had was a “silent auction” on Friday and a small live auction on Saturday. And there was nothing special about either. As far as I could tell they only  included a few old games everyone’s seen a hundred times.

In the “silent auction” portion you listed what you would pay on a sheet of paper taped to the top of the game box. This immediately caused resentment as the people who came last usually won the auction and the people who just stopped by were shut out. It was like “Live Action Role Playing E-Bay.” In fact, I understood that with 10 minutes to go, they had people walking through the auction room in one big circle. You’d walk in one door, pass by the tables once, be ushered out another door, circle back through the entrance and started walking up and down the rows again until time ran out. It seemed an awful lot of work for not very much, but some people found it worthwhile.

And attendance seemed to be down as well. Although Saturday and Sunday were more crowded then I remember. (The general theory making the rounds was that as Origins was schedule a little early this year and as not all the schools were as yet closed for the summer, there were fewer family groups in attendance – at least for the Wednesday through Friday sessions.)

Of course, Origins still had quirky titles. I did see Nun’s on the Run again and there were such offerings as Pizza Theory – I kid you not. Quoting from the official schedule “In Pizza Theory, you and your friends engage in a toppings fracas to determine whose toppings will reign supreme. Hold the anchovies!!!” And there was “Hey Waiter”. “Orders are Up! Manage your hand of cards, serve meals fast and furiously, before your fellow servers. Get your orders out before your opponents and rake in the tips!” Or how about the “Great Chili Cookoff: Players try and take tricks to capture the ingredients necessary to complete their secret recipe.” Of course, most games were not of either the wargame or the “out-of-left field” variety, being instead predominantly Euros. Things like Settlers of Catan, British Rails, Dominion or Power Grid. But still it’s a shame there wasn’t a little room at Origins for the type of game that created it in the first place.

I’m guessing that WBC is now the premier wargaming convention. 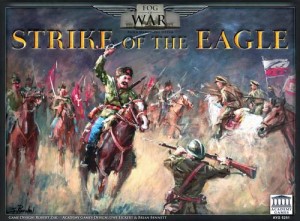 But we did have fun and that’s why we mainly go and we did meet wargame designers, such as Uwe Eickert of Strike of the Eagle, Mark Walker of World at War: Blood and Bridges and Chris Fasulo Sr. of Grognard Simulations Inc. And it doesn’t get more hex-and-counterish than Grognard Simulations. So all was not lost.

When we talked to Uwe Eickert he mentioned he wants to get out a D-Day game, a “1775 Rebellion” game and something on Gettysburg next year. It seems his new Gettysburg game was inspired by “Johnny Reb” and sounds intriguing. He’s hoping for something along the lines of a “Johnny Reb without the math.”

I also picked up a copy of a SF game: Alien Frontiers, which was designed by Tory Niemann and published by Clever Mojo Games in 2010. I’m hoping to get my Euro group to give it a try.

This year my free game from Cabs was Surf’s Up, Dude, which has a 5.29 rating on BoardGameGeek. And remember anything less than a 7.00 rating at the Geek is a sign of a game in SERIOUS trouble. So this game definitely falls into the re-gifting category. Sorry, there just won’t be time for a review of “Surf’s Up, Dude” on The Boardgaming Life any time soon. At least, not by me.

By the way, “The Boar, Bear and Toad” closed down, or was the “Bear, Toad and Frog? Or the “Toad, Bear and Frog”? I could never keep its name straight, but I can report that Yuppie Columbus is in mourning. Anyway, we had dinner at Buca de Beppo (That’s “Joe’s Basement” in Italian). It’s a trip. The décor is best described as “Over-the-Top Brooklyn” but the food is great.

We also saw a demo of a hot new “Stream Punk SF” game called Leviathan from Catalyst Game Labs. It consists of turn-of-the-century armored dirigibles fighting it out in miniature. It costs $100 and even so, it sold out fast. According to rumors the 4 dozen copies available were gone in an hour. Harvey thought about getting one but when he went back they were all gone. And, I believe, the copies being sold did not even have their stands (they’ll be available shortly). The dealer explained that they hope to get re-supplied by Gen Con.

But what did we play? Well there were miniatures, of course, and we did give various versions of Axis and Allies a try. Plus we attempted a few new gambits in 1812: The Invasion of Canada. Harvey used the “Let’s invade Canada through Detroit with a huge army” idea, twice. But that didn’t work out, as the British always saw it coming in plenty of time. The American’s losing streak in our group now extends to 0 – 10. It’s becoming of Mets-like proportions.

We did manage to go over the rules to a new game called Amateurs to Arms, which is another War of 1812 game (it’s that 200th anniversary thing). This time it was an area movement CDG version based on a period map. It looked interesting and it certainly was more detailed than “1812: The Invasion of Canada.” I think we’ll give it a stab in a few weeks. 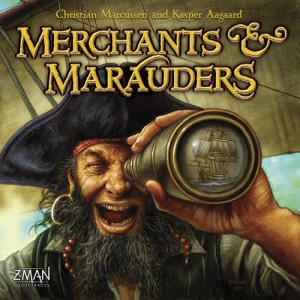 Three of us also tried out Merchants and Marauders from Z-Man Games. It’s a Euro about pirates and merchants in a 17th century Caribbean. Players start out with a small and empty ship in their home port and go from there. For example, my starting ship could have been either a slope or a flute. I picked a flute. (I wanted a clarinet but apparently one wasn’t available.) You could then upgrade to a frigate, if you were of the mind to be a pirate, or a galleon, if you wanted to go for cargo space and high profits. You then either bought and sold various items like bananas, wood, rum or spices on one island and sold them for a higher price on another or you turned pirate and preyed on various non-player merchants or even player merchants. Certainly, you could do a little of both. But once you tried your hand at piracy the various countries involved closed their ports to you and placed a bounty on your head. Plus, the more you preyed on any one country’s shipping, the more interest their warships took in tracking you down.

It seemed to be some combination of a Railroad game, as you delivered various goods to various ports, a Space game, as you could upgrade your ship with various pieces of equipment, a Quest game, as you could go on mini-adventures based on rumors generated in nearby bars for fun and profit and Junta, as there was a “Swiss” bank element used to store your loot. There were some cards, but it wasn’t a Card Driven Game, and there was some gold and, of course, a “bank.”

I can report Gary started a second career as a successful pirate. All he now needs is an eye-patch and a parrot. Harvey, on the other hand, won as a highly successful merchant and I ended up mostly being chased around the Caribbean by various pirates (hello, Gary) when I wasn’t dodging Storms at Sea.

Production values for this Euro were high and it does come with an awful lot of bits. However, the time it took to complete a single game was a long 3 hours. Now, it was the first pirate game I’ve played, but it lacked that something special. In my opinion, it was just unnecessarily drawn out. For instance, the first player to get to 10 victory points won, but so what? If we had all known the rules perhaps it would have taken us 2 hours, but really, the last hour and a half was exactly the same thing repeated 6 times. As the 10 VP goal signified nothing special, why not have a 6 Victory Point finish line? That’s something I just never understood about Euros. In an awful lot of them the first move is indistinguishable from the 10th, so why have 10 moves? But it did generate some fun and the production values were there, so I’d play it again. However, I’ll be suggesting a couple of rules changes first.

So we had an overall good time at Origins. But, in my opinion, it would have been better with hexes sprinkled around. As a result, next year, I think we may give Gen Con a try. It can’t have fewer wargames and I’ve heard everything there is three times as big.