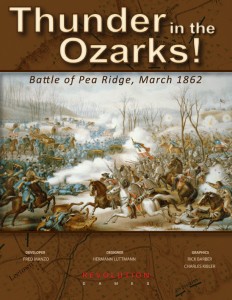 Thunder in the Ozarks: The Battle of Pea Ridge is a new game that Hermann Luttmann is designing for Revolution Games. I’m its developer and we are hoping to see it published some time early this summer. I believe it will have at least two scenarios and a campaign game and will be using the same system as Hermann’s highly successful “Stonewall’s Sword: The Battle of Cedar Mountain.”

We’ll be playtesting it next this Sunday. Here are a few photos of it the last time Hermann ran it solo. As always it’s the balance that is the hard part. The map is done, as is the OOB, but the counters are the playtest version (I believe). We’ve also completed the Random Event chits, we hope.

The map is by Rick Barber. 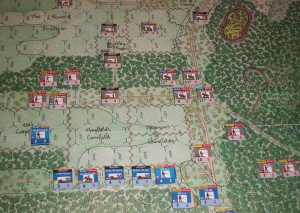 This is an example of the Leetown scenario in action. The Confederates swept the field. Now was that simply good generalship on Hermann’s part or is the game un-balanced? Only more play-testing will tell. 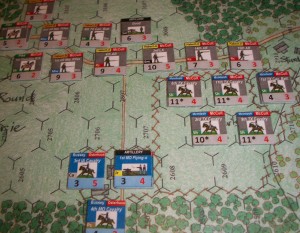 It’s always hard to balance a game where two of the top generals on one side were killed-in-action. If you allow them to live through the battle, the game is un-historical and unbalanced. If you kill them at the historically correct time, you’ve taken away some of the player’s freedom of action and you are encouraging him to take unnecessary risks with an important personage. The thought being, “Why not have him lead a suicide charge? He’s leaving at the end of this turn no matter what I do, so I may as well get the most out of him before then.”) 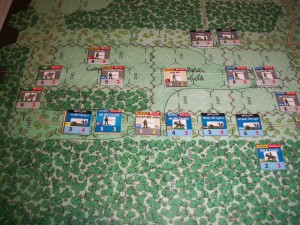 So we’ll probably have the “killed-in-action” chart heavily favored to be historically correct and see how that works out. All we can say right now is that more playtesting is needed.