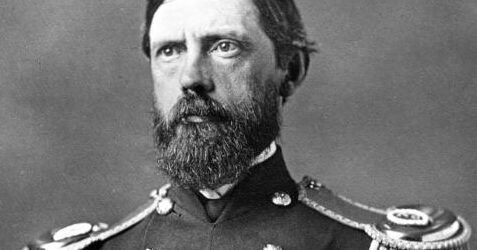 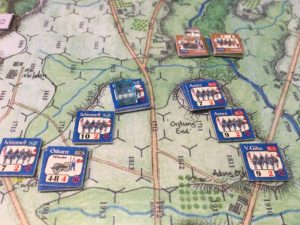 End of Turn 1 of the “Ewell be comin’ Round the Moutain” scenario for Hermann Luttmann’s “The Devil’s to Pay: the First Day at Gettysburg” using his new “Blind Swords Lite” system. This game is scheduled to be released by Origins this year.

The Union has taken both tactically important steep sloops hexes, along its first main line of resistance. The one on the right is Blooker’s (Barlow’s) Knoll. However, I didn’t place artillery on it as is traditional. (As an aside, Barlow’s father kept up a running argument for years after the war, arguing that artillery batteries had no business being positioned so close to the woods, which run up to the knoll in this map. It being 250 yards to the hex. He had a point, but sometimes the choices a commander has to make are between taking up a bad position or simply losing the battle). 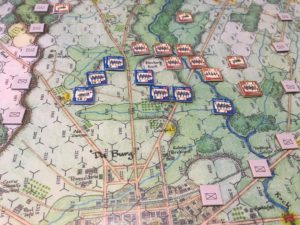 End of Turn 2 of a 4 turn scenario. There are 9 Victory Point hexes and whoever takes 5 wins the scenario. The Union, (me, of course) just lost Barlow’s Knoll (Blooker’s Knob), the first Victory Point hex to fall. It will switch sides a number of times. Note that the Confederates (Hermann) are attempting to turn my right flank. The blank chits signify the borders of this scenario. [Note: the counters are done, the maps used in this playthrough are only missing the Victory hex symbols, which will be added on shortly and the rules are being triple checked as we speak.) 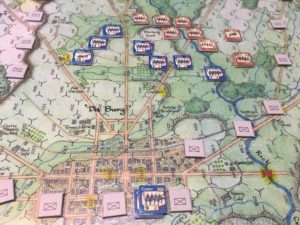 Start of turn 3 of 4, with Coster and the last of Osborne’s artillery coming on the Eastern (bottom) edge of the playing area. They are heading for my right flank as two victory hexes are located nearby: The Brickyard and the outskirts of Gettysburg.  While there is a nice steep slope nearby just waiting for some Union artillery, there are more critical hexes further west that need defending. If possible I’ll try shifting them onto the knoll later. (It never happened. Ask me for anything but time!) 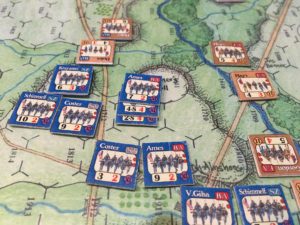 The effects of double canister at ten yards!. Osborne’s battery of rifle and smooth-bore artillery have repulsed Hays and depleted him. Not only has Hays been forced down the steep slope of Barlow’s Knoll, but across the flowing Rocky Creek! (In Rick Barbers’ maps a flowing creek run down hexsides, dry creeks run down the middle of a hex and have no effect on play. The two Osborne batteries that did the damage are under the infantry positioned on the reverse slope of Barlow’s Knoll). 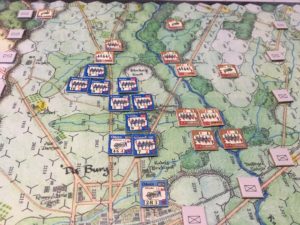 The beginning of the 4th and last turn of the scenario. The Confederates are attempting to turn my right flank (as always). Avery and Gordon are leading the charge. The XIth corps is defending, with V. Gilsa and Schimmelfemmig. Being from the XIth corps (O.O. Howard commanding), in its traditional flank guard position, and having a morale rating of 2 (out of 5) the Army of the Potomac may be living in interesting times. 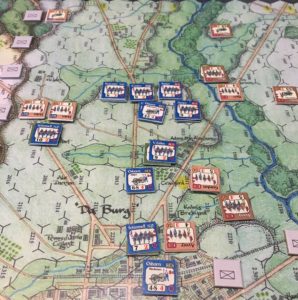 Fortunately for the Union, snipers picked off General Ewell on the last turn and his replacement is rated a “Poltroon.” This helped in the defense of “Kuhn’s Brickyard” on the Union’s extreme right flank (although it eventually did fall) and in retaking hex 1815 on the Union’s extreme left flank. In addition, Blooker’s Knob (Barlow’s Knoll) was successfully re-captured and Crawford’s farm was never taken. In fact, the Confederates were within range of taking 5 out of the 9 VP hexes before this event occurred.

The scenario ended with the Union holding all 9 Victory hexes.  Although it was a close run thing. If the scenario ran another turn, I’m sure it would have been a Confederate victory.

Hermann Luttmann’s “The Devil’s to Pay: The First Day at Gettysburg

Tiny Battle Publishing to Release “The Devil’s To Pay: The First Day at Gettysburg” by Hermann Luttmann