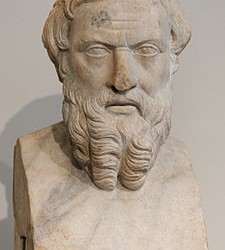 The beleaguered Samians, needing Spartan military aid, held up a bag and said ‘Bag needs flour.’ The laconic Spartans’ reply was that the word ‘bag’ was superfluous.

The struggle between East and West—between Asia and Europe—2,500 years ago was the grand theme chosen by Herodotus for his “Histories.” The climax of his story was the astonishing repulse of the Persian king Xerxes’ invasion of Greece in 480-479 B.C. and in particular the achievement of the Athenians who, “after the gods, repelled the Great King, ” as Herodotus put it.

Yet his blend of easy, witty charm and profundity, and his virtuosic gift for folding entertaining but somehow also relevant digressions into his main narrative, have always appealed to readers interested in more than mere geopolitical struggle…..

Weapons and Warfare: FOUNDATION OF THE PRAETORIAN GUARD

Cyningstan: In Search of the Lost Games