WSJ: The War That Broke a Century 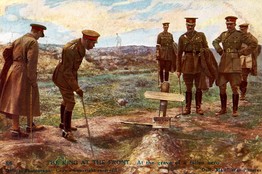 A king, a kaiser, a czar—all were undone as they realized what they had unleashed with World War I.

Next week marks the 100th anniversary of the start of World War I. It was the great disaster of the 20th century, the one that summoned or forced the disasters that would follow, from Lenin and Hitler to World War II and the Cold War. It is still, a century later, almost impossible to believe that one event, even a war, could cause such destruction, such an ending of worlds.

History still isn’t sure and can never be certain of the exact number of casualties. Christopher Clark, in “The Sleepwalkers” (2013), puts it at 20 million military and civilian deaths and 21 million wounded. The war unleashed Bolshevism, which brought communism, which in time would kill tens of millions more throughout the world. (In 1997, “The Black Book of Communism,” written by European academics, put the total number at a staggering 94 million.)

Thrones were toppled, empires undone. Western Europe lost a generation of its most educated and patriotic, its future leaders from all classes—aristocrats and tradesmen, teachers, carpenters and poets……