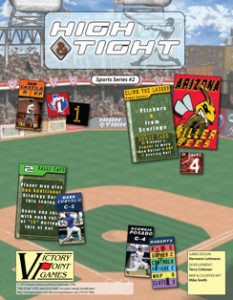 The High and Tight cover

I have always been a baseball fan. From the days of going to the Mayor’s Trophy Game with my father (the only time the Mets and Yankees played each other back then) to being at Game 7 of the 1986 World Series and through to today, baseball has been an important part of my life. I even named most of the Heroes in my recently-published Dawn of the Zeds game after former New York Mets players.

So when Terry Coleman of VPG asked me to design a game to follow his TC Tennis game for their fledgling Sports Game Line, I could not resist attempting a baseball game. I decided to try and design a game that was more accessible to the non-baseball fan, but one that still oozed the necessary baseball theme and strategy. Despite being a huge fan of Strat-O-Matic, I consciously tired to avoid doing a clone of that style of game. More to the point, my actual design influences were Avalon Hill’s Pennant Race and Slapshot games.

Why? Well, I loved the unique vision used in Pennant Race, as the player could simulate an entire game with one roll of the dice and thus complete a full season in one sitting! And with Slapshot, there was a prevalent tongue-in-cheek “fun factor” and ease of play that was missing in the other simple sports games that I had tried. So I started designing High & Tight with the idea that this game would be a card-and-dice game that wives, daughters, sons and non-baseball fans alike could play and enjoy.

But just as importantly, it still had to appeal to the dedicated hardball fan and provide a viable outlet for his hardcore baseball desires. The heart of the game became a simple statistical model that breaks a ballgame down into basic percentages. So if there’s a 10% chance to score a run in a situation, High & Tight resolves that situation withone die roll instead of the three or so rolls used in the more detailed baseball games. The central “percentage-setter” is the pitcher. Pitchers are rated by their ERA’s (called “Stuff” in the game) and this is expressed as a number of die rolls along with a target number (expressed as a Roman Number to avoid confusion). The target number is the sum that needs to be rolled on the two dice to score a run. For example, a pitcher with an ERA of 3.00 would have Stuff of “2 / VII”. This means that the pitcher will roll a pair of dice two times each inning and the batter will score a run with each roll of “7”. This will result, on average, in scoring 3 runs over the course of 9 innings (a total of 18 rolls with a 1/6th chance to score with each roll) and therefore a 3.00 ERA. Pitchers are also numerically-rated for “K”, “Control”, “Gopher”, “WHIP” and “Clutch” skills, which are utilized in certain circumstances with the Strategy Cards.

A High and Tight sample card

Ah yes, the Strategy Cards! In order to add to the feel and narrative of the game (and to cut out multiple die rolling events), the game uses Strategy Cards. Each card is titled with a baseball slang term or phrase that describes the action. The players use these cards offensively and defensively to simply increase or decrease the odds of scoring (as they will alter the pitcher’s percentage mentioned above). Each inning has its own assigned Strategy which dictates which cards can be played.

The inning Strategies are intentionally set up in the normal skill order of a typical baseball lineup – a fast leadoff hitter (1st inning is Speed), a good contact hitter second (2nd inning is On-Base Percentage), the best pure hitter third (3rd inning is None, meaning you need a good Offense rating to have a positive affect), the star “cleanup” hitter fourth (4th inning is Clutch) and your big-boppers bat fifth and sixth (both innings are Power). The next inning is the “7th inning Stretch” where you get to draw additional cards to gear up for the last third of the game. The 9th inning is, of course, a “Clutch” strategy inning as well.

You, as the manager, have to be clever deciding which player is assigned to the inning (each player can only appear once in the game) and how to play your Strategy cards. After the cards are played, a final adjusted number of die rolls are made along with a possibly new target number. Whether the number of rolls and target number are higher or lower than existed at the start is dependent on how well the managers manipulated their lineups and how well they played their cards. These final scoring die rolls are made by the batting player and each successful roll will score a run for that half of the inning.

High & Tight does take a significantly different approach to baseball simulation. Instead of the 100+ die rolls of the more traditional detailed games, the Strategy cards act as a catalyst for all those other events and instead provide a narrative of the action, concentrating on the one or two significant aspects of each player’s contribution to the game. Essentially the game takes a “mega-view” of what the ballplayer does to help his side win (or lose) and the cards provide the storyline to help place that contribution in the context of a baseball game. It’s up to the manager (i.e. you) to take the cards dealt him, analyze the situations that arise and utilize his ballplayers and pitchers skills to maximize his odds of winning. I’m hoping that these elements will make High & Tight a successful combination of a card management/dice-rolling family game and a flavorful baseball simulation.