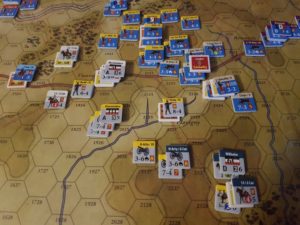 Alvensleben (yellow) has taken over the defense of Flavigny from 6th Cavalry Division (dark green), setting up formidable artillery positions on the heights behind the town. Meanwhile, Canrobert’s VI Corps (yellow) is advancing on Vionville, defended by 5th Cavalry Division (white).

Yet again the Bazaine’s Malaise chit was drawn early (put on Frossard’s battered corps to keep him from rallying or assaulting Flavigny again), yet again the activation chit for the affected formation was drawn so late the Bazaine’s Leadership track was stacked to the max! Of course, Frossard’s II Corps (khaki) passed its roll and activated normally, although did little but some rallying, ammo replenishment and withdrawing its cavalry from the outskirts of Vionville to unmask that town for Canrobert’s gunners.

LeBoeuf (red) and Ladmirault (green) continued their march, although Metman’s division from the formers decided to take a break (OOC Frozen) while Lorencez’s division appeared on the road from Metz behind them. 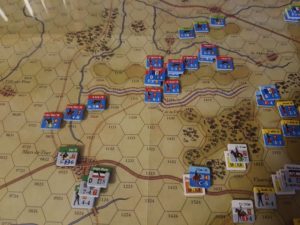 Voigts-Rhetz’s X Corps (green) has won the race to Mars-la-Tour, just ahead of LeBoeuf’s cavalry (red). Ladmirault’s IV Corps advance guard (green) has reached Bruville, but the main body of the corps is still some distance away.

Again, the roll for faster Prussian reinforcements during the 1 pm Turn End Phase failed, but so did the roll for the French CIC chit (small comfort). 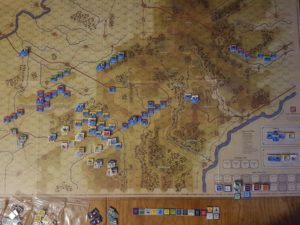 A view of the whole battlefield at the end of the 1 pm turn. Off to the east, Lorencez’s division from IV Corps (green) is watching Metman’s division from III Corps (red) with some wariness, fearing a traffic jam as they enter the forest. Most of the casualties so far have been suffered by Frossard (khaki) and Alvensleben (yellow).

Ladmirault’s IV Corps (green) was the first to activate, marching on, and leaving Lorencez’s division in the rear hurrying up, although choosing a different road than Metman’s division from III Corps (red), not wanting to get caught in a traffic-jam on narrow roads through the forest.

Things actually started well for the Prussians. Two chits were put on the Prussian Aggressiveness track, the Prussian CIC chit appeared, then Rheinbaben’s 5th Cavalry Division activated and broke the French artillery stack on the heights with fire from the horse artillery in Vionville, one unit of which then relocated, allowing Buddenbrock’s remaining infantry brigade to take its place while his divisional artillery shook some more French gun-crews on the heights. Voigts-Rhetz’s small X Corps (green) then took possession of Mars-la-Tour.

Alas, by the time the Bazaine’s Malaise chit appeared the French track was again fully loaded so the chit ended up on the reinforcement track instead to hopefully be of at least some use.

Alvensleben’s activation (yellow) saw Frossard’s last fresh brigade and some more divisional artillery casualty reduced, but III Corps’ cavalry unit (which was OOC) took it upon itself to charge (Advance!) the French Corps Artillery and was disrupted and unable to complete its assault (SP “0”). 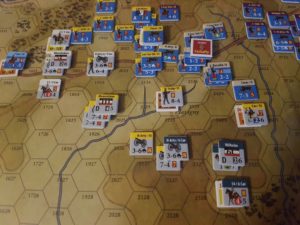 Flavigny remains in Prussian hands. Frossard’s II Corps (khaki) has taken a terrific beating, not a single fresh infantry brigade remaining. The defense of Vionville has been strengthened with the addition of a III Corps brigade (yellow), but Canrobert’s VI Corps (also yellow) is looming large and numerous, despite the loss of a large part of its artillery.

LeBoeuf’s III Corps (red) began crossing the Fond de la Cuve ravine in strength, even as its horse artillery began sending shells into Mars-la-Tour from the hill to the north of the town, while Metman’s division way off to the east was still taking a break (OOC Frozen). 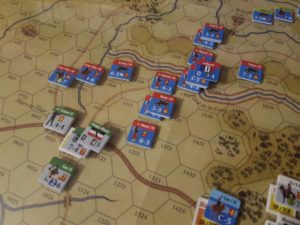 LeBoeuf’s III Corps (red) is racing across the Fond de la Cuve ravine bridge, trying to deploy in order to overwhelm the still limited number of Prussians in Mars-la-Tour.

The French Imperial Guard (purple) began to form a ring of guns around Rezonville to protect it from any Prussians eventually showing up along the road from the south. Canrobert’s VI Corps (yellow), going into Aggressive Posture (Command Initiative, as I hoped it would gain a few Low Ammo markers this turn, which was not to be) began surrounding Vionville, peppering the town with bullets and shells to little effect (but suffering no ammo shortages).

Wilhelm’s 6th Cavalry Division (dark green) was the last formation to activate, taking a potshot at Frossard’s Corps Artillery but failing to connect. 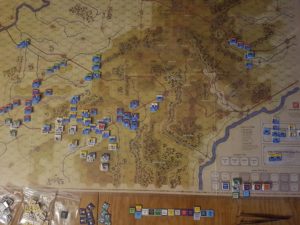 A view of the whole battlefield at the end of the 2 pm turn. The Prussians have some good artillery in place but a mere three brigades of infantry, facing the full might of three entire French corps.

A Degrade Next Chit FOW Event didn’t stop Canrobert’s VI Corps (yellow) from unloading everything it had at Vionville; so many shells were fired both remaining artillery units ran short of ammo (including a double “10” on the “C” CRT column as the very last roll, breaking both already disrupted defending units), with only the 6th Cav horse artillery surviving (barely, retreating two hexes), leaving Vionville empty.

The French Imperial Guard (purple) built some Hasty Works in and around Rezonville, soon joined by the Army Reserve Artillery (white), waiting for the tardy Prussians from VIII and IX Corps to show up from the south…

Vionville and Mars-la-Tour Gets A Reprieve
Rheinbaben (white) managed to send his still fresh second horse artillery unit into Vionville, but without infantry support, it was a fragile defense indeed.

The Bazaine’s Malaise chit showed up and was put on LeBoeuf’s III Corps (red)… now to wait and see when that formation was to activate; the Bazaine’s Leadership track already had two chits on it! A third chit was placed there on the very next draw, so French tardiness in this session seemed unlikely on this turn as well…

…but amazingly LeBoeuf rolled a 10, and thus remained passive, dismayed by the unexpected presence of Prussians in the vital town. This meant Ladmirault’s IV Corps (green) was getting closer to its sister corps, its advance guard cavalry already crowding into the III Corps ranks.

6th Cav (dark green) relocated its horse artillery slightly to better protect Flavigny against Canrobert’s VI Corps (yellow) to the north. A Krupp’s Guns chit sent Alvensleben’s horse artillery (yellow) into Flavigny as extra insurance the town wouldn’t be left empty if yet another Prussian infantry brigade (the only one remaining on this side of the field) decided to kamikaze itself.

Voigts-Rhetz’s X Corps (green) finally showed up in some strength, another three brigades of infantry and extra artillery hurrying down the roads toward Mars-la-Tour. Meanwhile, the Prussians reduced the closest French brigade with accurate artillery fire. 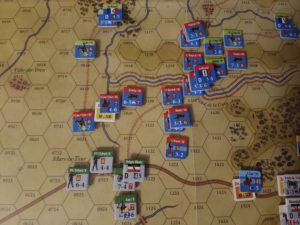 The outnumbered Prussians in Mars-la-Tour have finally been reinforced, adding an additional brigade to their strength to resist the oncoming French III Corps (red), but both Ladmirault’s IV Corps (green) and DuBarail’s 1st Reserve Cavalry Division are also approaching.

Flavigny Secured
Frossard (khaki), knowing his II Corps was shattered and unable to take Flavigny on its own, decided to ignore the building of any Hasty Works and just continue peppering the town in support of any possible assault by Canrobert later. Alas, to little effect.

As Flavigny seemed safe for the moment, with Frossard (khaki) severely weakened and the Imperial Guard (purple) busy building fortifications at Rezonville, the Prussians began looking for ways to reinforce Vionville. A Krupp’s Guns chit sent Alvensleben’s Corps Artillery into the town to join Rheinbaben’s horse artillery. Still, the lack of infantry was a major concern!

At Any Costs: BGG Page

At Any Costs: Home Page