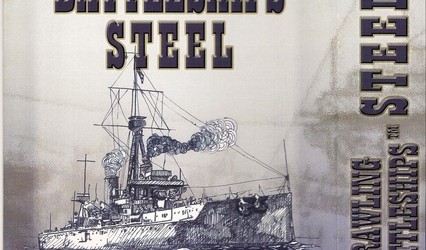 Just think of it as the World War I version of Mag-Blast.

In it from 2 to 6 players can compete against each other or in teams to sink their opponent’s battleships. However, I’d recommend playing with no more than 4 people, due to down-time and game length problems. 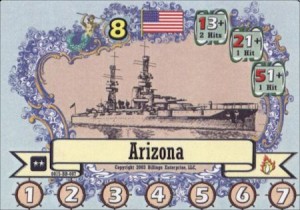 Each player in a game controls one international squadron of World War I era battleships. So, for example, you might have a squadron made up of a random assortment of U.S., British, German, Greek, Italian, French and Japanese battleships, as might your opponents. There is no “British Fleet” vs. “German Fleet” action here. This is not a simulation of the Great War at Sea, it’s an abstract game and a light one at that.

In any event, the ships in your squadron are rated for Victory Points and the side that sinks the most points wins. There is some skill involved, but it is a heavily luck based game. Though I would say, if you like the controlled chaos of Mag-Blast, you will like Brawling Battleships – Steel.

There are, of course, differences: instead of each ship having different colored turrets, each ship now has different size guns, which are indicated by having their “to hit” numbers inside square, pentagon or circular shaped symbols.

The ships themselves can take flotation, bridge or engine hits. Lose too much flotation and your ship sinks, take a bridge hit and the number of cards in your hand decreases, take an engine hit and some Random Events may come into play. However, there is no maneuvering in the game and there are no ship models involved. But I must say the cards are of a high quality, both physically and conceptually, and that’s especially important as there is little else involved. This is a strictly card and dice game. 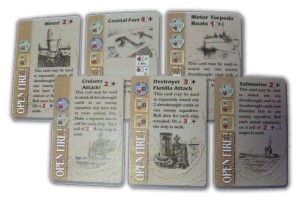 As for how it plays, well everyone, in the 4-player version, started off with 6 random ships. They then received a card for each functioning bridge in their squadron. The cards are of two types: Special and Regular cards. The special cards involved things usually outside the control of the squadron commander, things such as “good” and “bad” leadership, spies, dudes, Zeppelin and Float Plane spotting etc. The regular cards are divided into two sections: “Open Fire” and “Random Event.” The “Open Fire” section allows from one to three ships in your squadron to fire at the same time if they have the right caliber of guns. The “Random Events” section allows such things as submarines, destroyers, cruisers, coastal fortifications, Motor Torpedo Boats, straddling shots and mine-fields to attack or such defensive devices as minesweepers, confusion and booms to be employed. Most regular cards do not allow both of their sections to be used at the same time.

So, for example, your squadron might start off with a large battleship, like the U.S. Arizona, which has a value of 8 Victory Points. It can also take 7 flotation hits, one bridge critical hit and one engine room critical hit before sinking. It is armed with all big guns and its’ “to hit” numbers are “1-3,” “2-1” and a “5 -1.” This means that once its authorized to fire by the “Open Fire” section of a regular card, you would roll a pair of dice and check the results against these numbers. If your dice produced a higher number, you start to inflict flotation damage on your target. (In this case, reaching the first “to hit” number creates the equivalent of 2 hits due to the power of the Arizona’s big guns.) If this same roll was at or above the “2 & 1” level this ship would have scored another hit and if it was also at or above “5 & 1” it would produce yet another hit. Now, not all ships score two flotation hits when they first fire, so broadsides may produce from 0 through 4 flotation hits based on one card and one roll. 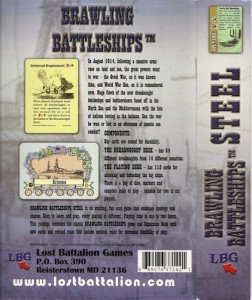 And that’s not counting any possible “Critical Hits,” generated by the “Open Fire” portion of the card used to activate the ship. So a really effective barrage from a powerful ship might knock out an opponent’s bridge or start a fire in his engine room with a Critical Hit and create enough flooding, with the help of some special cards (like “Straddle”), to sink one of your opponent’s smaller ships in one go. Of course, not every ship has large caliber guns, or is so lucky, so, they might only hit a time or two per broadside.

In any event, only a few of your ships fire per turn, and sometimes they don’t even do that much, what with players being restricted to playing one regular and any number of the much rarer special cards in a turn. So, if you want to repair your ships or try to get reinforcements for your squadron, which would require the right Random Event being activated and possibly the right die roll, your squadron won’t even be firing that turn.

In our last game we sank about 8 ships from one team and about 6 from the other throughout a 2 hour game that ran through the deck once. While cycling through it two or three times is also possible, I’d recommend against doing so, as even a fun game, like this one, can get tedious once you hit the 3 hour mark.

Like Mag-Blast, this is a Beer and Pretzels game. But if that’s what you are looking for, it’s a good one.