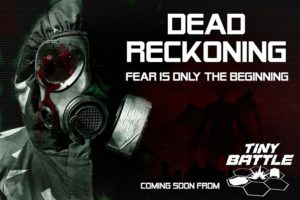 “Dead Reckoning” is a new zombie wargame from Tiny Battle Games. It should be coming out in a few months. Hermann Luttmann is its designer, I’m it’s developer and Tim Allen is the artist.

“Dead Reckoning” tells the story of a zombie attack on a suburb of Denver, Colorado. It’s the first of a possible series of “mathless” wargames. In that it has no Combat Results Table, or Terrain Effects Chart, or multiplication or division.  However, there is still a little addition and subtraction.

If it is successful we’ll probably use it as the engine for more traditional wargame subjects. It will be the third series we are working on at the same time, so things are humming around here. (That’s the “Blind Swords” Civil War series from GMT/Revolution games, with “Stonewall’s Sword” and “Thunder in the Ozarks” coming out next; the “Semper Sci-Fi” series from Tiny Battle, with “Invaders from Dimension X! and “Space Vermin from Beyond!” already out and now a new “Dead Reckoning” series also from “Tiny Battle Games.”