Massive Conventional Conflict Plays Out in ‘Next War: Korea’ 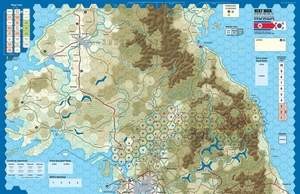 The next War: Korea was designed by Gene Billingsley and Mitchell Land. It was published by GMT Games in 2012.

The thought of war erupting on the Korean Peninsula is scary enough. But what’s really frightening is that no one can be sure what kind of conflict it will be. A battle of ballistics — their missiles against ours? A full-scale North Korean invasion of the South? Or an invasion of the North to secure weapons of mass destruction from a regime starving into collapse?

“Next War: Korea” from GMT Games will not provide all the answers. But if you believe that a second Korean War will be a massive conventional war, this game will provide the opportunity to explore how the conflict might unfold…….