Trucker’s Guide to the Galaxy 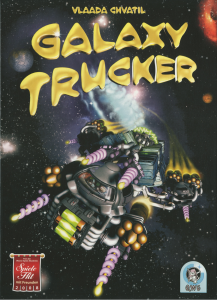 Its hard to decide just what to call the Trucker’s Guide, which is equal parts Euro Game (you can’t kill any of the other players, at least not directly), part strategy game, part hand-eye co-ordination test and two parts luck.And, unlike that other, more famous guide to the galaxy used by travelers across the stars, the answer to the puzzles of the Trucker’s Guide is more than certainly not 42.You play the game in three rounds, which should take about an hour or so, not counting the time you spend groaning, cursing the fates or just laughing. The instructions are a hoot.In each round, players build a space ship, selecting guns and shields, cargo bays and engines, crew compartments and special sections for alien crew members, should you want them.They you go flying off, collecting cargo, blasting pirates and meteors, dealing with threats to your ship and your crew, and finally landing, collecting money for the good things you have picked up and then spending money to replace the parts of your ship that have been blown away by those meteors and pirates and other space nasties.Sounds simple. And, mostly it is.But, its hard to navigate around the two driving mechanisms of the game – the deck of adventure cards that you run through at random and the actual building of your ship.

The game begins with a disorderly pile of face-down ship components, which must be linked through connectors in order to become part of your space ship. You pick one up face down, bring it to your ship and then look at it. If you want it, and if it fits, put it down in a ship box. Don’t want it, put it back face up. Not sure, put it on your card as a reserve piece, which means no one else can take it. And, if you don’t use it, you have to pay for it at the end of the trip, just as if it were blasted away by an meteor.

A smart player would build redundancies in their ship, put in lots of  engines and crew and guns, and have adequate cargo space. But, as you  pick up each piece, there is the problem of connecting them.  Some pieces have single connectors, which do not connect with double  connectors. Some have triple connectors that connect to everything,  while some of the four sides may have no connector at all, which means  nothing can connect to it.So, to hold or not to hold, that is the question. Is it better to use a piece that will cut you off from further expansion on one line, or to suffer the slings and arrows of outrageous opponents, who are pulling pieces just as fast as you are, especially those that are face up, taking what could otherwise by your shields and your guns?

Three ships on the start line

In the games I have played, no one has ever completely filled all their ship boxes. And, since the first ship completed gets to move first (or last, depending on what strategy the builder uses), it may pay to simply declare your ship finished rather than slowly fill it while others launch off on their trip ahead of you.

As you speed through the galaxy, you will find people shooting at you, which can knock off a ship component. Or, since the shot location is random, it may do nothing at all. And, in the pecking order, if pirates attack, the first ship in line – the one which moved the furthest and fastest – gets to fight them first. Win and you get a treasure, lose and you lose a ship component. And, if you win, the pirates go away. Lose and they attack the next ship in line, and maybe the ones after that.But being first is good if you encounter a solar system. The ships land on any planet they want  to (one ship to a planet) and pick up different cargo, with the first ship in the line deciding where to land first. 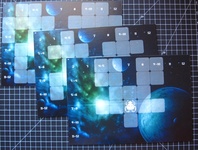 Getting through a round is a matter of skill in building your ship and luck in the places those nasty attacks hit, and of batteries. It takes one battery to power a shield or a double gun or double engine, and if you run out, you can have real problems.

Finally you land, total up your profits and losses, and start round two with a bigger ship. And, round three has the biggest ship of all.Some strategy does manage to ooze out as you play – deciding ,for example, to take the time to peak at some of the cards you will be facing while your opponents are just working as fast as they can to finish their ships.

Fully manned and supplied Space Ship. Can you design a FTL ship made out of surplus plumbing parts? And still make a profit? The world wants to know.

So, get a beer, get some pretzels, and find some people who want to  spend an hour or so exploring and exploiting the galaxy, Or, keep the Trucker’s Guide handy for when the other game you are playing ends faster than you expected.

The Corporation that is sponsoring your trip won’t mind at all. 42

A Purple alien crew-member helping out with your ships fire-power.