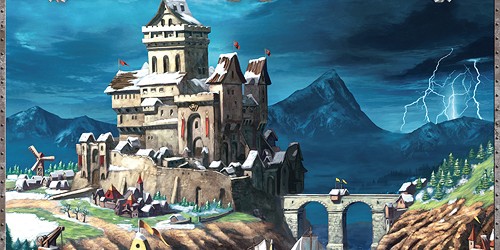 Kingsburg is a good, light, family game, especially for those people who enjoy fiddling with numbers. Although, it almost totally lacks player interactions, as do many other Euros, it is easy to learn and has a little depth. In fact, if a veteran player is present, I’d think a newcomer could pick up its basics in as little as 10 or 15 minutes.

A typical 5-player game (Kingsburg has room for from 2 to 5 players) would probably run somewhere around 2 1/2 hours. But as Kingsburgs is already a little long for a Euro, if players come at it in the wrong frame of mind they can easily stretch it into a game that is too long for what it is. 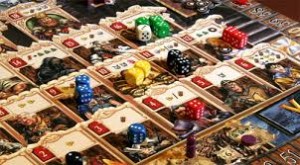 The Royal Court with each player’s dice controlling an adviser

Basically, we are dealing with a game about a number of small border villages attempting to fend off various invaders. You know, the usual riff raff of Zombies, Ghouls, Orcs, Goblins and barbarians. Fortunately for them, (the villagers, not the invaders) the King has sent them a group of up-and-coming royal favorites (the players) in the hope they will turn the tide. And while these characters start with no resources to speak of, they may draw on the advice and help of any of 18 members of the Royal Court.

Beginning with the the lowly Court Jester, from which a player can obtain one Victory Point, and grading up through to the King and Queen themselves, who, as you would expect, shower their favorite with all manner of interesting things.

That is, each adviser is numbered from 1 for the Jester through 18 for the King, which corresponds to the number of pips a player must place on their portrait in order for them to deliver their supplies. Players may then use these supplies to build various structure that enhance his village’s economy and its defensive abilities.

A village’s  economy, therefore, revolves around obtaining three commodities: gold, wood and stone. And it’s defenses revolve around the number of soldiers a player can raise and the number of defensive structures he can build. 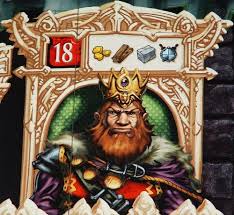 The king may be “controlled” by placing dice worth 18 points on his portrait. In turn the player who first accomplishes this will receive one piece of gold, one block of wood, one cube of stone and one soldier, which he may then use to jump-start his village’s economy.

So, for example, if a player rolls a “1,” “2” and a “6” in the first round, he might place his “1” die on the Jester and obtain 1 VP, or he could combine his “1” die with his “2” die and place them on the number 3 adviser in the court. In such a case, he would get a piece of wood. Of course, this player could also combine all 3 of his dice and get the number 9 ranking court adviser to supply 1 wood and 1 gold OR 1 wood and 1 stone. As is obvious the higher you roll the better the results of your pleas.

But then again, the fewer dice you use to reach these higher levels the more advisers you can control in any one turn, as play continues in a season until all the players run out of all their dice.

Now, one of the limiting factors of this system is that only one player may have the attention of any one adviser in a season. So, for example, whoever gets to the King first gets his sole support. The other players simply have to make do with any of the other 17 advisers who are still open to persuasion.

This mechanic does lend itself to some slight player interaction, as players may attempt to block each other’s moves. For instance, if a player who has gone earlier in a season happens to have one die worth 5 pips left and you happen to have two dice worth “2” and “3” remaining, you could possibly combine your dice and decide to influence the number 5 adviser. Your opponent, in this situation, would then be blocked from using his sole remaining die (but, if it’s late enough in the game, he could possibly use a + 2 DRM chit or the special powers of the village market – if he built one, that is –  in order to add or subtract “1” from his “5” dice). So blocking is possible, especially early in the game when players lack the power to modify their dice.

But this is just not that terribly profitable a strategy in my opinion. Yes, you might block an opponent from using one or two dice once in a while. But this, in turn, insures you an enemy who will in all likelihood simply retaliate next season. And seeing that as the game progresses it becomes progressively harder to block someone, its just not that big a feature in most games. At least not when we played. 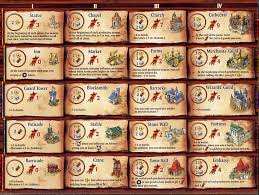 An example of a village in Kingsburg. There are four columns running from left to right. players may build any structure list in the left hand column at any time. Once that box is filled player’s are free to expand into an  adjacent box in column two, then into column three and, finally, into column four at the rate of one building a session.

Kingsburg’s “tech tree” is  presented as a 5 by 4 grid pattern (shown on   the left), which also doubles as the village’s schematic. Players may    always  build any structure  listed in the grid’s left  hand most column  but they may only expand horizontally from there.  Each building  provides  different and important  benefits. But players  will  never have  enough  resources and/or time to  build them all. And, as  you  would  expect,  some of  these building are more  important than  others.

For  example, the Chapel, which appears at the top of column two,        allows  you to re-roll  any set of three dice that totals  less than “7”. This  can be  an extremely  important factor in the early going as any player  who  finds  himself in such a situation is in big trouble. Unfortunately,  the chapel  is not open to construction at the  game’s start, so  occasionally, as player  with terrible luck early on will find himself out of  contention after only a few  minutes of play. Yes, he will have a  pleasant  evening with his friends and he will get to build a nice little frontier town  to defend, but, no, he won’t win.

Of course,  besides the Chapel there are other ways of moderating bad  luck,  such as by obtaining a +2 DRM chit from an adviser or building a farm, which  allows you to roll a fourth die. But again these  options are not available at the start of a game when bad luck can simply overwhelm you. 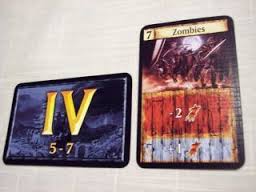 An example of an “invader” card for the fourth year. Players know this invader’s strength will be between 5 to 7 strength points before the card is activated. Once it is turned over, this card’s actual strength happens to be “7” as shown in its upper-left hand corner. Plus those players who are defeated by these invaders will be penalized 2 VP as shown in its central red portion. However, those player’s who win, will gain 1 VP as shown in this card’s lower blue section.

Fundamentally, a game of Kingsburg consists of three seasons per year in which players gathering supplies and build structures and one period a year when they must fend off invaders. There are 5 years in a game and whoever earns the most VPs at the end of the king’s “5 Year Plan” wins.

However, Kingsburg also has some problems beyond those already discussed. Although, how important they are will depend on the particular group of players involved. 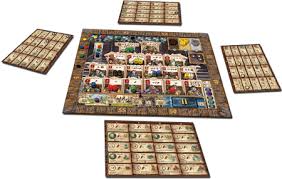 The main board represents the Royal Court and the King’s advisers. Each position on it is numbered from 1 for the court jester through 18 for the King, himself. The smaller cards shown around the court, are the individual villages each player has been assigned to defend.

First, I won’t play this game with anyone who suffers from paralysis by analysis as it allows each player an awfully wide range of options.

Second,  surprisingly enough, the invaders that are so prominently mentioned are not particularly ferocious. And with a little planning they are almost always repulsed without little or no losses.

So, this game is not perfect, but I’d  play it again if asked. I would suggest, however,  that someone come up with a variant that cuts back on the effects of bad luck  early on. Perhaps something to do with each player starting with a handful of +2 DRM  counters, which can be used as required. After all, this is a fun, light, resource management game, so why not provide players with all the tools they need to balance it? 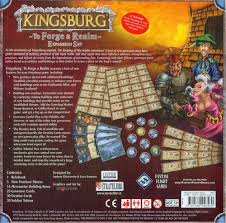 The back cover of Kingsburg