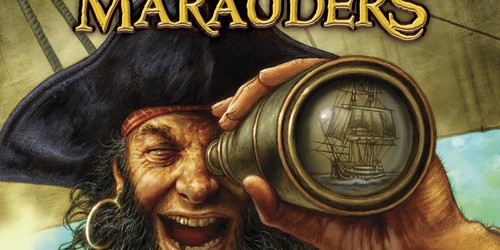 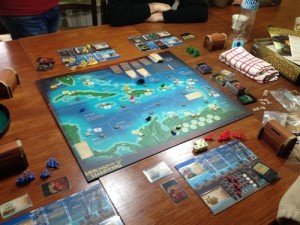 At Origins last summer, three of us tried Merchants and Marauders, a Euro published by Z-Man Games in 2010 and designed by Kasper Aagaard and Christian Marcussen. It’s basically a theme heavy, area movement game about pirates and merchants in a 17th century Caribbean. But it’s best to think of it as a combination of a railroad game, because you deliver various goods to various ports, a Space game, as you upgrade your ship in numerous ways, a Quest game, as you could go on mini-adventures based on rumors and Junta, because you stash your loot in a “Swiss” bank. There were also cards that generated random events, such as the mini-adventures, but it isn’t a Card Driven Game. 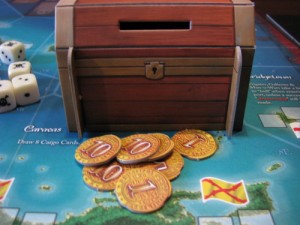 Each player has his own “Swiss Bank Account” in the form of a treasure chest.

And while I must say its production values were quite high there were just some things about it that annoyed me no end. In our game, for example, we played for 3 hours, which isn’t that long for a good wargame but we basically spent all that time doing the exact same thing over and over again until one of us (Harvey) reached the magic 10 Victory Point total. I say “magic” because there was no logical or rational reason to play to 10 or stop at 10. Why not play to 6? It was a 3 hour Euro after all. And it wasn’t like the first turn was any different than the last one anyway. And while the random factor was not as high as Arkham Horror, it could get high. Unfortunately, at least in our game, players had to choose between random, exciting and losing strategies involving pirates or dull, structured and winning ones involving merchants.

So, Gary started a second career as a full-time pirate. He had some success, some excitement and came in second. All he now needs is an eye-patch and a parrot, as he’s got the patter down cold. Harvey, on the other hand, won going away as a highly successful merchant and I, not having realized that specialization is the key to this game, ended up mostly being chased around the Caribbean by various pirates (hello, Gary) when I wasn’t dodging Storms at Sea. So Harvey picked the dull Merchant strategy and won, while I picked the exciting Merchant/Pirate strategy and lost. There’s something wrong here. Merchants and Marauders Game Board 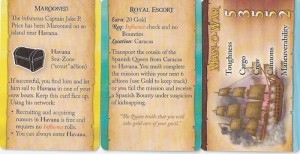 A sample of random events cards and a “ship” card.

Now, there is a good game in there somewhere. But the designer or perhaps the developer seemed somewhat rushed. Besides the balance problem there was a minimum of player interaction. Unless you worked awfully hard (and against your bottom line) it was the typical Euro “multiplayer solitaire” game. And, what made is worse was that this was completely unnecessary. After all, they already had some interesting mechanisms worked into the design.

For instance, they included naval warships on permanent patrol with the mission to find and eliminate pirates. But the system ran the warships! What was that about? The most exciting part of the game is given over to the AI? Why not let someone BE the Navy player? He could then chase pirates for a living. Or why not have each player control two classes of ship: one a warship and one his normal merchant and/or pirate ship. Each game-turn would then have players moving his free-lance ship AND his warship. That way everyone would have an interest in what happened when it isn’t their main turn, as the navy moves could take place in a reaction phase.

An example of some privately painted fleets in Merchants and Marauders.

Also, why have the mini-adventures always involve one player going to an island and finding (or not finding) something by himself? Again, no player interaction and again, completely unnecessary. Why not have a player hear rumors that the King of England had just put a 2 VP price on the head of that notorious pirate whose last known position happens to be the seat to your right? Once again, we have a game with an awful lot going for it that just needed that something extra to make it to the top.