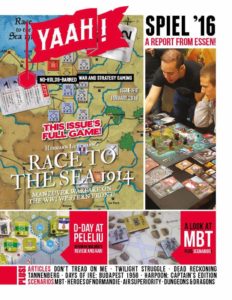 This is the cover to Yaah! #8. Hermann Luttmann’s “Race to the Sea -1914” is the issue game. I was its developer and Tim Allen was the artist. That is, all the usual suspects were involved. It uses a dice-less combat system modeled after the one inaugurated in “Dead Reckoning.” Speaking of which, I also wrote a nice article concerning the proper strategy and tactics for playing “Dead Reckoning” in this issue.

2017 is going to be a very busy year for Hermann, Tim and I. We’ve already seen “The Race to the Sea -1914” published in Yaah! #8 just recently (no matter what date slipped onto the cover).

This year we are also scheduled to see “Crowbar! The Rangers at Pointe Du Hoc” being published for Flying Pig Games, “Miracle at Dunkerque” for Legion Wargames and “Like Hailstones on Housetops: The Battle for Culp’s Hill” for Hollandspiele. Plus Colby Duerk, a developer/playester for my “Space Vermin” will be designing the third Invaders-series game called “Attack of the Colossi” for Tiny Battle Publishing. And those are just the front-burner solitaire games.

I’m particularly interested in seeing the Culp’s Hill game get published. I think it will be the first one on this subject, which is kind of amazing considering that just about everything having to do with Gettysburg has been covered multiple times. I’ve a theory that a game on Culp’s Hill hasn’t seen the light of day because the situation there was just too dared chaotic for traditional wargaming systems to handle. But if there is anything we specialize in its chaos, so we’ll be giving it a try. As usual Herm will be the designer and I’ll be the developer.

We also are looking forward to Revolution Games publishing the long awaited “Longstreet Attacks, the Second Day at Gettysburg,” which was known as “Hammerin’ Sickles” when it was on the GMT P500 list. It should be available to the public sometime around September. In fact its undergoing final playtesting from our group right now. After that it goes to Revolution and an independent set of beta playtesters for extensive blind testing and then onto the printer. 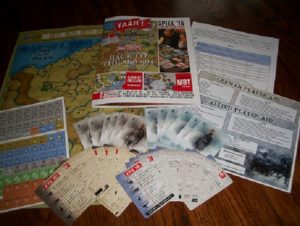 Three’s a surprisingly lot of material in Yaah! No. 8 for a magazine game. We are very satisfied.

We also have “At Any Costs: Metz  1870” from GMT on the schedule, which should see publication in 4Q17. It also uses the “Blind Sword” system, but at the brigade level, this time. Plus we have another zombie game on the back burner (you can’t have too many zombies games in this market) possibly for Compass, another SF solitaire game in development (its needs playtesting for play-balance purposes and final art work), another game on World War I for Yaah! (it’s in the concept stage) and finally a game in the Russo-Japanese war (also in the concept stage).

That a possible 11 games, if I’ve counted right. At this rate we’ll be turning out more games than most companies. Wish us luck.

PS: In any spare time, we’ll be helping out Kirk with his newest game for Compass and Harold Buchanan with a game for Revolution among others.