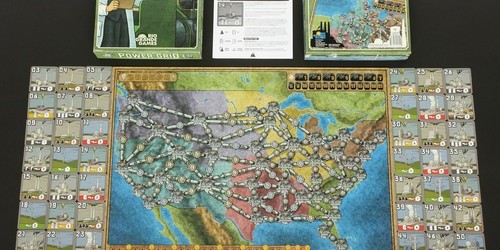 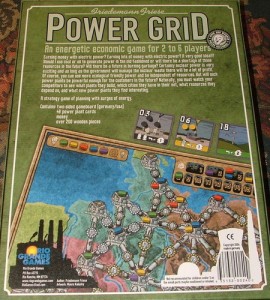 Power Grid back cover- via BGG

We’ve played Power Grid, one of the top 5 or 6 most popular games on Boardgamegeek, a couple of times now, and while that’s not enough to make us all experts, it is enough for us to form opinions.

Power Grid was published, or perhaps I should say re-published, in 2004 having first come out as Funkenschlag in 2001. As is apparent by its original name it’s a Euro; with players building independent power grids across the US (or if you want, Germany, as the mounted map’s reverse side can be used to change locations).

The cities on these maps are connected by pre-priced routes, representing the fixed cost of building power lines between them. The game itself is divided into three phases: the first, which runs from the start of the game until someone gets 7 cities connected and powered, the second and then the third phase, where in a four player game the victor is the first player to connect and power 15 cities.

Each phase of the game allows an extra company to wire any particular city to a grid, so, for instance, New York, which starts with one power company, would eventually move up to having two or three companies running lines through it. This limitation allows players who were not careful to be penned into one corner of the board. In these cases, their company would then face the difficult choice of paying double (or triple) prices for the long distance power lines they need to expand beyond their competitor’s system or waiting until a new game phase kicks in when the cities in their opponent’s network will allow more power companies to build lines through them. 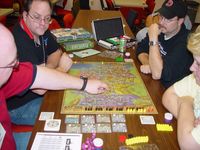 Basically, power company networks consist of power stations, cities and the high-powered lines used to connect them, with players competing to control and then power the biggest power grid in the country. Bigness being measured by the number of powered cities in a company’s grid. Player interactions are restricted to the reach of their grid on the map and the bids they place for the power plants that comes up for auction.

The decision either to bid on these plants or not then becomes one of the most important factors in the game as each plant is restricted to using coal, oil, garbage, nuclear or wind power as fuel. One of the many nice touches to the game is that you may only use three plants to power your entire network. So you have to balance your need for cheap but lower powered plants early in the game when you have few cities against your eventual need for big and expense plants when you have over a dozen to power. And all the while you must take into account the types of fuels you and your opponents will be locking yourselves into.

That is, plants may be both expensive to set up and expensive to run or they might start out economical and become expensive to operate, because fuel costs will vary as the game progresses. For example, if everyone piles into building cheap coal-fired plants, the limited supply of coal and its increased demand will cause its price to sky-rocket.

But while fuel prices may fluctuate, wind power is “free.” So why not go all wind powered? Well, wind power turbines start out expensive and only go up from there as your opponents try to outbid you in order to lower their own fuel bills. So the decision to construct a particular type of power plant must take into account the changing needs of both you and your competitors.

Accordingly, we’ve got a game of wheels within wheels.

But how does it play? 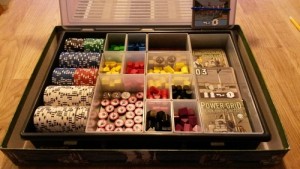 Some Power Grid components – via BGG

Well, while we aren’t experts, from a grognard’s point of view I’d ask “where is the ability to snatch victory from the jaws of defeat? So Power Grid is never going to replace Hannibal: Rome vs. Carthage or Victory Games The Korean War on my table. But that’s me. If your group doesn’t suffer from paralysis by analysis and is looking for a high-quality “connect the cities, manage your resources, do math in your head but don’t hurt your opponent’s feelings” game, this is it.