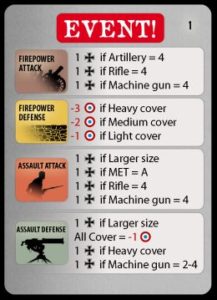 This is a typical Combat card for Hermann Luttmann’s new game “Kindermord: The Race to the Sea 1914.” I’m its developer and Tim Allen is its artist. It should be available from Flying Pig Games through their Yaah! magazine in a few months. We are almost done playtesting it and it’s a blast.

In order to show the adaptability of Hermann Luttmann’s “Dead Reckoning” (DR) system we’ll be using it in the near future in more traditional wargame settings. For example, it will shortly appear in Yaah! magazine’s “Kindermord, the Race to the Sea 1914.“

As far as we know this campaign has never been the focus of any game. “Kindermord” tells the story of World War One’s Western Front from the Battle of the Marne through the end of the First Battle of Ypres, in November 1914, when the German and the Angelo-French forces each attempted to turn their opponent’s open or northern flank in a series of meeting engagements, until, that is, they ran out of land along the English Channel.

“Kindermord” will include point-to-point movement for railroad strategic movement over a hex grid map for regular movement, plus it will have false reports, changes in high command and reinforcement/replenishment actions. While the random events will involve such incidences as Steel Rain, a Mad Minute and Planned Operations etc. Each corps will be rated for size, morale, type (infantry or cavalry), plus rifle, machine gun and artillery strength. Artillery is sub-divided by special support characteristics, either the French quick-firing 75mm guns (“Soixante-Quinze”) or by heavy artillery assignments. The maneuver units will be corps. Defensive terrain will include rivers, towns and cities. Victory Points are earned by how much better a “Western Front” player can create for their side than what was accomplished historically. 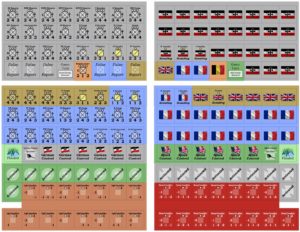 This is the countersheet for “Kindermord: The Race to the Sea 1914.” The game comes with a map, this countersheet and 2 sets of cards, which are further divided into an Initiative deck and a Combat deck for each side. Players bid one Initiative card a round to see who goes first. The highest numbered bid wins and players then may conduct that total number of actions they bid in that round.

It will not have a Combat Results Table, or a Terrain Effects Chart, or dice or multiplication or division. In fact, its hexes aren’t even numbered! But it is, nonetheless, a true wargame, that will take into consideration the relative size of the attacking and defending forces, their morale, their weapons, their speed and tactics and the defender’s terrain. It accomplishes these remarkable feats by using combat cards to create a narrative for each encounter.

Kindermord itself or “the massacre of the innocents” was a controversial incident that occurred during this campaign. It was said that the reserve German Corps, made up of mostly young, inexperienced student volunteers, went into battle singing “Deutschland über alles” and where subsequently gunned down in great numbers due to their launching frontal assaults against well-prepared positions and heavy firepower.