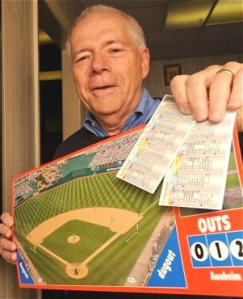 Last winter we played Strat-o-Matic Baseball for a month or so. It’s an old-school (1962) paper baseball simulation, originally designed by Hal Richman. But we used its 2009 edition with 2011 player’s statistics. Our league had 8 teams and we were able to get each manager to play two games a night.

The only thing missing from it was the human element. For example, you might have a decent enough starter with, say, a 2.5 ERA getting hammered in the first inning, but no matter how bad his initial outing, he never becomes shaken. If he’s a decent pitcher, he’s consistently good no matter what happened to him last inning.

Unfortunately, players do get injured. Tell me about it. I spent 100 points getting Dan Murphy and in his 3rd game he got himself injured sliding into second. So my best hitter was out for 6 games in an 8 game session. Otherwise things went great. Bad but great, if you know what I mean.

I managed two teams: Z.T. and Meatballs. Although it’s my sad duty to report the Spicy Meatballs got off to a slow start and the Z.T.s began the season in even worse shape. But what can you expect from a die-hard Mets fan? In fact, it was so bad for the Baked Zitis that it was said (though not by me) that their fans weren’t even up to doing a decent wave. All they managed was a micro-wave. (And who said puns are the lowest form of humor?) 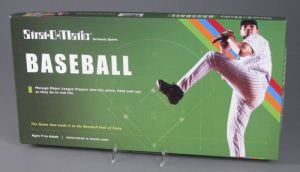 Anyway, Strat-O-Matic is a remarkable game. Just about every aspect of baseball can be simulated, in detail, including your pitcher getting tired and having a salary cap on your team. It took us about 3 hours to draft 2 teams each. I went for Batting Average, Power and Fielding for my regulars and ERA/Homers Allowed for my pitching staff. Each of my staffs have a 100 point starter and a 80 point reliever. (Out of an 850 point team cap). So I may have over concentrating on pitching. But as Yogi said, “90 percent of baseball is half pitching.”

We’ve tried APBA its long time rival but generally we prefer Strat-O-Matic. ABPA just takes too general an approach to the game for some of us. For example, players add up the total defensive strength of their on-the-field team and then use these totals to see how a particular ground ball will be handled. Strat-O-matic produces much finer details.

For example, one week the ZT’s opponents turned out to be that scrappy team “The Watsons,” as we were hosting the second half of a home-and-home series.

Unfortunately, we got cooked. You see, we had only drafted 18 players per team as that seemed to be more than enough. But, as those keeping score at home already know, The Baked Zitis lost Dan Murphy for 6 games the week before. Regrettably, the Zitis promptly opened the game by losing two more starters to injuries. (Believe me, I had a VERY strong talk with their trainer.) That left me without a shortstop or a second baseman. I had drafted a utility infielder, a back-up catcher and a second-string 1st baseman, but that’s simply not enough when you lose three everyday infielders and one of them wasn’t a catcher. Anyway, the league commissioner ruled I could call up a few Triple A players. Again, regrettably, there were some very good reasons why these guys were playing in Triple A. So the Zitis ended up losing the game 3 to 1. But, with all the turmoil involved I consider it a minor victory to have ended the game with 9 players on the field.

About then, I hadn’t a clue how Z.T. would be able to handle their traditional rivals the The Flying Dump Trucks, not to mention what they’d do against The Screaming Jellyfish, but fortunately the season ended before I needed to face those problems.

If you like baseball this is a B+ game, maybe higher. If you don’t, don’t even give it a look.