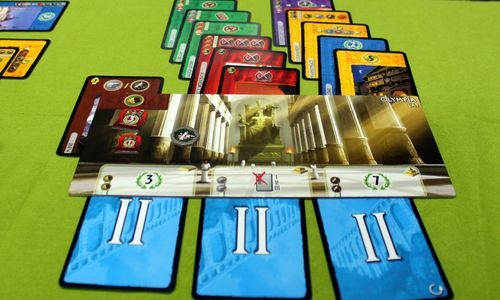 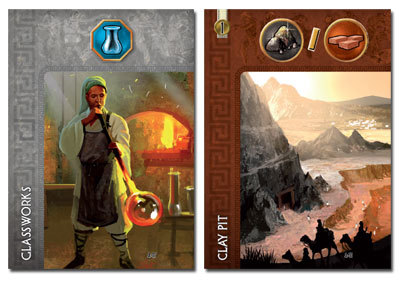 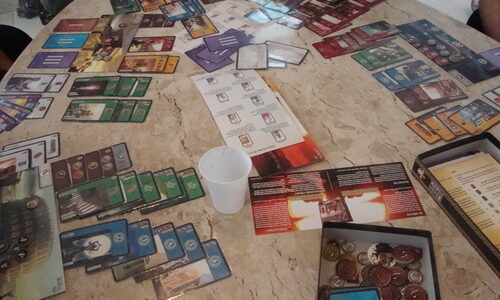 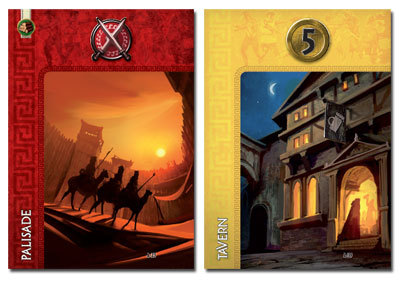 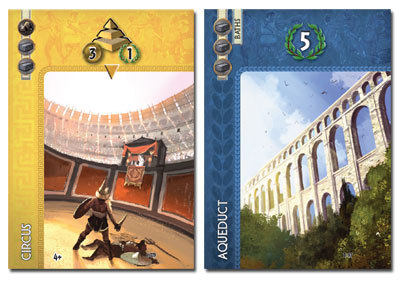 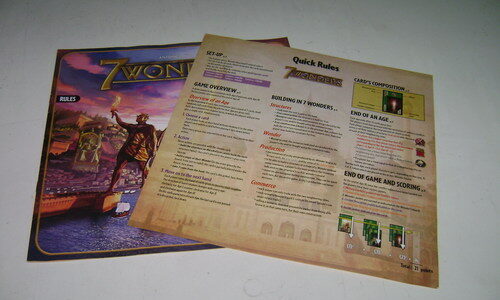 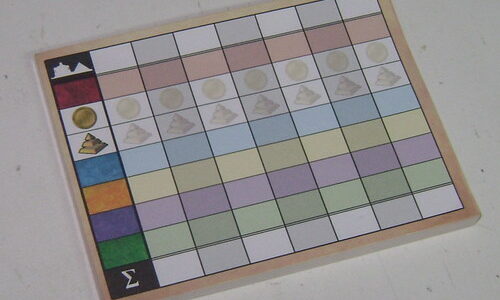 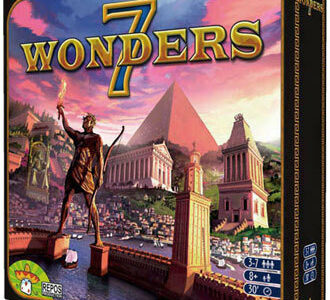 7 Wonders is a family game based on drafting cards and building your own civilization. It is also a Euro game with a surprising amount of depth.

In it there are three “Ages” (or rounds of 6 turns each) in which player’s receive cards. After picking one card from their hand per turn, they pass the remaining cards to their neighbor, with the direction of the pass changing with each Age. So a game normally provides a player with 18 cards in total spread over 3 “Ages.” 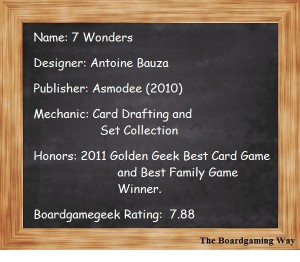 However, as 7 Wonders has so many moving parts that it is hard to see who is actually winning at any one time, its best to concentrate on scoring as many Victory Points as possible and hoping for the best. In any event, there is only a modicum of player interaction, so even if you are fairly certain of who is in the lead there may not be much you can do about it.

Normally, if someone you think of as the leader is “down stream” of you, it might be possible to use up a card he needs one way or another before it gets to him. But each card you chose to hold onto has to pull its own weight as you will be getting only 18 of them for the entire game and each has to help you get to the 55 or more Victory Points you’ll need to have a chance of winning.

Now, there are seven different, and color-coded, types of cards in this game, with each type tending to be concentrated in a particular age. In the First Age, for example, a player will normally get basic brown cards, which represent the production of primary resources, like bricks, wood or ore, but usually in small quantities. In the Second Age players will tend to get more advance resources, like textiles and glassware (gray cards) plus they may find richer veins of gold or more efficient means of generating resources, say a brown card that generates two different types of goods or twice as many resources of a single kind. The Third and final Age tends to produce medieval-style organizations with cards like guilds (purple cards), important buildings and infrastructure your civilization will need and scientific advances (green cards). But players may not build more than one structure with the same name. That is, you can’t have two libraries or two lighthouses in your civilization.

Each “Age” in 7 Wonders starts off with players being dealt a hand of 7 cards. Players then pick one of these cards, pay for it (if that is necessary, it sometimes isn’t) with resources they already generate or that they buy from their nearest neighbors and then they pass the remaining cards in their hand to the player to their left. (In the next “Age” they’d pass the cards to their right etc). However, unlike most Euro games there aren’t ore, wood or brick cubes. Players simply point to a card they have previously obtained that generates, say, brick and declare, “I’ll use that card to pay for the 1 brick I need for this new card, I’ll buy the 1 ore I need for 2 gold coins from my neighbor to my left and I’ll use this other card I already have for the 1 stone I also need.”

In addition, players may sell a card back to the game for 3 gold coins, or bury it under their main Wonder Board in order to help construct their own unique Wonder.

Normally, players will end up with 6 cards from each Age, with the last, 7th, card in their hand being discarded.

Of course, due to the strict limits on player interact there are people who look on 7 Wonders as multi-player solitaire, but if you take it for what it is you’ll have a fine time. Plus its numerous expansions do somewhat increase player interactions.

Now, I’ve only played 7 Wonders four or five times, and I’m far from being an expert, but I never mind playing it and, I must say, that is quite a compliment coming from a grognard. 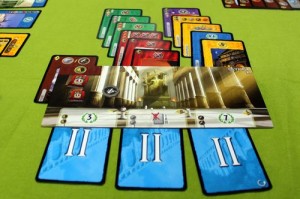 Players start with a large, basic civilization card (or a “Wonder Board”) seen here as the large whitish-greenish board representing “Olympia” in the middle of the picture. Each civilization is distinguished by its own unique Wonder Board and Wonder, which is normally constructed in three stages. In this example the player has constructed his “Wonder” by burying three (blue backed) Second Age cards under each of his Wonder’s three stages.

The cards above the central Wonder Board are what compose this player’s civilization. Brown cards, to the left, are basic resources, red cards (in the middle) are military forces, yellowish cards are merchant cards (trading posts mostly), the dark blue face up card (in the upper right) is an important but secondary building, such as a temple. At the game’s end players total their Victory Points from 8 sources and see who has won. It usually takes 55 or more points to win a game.

One of the few counters in this game are the military Victory Point shields as seen above. A military victory is solely determined by how many military units you have built compared to your neighbors. and it’s judged at the end of each Age. Military adventures can earn you, at most, 18 VP per game, which is about 30 percent of what you would need to win and it will take you about 4 cards to do it, or say 40 percent of your discretionary cards (those left after you do the minimum needed to set up your civilization).

Of course, if you get in an arms race with your neighbor that figure might increase. However, nothing else is gained or lost from military actions. And in fact their are no “military actions” in the normal sense of the words. At the end of each age players simply count up their military strength and compare it to each of their two nearest neighbors and that’s it.

The other type of counter you will find in this game are gold coins, which you’ll use to buy resources from your nearest neighbors. All the rest of the materials you’ll need to build your empire are abstracted out. So, if a card in front of you says it produces one unit of wood, it produces one unit of wood. Use it or lose it. For example, there is no trading of three wood units for 1 ore unit as in Settler of Catan or anything like that.

Now, you can also raise money by selling a card back to the game, or having a neighbor “buy” one of your products for one or two gold coins but that’s about it.

However, as each player only has 18 cards throughout the entire game and as three of them are usually used to build their unique Wonder and as your civilization will need three or so resource cards in order to start up its economy and one or two marketplace cards to allow you to obtain cut rate resources from your neighbors, we are only talking about 10 cards or even less to do everything else. So turning even a card in for its cash value is not a helpful move in most situations. 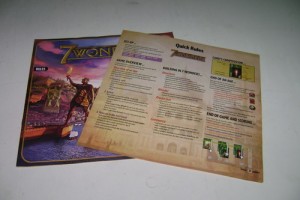 The “7 Wonders” cheat sheet. “7 Wonders” has a good 6 expansions and is an extremely popular game.

The scoring pad of 7 Wonders. There are so many ways to score that figuring out who is in the lead simply by looking around the table is quite hard. This limits any tendency to gang up on the leader, but as there are only a few ways to interfere with your opponent’s plans this game may be a bit too much like “multi-player solitaire” for some. 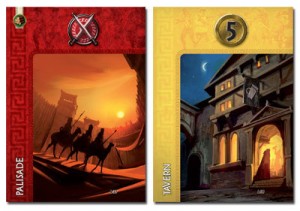 Typical 7 Wonders resource cards. The one on the left is a “One Strength” military unit that costs one pile of wood to obtain. The card on the right is a Tavern that generates a one time bonus of 5 gold pieces. There are no brick, textile, glass or rock cubes in this game. Besides the cards and the Wonder Board, there are only gold pieces and military VP markers. Basically this is a card drafting game. 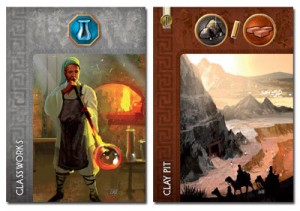 More cards. The cost of a card is listed in its upper left hand corner. The left card above is therefore free and it will generate 1 glass point when you need it to, The right hand card is a Clay Pit and costs 1 gold coin to own. It will produce either one pile of ore or one pile of bricks at a time. The name of the establishment is shown on the lower left hand corner of the card. (This is important as a civilization can not use two cards with the same name). If a card generates a free upgrade that potential upgrade would be shown in its lower right hand corner. If a card IS a free upgrade that fact will also be mentioned next to its price in the upper left hand corner of the card.

Basically what we have here a fine family game. It has some depth and some player interaction but not to much. In fact, it seems to have just the right balance of complexity and luck for a pleasant evening’s entertainment.