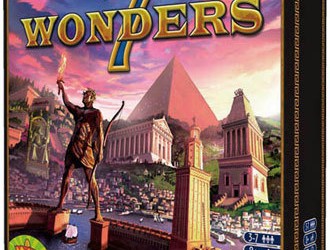 As I’m a believer in the theory that even a bad plan is better than no plan, I’ll set forth my basic strategy for playing a “7 Wonders” game. Now, realizing that I’m a new player, and far from being an expert, here is what I usually do:

1. I check the resources I’d need to construct the three stages of the Wonder mentioned on my “Wonder Card” and concentrate on obtaining them in the First Age, if possible. This allows me to maximize the use of any special powers the second stage of my wonder would provide. 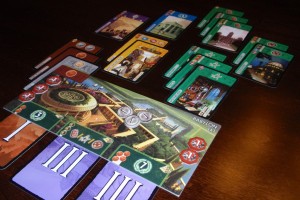 Babylon won with 67 Victory Points by concentrating on science and staying away from military cards entirely. He thus lost – 5 VP due to being defeated by his neighbors 5 out of 6 times. (Apparently one of his neighbors also did not obtain a military strength point during his First Age.) But the Babylon player was able to concentrate on collecting 8 science cards and 67 VPs for the win – BGG.

2. I try to keep the total number of brown (basic resources), gray (processed resources, like glass or textiles) and yellow/orange (trading post cards normally) to around 5 – 6. This, plus the three cards usually needed to build the three stages of my Wonder, totals 8 – 9 cards out of the 18 I’ll receive during an entire game. In other words, I can then use the remaining 9 – 10 cards to generate the VPs I’ll need to get to 55+ VPs, which is usually the minimum number of Victory Points needed to win a game.

3. I’d check to see which resources my neighbors are producing and use that to determine which Trading Post cards (the yellow/orange ones) I’ll buy. As it doesn’t make a whole lot of sense to set up a trading post to buy discounted goods your neighbors aren’t producing.

4. I try to stay ahead of my neighbors in military strength, but if one of them is going strong military I’d cut my losses. You don’t want to go head-to-head for military power as you can use up a lot of cards to win an arms race. If you can’t beat both of your neighbors, thing won’t turn out too badly as long as you are stronger than one of them. 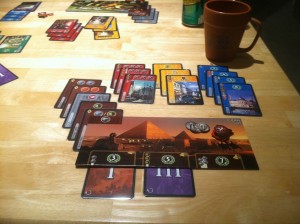 This player decided to bypass Science (green) and Guild (purple) cards and concentrate on military (red) cards and infrastructure (blue). He has not yet completed the third stage of his Wonder, which is not a requirement in any case. – BGG

5. The three cards I’d bury under my Wonder board, in order to build my own Wonder, are cards my “downstream neighbor” either badly needs or is concentrating on (I.E., if he can’t produce bricks I’d bury a brick card, if he is concentrating on science I’d bury a science card that I can’t otherwise obtain for myself. That is, some highly valuable cards cost resources you can’t produce or even buy from your neighbors. They are usually lost to your civilization, but they may be just what your neighbor is looking for.

In 7 Wonders a player starts an “Age” with a 7 card hand, he then picks one card to sell, obtain/buy or bury under his Wonder board and pass the remaining cards in his hand to his neighbor. The direction the cards move changes with every “Age.”

6. I try never to sell a card for the 3 gold coins it’s worth, unless it’s absolutely necessary. 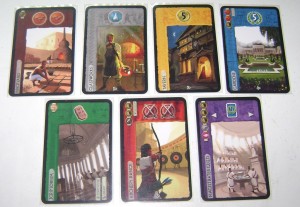 7. I never completely overlap any cards that allow me to build free expansions (the buildings listed on a card’s lower right hand corner) as that is sometimes the only way these expansions can be obtained, considering that I may not have the resources or gold to build them directly.

If you completely overlap the cards you’ve obtained previously in the game you will may end up paying for a building (possibly with gold coins) that you could have obtained for free or you might bypass that building entirely because you didn’t have the right mix of resources and coins to build it yourself.

8. I try to remember that there are no resource cards in the Third Age and that the majority of my Victory Points will be generated in that “Age” anyway.

So I like to complete my Wonder as soon as possible, as it’s second “Age” usually provides a player with some type of special ability, and then concentrate on maximize my Victory Point total from the middle of the Second Age onward.

9. I try to concentrate on only one or two types of VP cards in the Third Age. Say, green science cards if at all possible, in order to generate the maximum possible VPs. Also the right kind of guild (purple) cards can be worth any number of VPs. 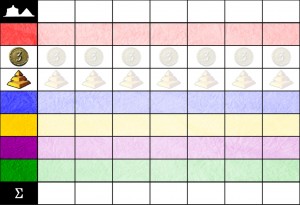 “7 Wonders” scoring card. The last line are the player’s totals, so there are 8 different ways to earn Victory Points – BGG

10. I always check to see what strategy my neighbors are concentrating on, as there are some cards in the Third Age that generate VPs based on your neighbor’s civilization. For example, if a card gives you VPs for all the brown cards your neighbors hold, and they hold 8 or 10 between them, that is a card I’d want to have.

11. I keep a copy of the icon meanings next to me as new players will never understand all the symology without it at least being nearby.

12. And finally I ask questions of my neighbors if I don’t understand what a card means. Yes, it gives away some information but you are either going to ask your “downstream” neighbor (the neighbor you will be passing your hand to shortly) or your “upstream” neighbor (who just handed you his cards and therefore knows what they look like) or you will be playing the card in question (and showing everyone what you were talking about).

Strategic Primer for the New Player