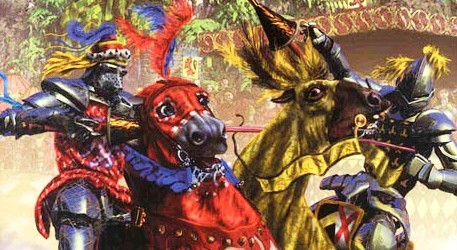 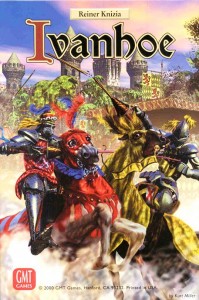 Ivanhoe comes from GMT. One of the things I truly love about GMT is their Living Rules.  The GMT website makes the latest version of the rules to their games available for download. So no matter when you bought your copy of their game, you have access to the latest revisions, possibly corrections, and/or clarifications of the rules. Bravo GMT. 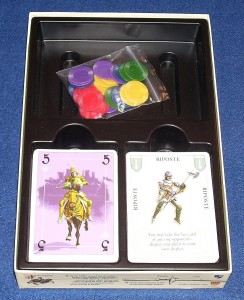 Ivanhoe comes packed in a slick looking box with artwork depicting the glorious age of Knights in armor. The Ivanhoe game components are a sturdy, well-produced deck of 110 cards. 70 cards in five color-coded suits, each adorned with a picture of a knight ready for combat. You will also shuffle in 20 Action Cards that add excitement to the game with names like UNHORSE, and DROP WEAPON. Last but not least there are 20 special cards, known in game parlance as Supporter Cards that can be used much like wild cards to bolster the value of your play as you pursue the winning of the current tournament.  But be careful, some Supporter Cards come at a cost if they support you in a losing effort. There are 25 tokens (poker chips) 5 each in 5 different colors that are used to determine who will be the first player to deal 8 cards to each player, and from then on to mark the different tournaments each player has won.

I must at this point interject that as a Grognard I would have loved to see, at the very least, a “HENRY II” card, allowing a player to “accidentally kill off” an opponent during the tournament, but alas, Ivanhoe is more of a family friendly sort of game.

The object of the game is to participate in tournaments (rounds of progressive card bidding.) A player wins a round when all other players have been outbid or voluntarily have withdrawn from play. The tournament champion is the player who ultimately wins the prescribed number of different color tokens representing the different rounds, each round representing a different medieval tournament weapon. 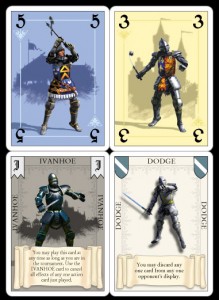 One quick note:  Withdrawing from play early in a round can lead to long periods of downtime in games between 4 or 5 participants, perhaps this will be boring for younger players, but older players might well spend this downtime counting the cards by suits and values played by their opponents.

While playing Ivanhoe my mind was taken back, not to the days of old when knights were bold, but to memories of a small kitchen table in Queens, New York,  the   smell of peach cake baking in the oven, and playing some other card game in that kitchen with my Grandma. So my friends this what I see as the reason to have  Ivanhoe on your game-shelf; when your younger children or grandchildren want to   play a game. You might try to fill their imaginations with tales of old when knights were bold, while having an enjoyable game or two of Ivanhoe. It just could be the first baby-step of what will become their life-long appreciation of combat simulation gaming. Or at least it may give them the memory of a day spent playing a family fun card game with you. 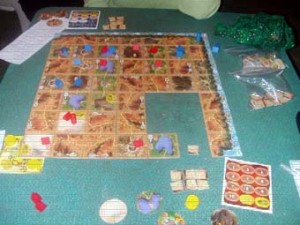