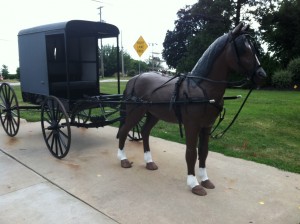 The World Boardgaming Championships for 2015 were held in Lancaster Pennsylvania (Amish country) for the last time this year. In 2016 its moving to Seven Springs, Pennsylvania, which is about 70 miles southeast of Pittsburgh, Pa. 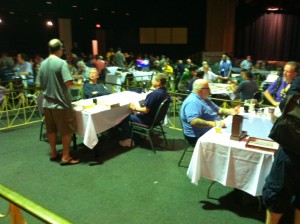 WBC draws about 2,000 attendees, of which I’d say 60 – 65 percent prefer Euros and 35- 40 percent prefer Wargames. There is one large tournament room for wargames, one medium sized room for Euros and a very large open gaming room, which is mostly filled with Euro players. This is a picture of the theater dinner room and the games played here were mostly Euros. but as I demoed wargames for 4 days most of my times was spent playing and checking out new wargames. 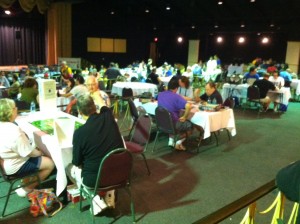 This is another view of the Euro players in the theater dinner open gaming room. 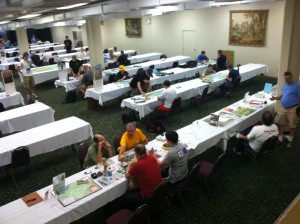 This is the wargaming (tournament) room. The far back (top of the picture) was an open gaming section, the middle section held tournaments, including a World at War “tournament”, which was composed of dozens of gamers playing ONE game each. The winner was apparently that player who most impressed the judges. The bottom of the picture (the one long table) was Designer’s Row. GMT had games on the left and MMP had games to the right. The four players in the lower center are playing one of Volko Ruhnke’s new Coin games. 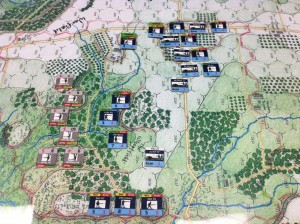 Hermann Luttmann and I also demoed “At Any Cost: Metz 1870” and “Hammerin’ Sickles: Longstreet Attacks at Gettysburg” on GMT’s Designer’s Row. This was a session of HS highlighting its Whirlpool Scenario. The Union troops at the top were defending The Peach Orchard and the units in the center are on The Stony Hill. The Confederate troops are attacking into The Wheatfield and The Stony Hill. 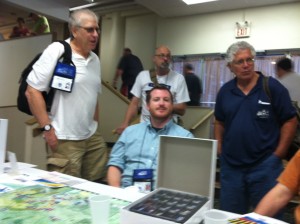 The gentleman on the left is designer Mark Herman, Bryan Armor, in the center. sitting in front of our “At Any Cost: Metz 1870” demo. and Hermann Luttmann’s arm on the far right. 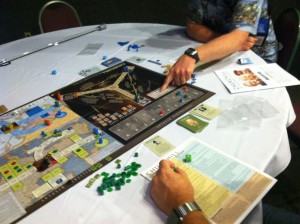 One of the hottest games, if not the hottest, at the convention was undoubtedly Mark Herman’s political-military game “Churchill.” I heard it sold out. as did Revolution Games, “Stonewall’s Sword” by the way. The darker half of the “Churchill” board concerns a three-sided political contest between Churchill (of course), FDR and Stalin at the various Big Three wartime meetings. The left half of the board represents the war’s military dimension., divided between the Pacific Theater (basically in blue) and the European Theater (most with a tan background). 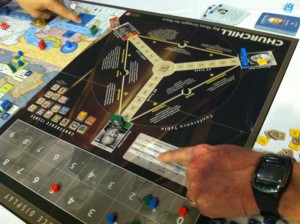 One of the many interesting features of the game was that the winner doesn’t want to win too convincingly, as that will drive the two losing parties to form a post-war alliance. I picked up a copy of the game, but haven’t had a chance to play it as yet. 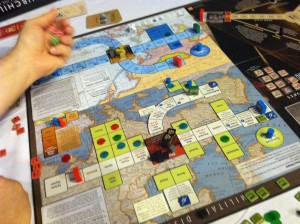 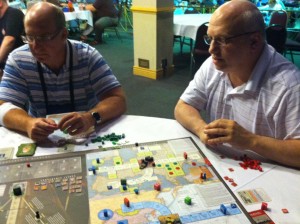 This shows Dr. Harvey Mossman, on the left, playing “Churchill.” I was present for the last half of the game, but as it was late I basically slept through his class. 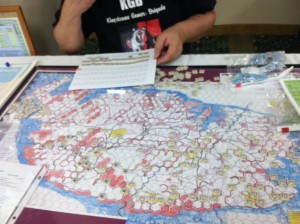 This is the playtest map for “Invasion: Malta” from GMT Games, designed by Vance von Borries. I didn’t see its designer present but the game was demoed on GMT Designer’s Row. 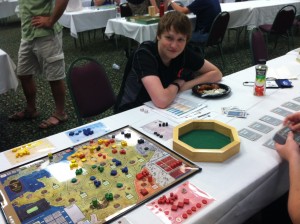 I believe the game is “Falling Sky: The Gallic Revolt Against Caesar.” an upcoming COIN game from GMT. That’s one of the game’s designers, Andrew Ruhnke, in the center. 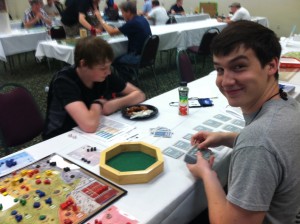 Another view of Andrew (on the left). 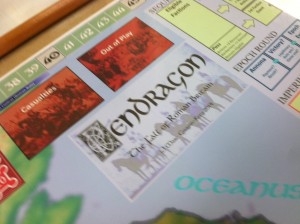 A shot of the new COIN game: “Pendragon: The Fall of Roman Britain.” The map was on GMT’s Designer’s Row but I didn’t catch anyone play-testing it to ask questions. Update: I was wrong. There is a picture on Facebook that not only has “Pendragon” being play-tested, but it has Hermann Luttmann and I in the background ! (But, in our defense, with our backs turned to the camera 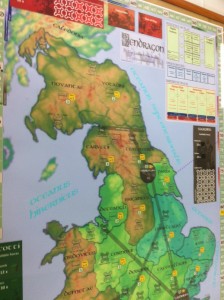 Another view of the “Pendragon” map. 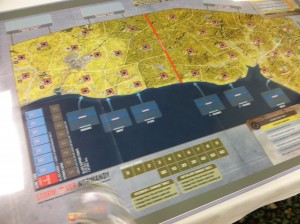 MMP’s “Storm Over Normandy” by Ken Dunn, Nick Richardson and Brian Youse. It was published in their Special Ops issue and was on Designer’s Row too.. 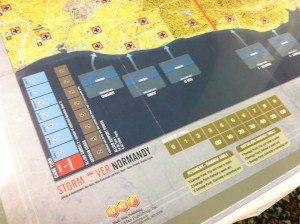 Another shot of the “Storm Over Normandy” map. 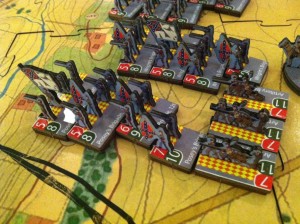 A picture of Lost Battalions Games “Rally Round the Flag” 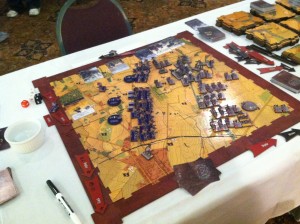 Another view of “Rally Round the Flag.” It was being demoed in the Host’s lower level, in front of the Dealer’s Room. The tiles that make up its playing field can be seen on the upper right in this picture. 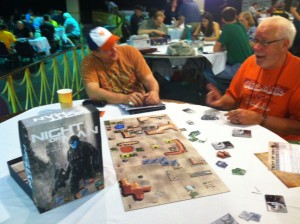 Mark Walker (on the right) demoing his “Night of Man” game in the open gaming room. 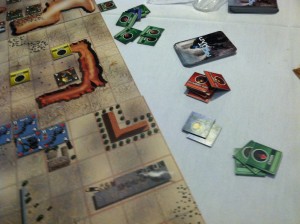 Another view of the “Night of Man” components. 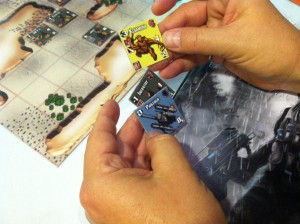 A close-up view of the “Night of Man’ components. That was Mark Walker holding the extra-large counters. 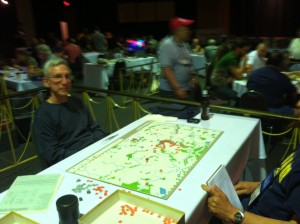 One of the few wargames being played in the theater dinner room. I believe it was the old Avalon Hill version of “Panzergruppe Guderian.” 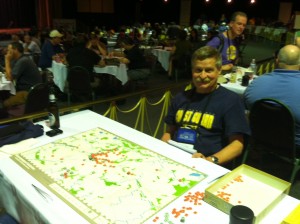 Another view of the “Panzergruppe Guderian.”

Well, that’s about it. Next year it’s on to Seven Springs, although I’m not sure who among the regulars will be attending. Goodbye Lancaster Host and Amish country.